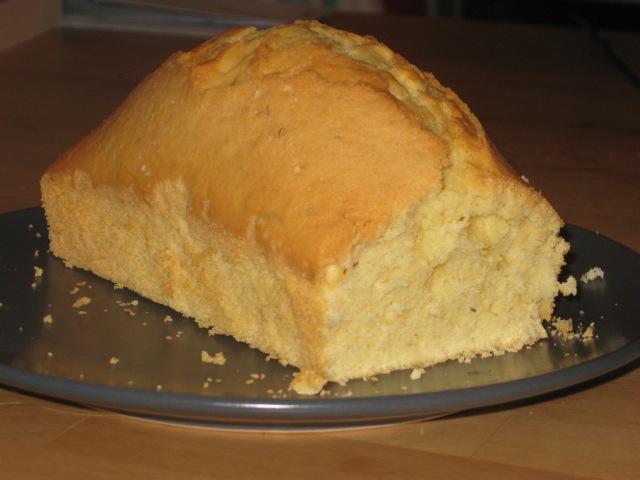 Sometimes I fear that I’m not adventurous enough with my cakes.  The classics are so good, I’d rather stick with them than risk the bitter disappointment of being unsatisfied by a new variety.  But life is too short:  it’s time to be bold with both my eating and cooking.  My initial reaction on seeing Simon Rimmer’s recipe for rosemary and olive oil cake was one of confusion and fear.  But I have great faith in Mr Rimmer, and am yet to try one of his recipes that I don’t rave about afterwards.  And I do love rosemary.  So, why not try it in cake form?

While I was mixing this cake (in a pan, rather shamefully, because the only bowls I have were already in action elsewhere), I feared I had made a mistake, and when I licked the spoon afterwards I was concerned at how oily it was.  More worryingly, Simon does not specify in his book how much rosemary to use (this used to be my nightmare in recipes, as I always preferred exact measurements with no margin for error, but as my instincts have improved I don’t mind so much – but still, when it comes to herbs in cake, I’d like a little more guidance!), so I had to guess in order to strike the right balance.  While it was cooking, I kept peering in anxiously, sniffing the air tentatively.  I could definitely smell the rosemary, but there was the usual cakey aroma too, so my spirits began to rise.  So too did the cake, rising up in the loaf pan, turning a nice golden colour, cracking a little on top – by the time it was finished, it looked and smelt amazing.  Still, it’s all about the taste, and I was still rather anxious as I sliced off a warm sliver of cake.  Would it be sweet enough?  Would oil ooze out?

I’m happy to say, it tastes sublime!  The sponge is really soft and delicate, not oily at all.  It has a gorgeous light taste.  The rosemary is flavoursome but not overpowering.  It’s a really light, refreshing cake, the kind that you’ve always got room for.  It’s quite summery too, which is just what you need – I had been clinging to my belief that on 1st September, the temperature would miraculously drop and autumn would arrive.  Alas, Hong Kong is as hot and sticky as ever…but now I’ve got cake to make it all better!  Yum!

This entry was posted in Vegetarian Recipes and tagged cake, rosemary, sweet, treat. Bookmark the permalink.