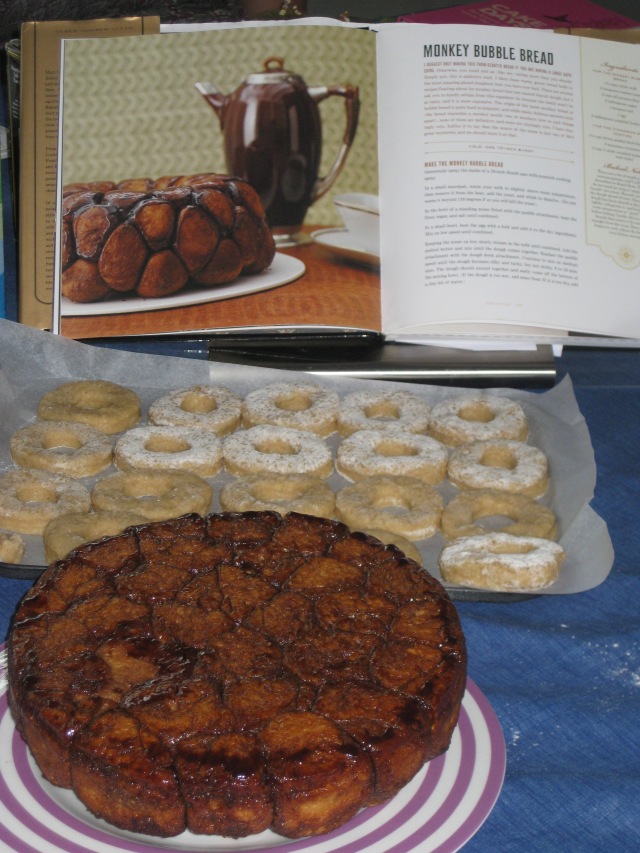 When I started this blog I intended it to be primarily for vegetarian meals, as the name suggests.  However, my sweet tooth seems to be leading me astray and it’s turning into something of a baking blog.  I’m going to try to rectify that situation, not only to get this blog back on track but also for the good of my health.  But one last hurrah:  on Sunday I went to a baking class and made some tasty little treats:  buttermilk doughnuts and monkey bubble bread, neither of which I’d made before.

The doughnuts were much easier to make than I’d expected, and were a lot of fun to stamp out and deep-fry.  They were served with a choice of 3 toppings:  cinnamon sugar, chocolate, or vanilla glaze.  My preference, as usual, was for the chocolate – the bitterness of the dark chocolate worked really well with the dough. 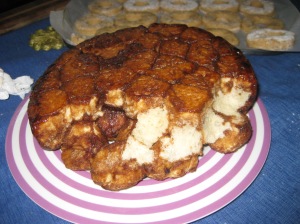 The monkey bread (also known as “monkey brains”, or so I’m told), was also fun to make.  It starts out as a basic dough, and after it’s risen you roll it into little balls, drop them in melted butter, roll then in cinnamon sugar and pile them into a tin.  Traditionally it’s made in a bundt cake tin (shaped like a ring), but we just used a standard circular cake tin.  When it’s cooked you have to flip it over like an upside down cake, so you end up with a nice sticky, syrupy bread.  It’s best eaten warm, by pulling apart the balls of bread.

Both of the recipes came from Baked Explorations, which definitely looks worth checking out.  However, I doubt I’ll find any of the aforementioned healthy, savoury, vegetarian dishes in there…