I have a brother.  He is a tyrant.  The picture below is all the proof that is needed:  I remain as sweet and lovely as I was on this my first Christmas (seriously, should an 8 month old baby be that big?!); he remains an evil monster bringing violence and aggression to the happiest of days (see how menacingly he points that weapon at the cameraman – mostly likely his own mother). 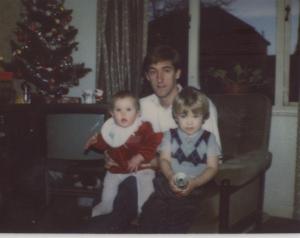 It has been 18 months since I last had the pleasure of his company, though I talk about him frequently in my classes.  Whenever I need an example sentence for a grammar point, I can rely on my brother for inspiration.  Comparatives:  “I am kinder and more intelligent than my brother”.  Second conditional:  “If I saw my brother now, I would kick him”.  Past perfect:  “I hit my brother because he had stolen my hat”.  I designed a whole grammar worksheet on third person singular forms based on comparing the two of us, from fairly innocent sentences like “I have long hair, but my brother has short hair” to the more pointed “I am clever but my brother is stupid”.  So despite being a tyrant, he does have his uses.  Or use, singular, at least. 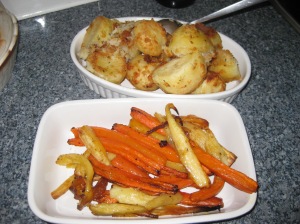 Lately we have been doing battle over the best plan for Christmas dinner, as we each want everything our own way.  Despite me threatening to stay in Hong Kong if he makes goose fat roast potatoes, I wouldn’t miss our reunion for the world and can’t wait to get back for some face-to-face squabbling.  I’ve spent three (non-consecutive, thankfully) Christmases without my brother, and it’s always better when we’re together, from our infancy exhausting our new toys together to nowadays exhausting our mother’s supply of booze.  Less than two weeks now till I get home, disrupt his reign of terror, and enjoy some fine food and drink in his company.  And while World War Three could break out over the roasties, we may eventually embrace the spirit of the day and be contented each with our own style.  My cheesy roast potatoes are obviously the best though.

(The pictures below are not the best, as I could only get red potatoes (which is bizarre in itself – they’re usually the hardest to find in Hong Kong) and made a mini version of the recipe.  Previous versions pictured above have been much more aesthetically pleasing, though the red ones tasted just as good.) 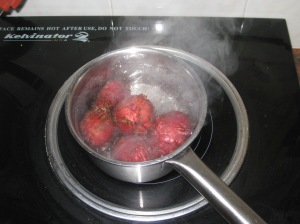 1.  Heat the oven to 220C.  Place the potatoes in a pan of salted water,  bring to the boil and simmer for 2 minutes.

2.  Drain well and toss in a little of the oil to coat.

3.  Stir the flour, cheese, herbs and nutmeg together in a dish with a small pinch of salt. 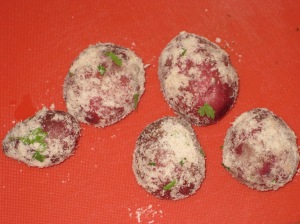 4.  Toss the potatoes in the mix, coating them well.

5.  Heat a good layer of the remaining oil in a shallow roasting tin in the oven. 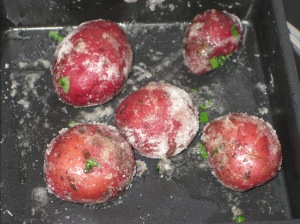 6.  Carefully add the potatoes to the oil, being careful of spattering.  Turn them so they are all coated in oil.

7.  Roast them for 40 minutes, turning the tray once.  Don’t move the potatoes, even though they will stick to the pan.  Serve them once they are golden brown and crisp.