Last Friday at school I returned to the classroom after break to find one of my Mexican students sitting ready to resume work, with a bottle of tabasco sauce sat on the desk before him.  “What’s this all about?”  I asked him.  “I carry it everywhere,” he replied.  Apparently British food is just a bit too bland for him so he keeps his trusty tabasco on hand.  If he buys a sandwich at Tesco or stops somewhere for a bowl of soup, he can season it himself with his condiment of choice. 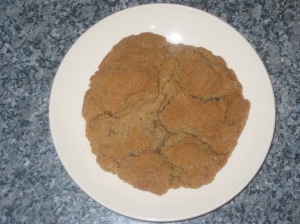 He was roundly mocked for this, of course, largely by me.  But thinking about it, I quite like the idea of carrying around a little something to jazz up my food.  Cinnamon is probably one of my all-time favourite flavours and scents, and I’d like to give it a little shake over my hot chocolate or the icing of a slice of cake when I’m on the go.  No extra cinnamon is needed for these cookies, however, they are flavoursome enough and sublimely chewy and delicious.  “Snickerdoodle” is just the American name for cinnamon biscuits, and it’s such fun to say it may be one of the rare occasions when the American word is better than the British.

1.  Preheat the oven to 180C and line a baking sheet with greaseproof paper.

2.  Combine the flour, baking powder, bicarb and half the cinnamon in a bowl. 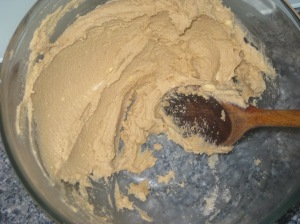 3.  Cream the marg, shortening, brown sugar, vanilla and 150g of the caster sugar in another large bowl. 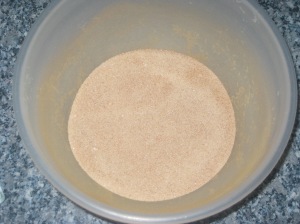 4.  Mix the remaining caster sugar with the rest of the cinnamon in a small bowl and set aside.

5.  In yet another bowl, whisk together the egg replacer and water until frothy. 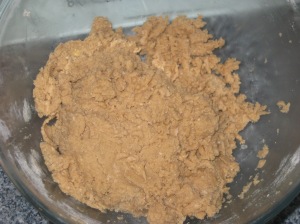 6.  Add the frothy mixture and flour to the creamed mixture.  Mix together – you may need to use your hands to bring it together.

7.  Roll the dough into large balls.  Drop them in the cinnamon sugar and roll them about to coat them.

8.  Place them on the prepared tray, leaving plenty of space to spread.

9.  Bake for 15 minutes.  Bang the tray sharply on the counter when you remove them from the oven – this keeps them nice and flat.

10.  Let the cookies stand on the tray for a couple of minutes, then carefully transfer to a wire rack to cool. 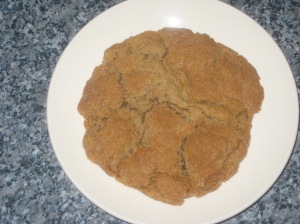