As the classic Brit who hates making a fuss or inconveniencing anyone, I sometimes feel a little embarrassed asking for vegan options in restaurants or cafes.  This can be exacerbated in places like Wagamama, where I’m given not one but two special dietary requirement ring-binder folders and feel like something of a freak.  I don’t know if it makes me feel better or worse when I see other vegans kicking up more of a fuss than me.

For instance, a few weeks ago I was ordering a vegan full English breakfast and was feeling like a nuisance for ordering my hot beverage with soy milk.  I needn’t have worried, however, as a vegan couple swiftly joined me at the bar and made my order look like the height of normality.  The conversation went something like this:

VEGAN COUPLE:  We’d like two small vegan breakfasts, please, but we’ve brought our own sausages.  [Hands over a box of Linda McCartney sausages]

WAITRESS:  …I don’t think we can do that.

WAITRESS:  Let me check with the chef.

CHEF:  I can cook these for you, but our sausages are already vegan.

VEGAN COUPLE:  Yes, but we don’t like your sausages.

ME [silently]:  Noooooooo!  You can’t say that!

WAITRESS:  We don’t do small, only one size.

VEGAN COUPLE:  Oh.  But we might not be hungry enough for that.

WAITRESS:  [with a clear sense of dread]  Any drinks?

VEGAN COUPLE:  Do you have non-dairy milk?

VEGAN COUPLE:  Can we see the carton?

It was horrendous.  On the one hand I felt relieved that my picky eating looked normal and problem-free in comparison.  But then I don’t want to be tainted by association with such loons.  Anywhere that caters so readily for vegans should be applauded, not have their sausages insulted to their very face!  Perhaps eating in is a safer bet, not least when there are dishes like these to be had.

Serves 4, from Appetite for Reduction

1.  Heat the oil in a large pan.  Saute the onion for about 5 minutes.  Add the garlic for a minute more. 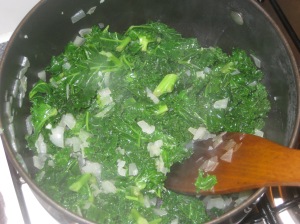 2.  Add the kale, water and salt.  Cover the pan with a lid and let the kale cook down for about 7 minutes, stirring occasionally.

3.  Tip in the beans, passata and stock and mix well.  Cover and simmer for another 5 minutes. 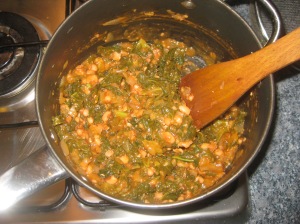 4.  Add the hot sauce and paprika.  Use a potato masher to roughly mash the beans.  Cook for 5 minutes more.  Season and serve.

This entry was posted in Vegan Recipes and tagged meatfree meals, vegan stew. Bookmark the permalink.