During the World Cup I am loath to support another country in any way, but let’s give the French some credit – they do make bloody good toast!  I had never made French toast in the past so it wasn’t something I could miss when I became vegan, but as soon as I saw this recipe I had to try it.  Isa Does It has quickly become my go-to breakfast book:  everything I’ve made from it has been absolutely sublime.

This provided a hearty yet summery breakfast on Saturday before I escaped from the Manchester gloom and went to explore nearby Chester.  It had been described to me as very similar to York, which can only be a good thing.  Sure enough, it had the same historic walls, the same cobbled streets (rather hard on summer shoes!), the same lovely, laidback atmosphere.  The only thing it was lacking really was the quirky, independent side that York has, with its little shops full of knick-knacks.  Still, this is the smallest of complaints:  walking the walls, picnicking in the sun and battling/playfighting to the death in the ancient Roman amphitheatre were all heavenly activities.  As great as the day was, breakfast was probably the highlight.  So good, I had to have the same again the next day.

Makes 6 slices, from Isa Does It

banana and maple syrup, to serve

2.  In a large, wide bowl whisk together the flour, salt, cornflour and milk until there are no lumps.  Add the vanilla.

3.  Spread the coconut over a plate. 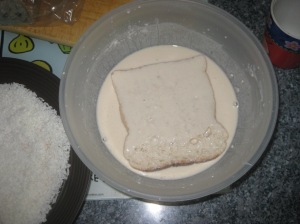 4.  Melt a tablespoon of coconut oil in the pan.  Dip the first slice of bread in the batter first on one side, then the other.  Let the excess drip off. 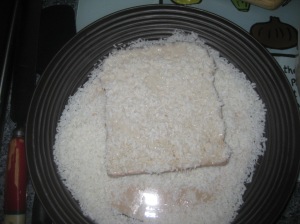 5.  Press one side into the dessicated coconut, then the other. 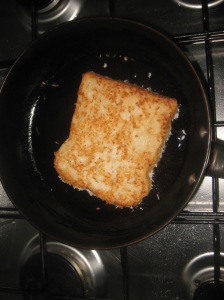 6.  Carefully put the bread in the frying pan and cook it for about 3 minutes on each side.  Flip it carefully with a spatula or palette knife. 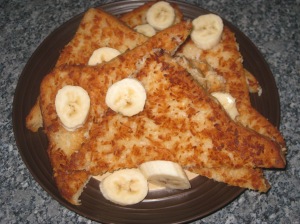 8.  Add another spoon of coconut oil and repeat the process with the other slices of bread.  Before serving, you might want to reheat the slices in the oven for a few minutes.  Serve with sliced banana and a generous drizzling of maple syrup.