I was considering how dishes like falafel and kebabs might fit into my cuisine-fest, because I feared there might be some contention over where they originated. But it seems like doner definitely comes from Turkey, and this fast food, all-vegan place in Nuremberg pitches itself as a Turkish restaurant, so that’s good enough for me! 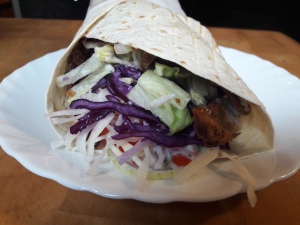 Vegoner serves a few different dishes, including a goulash and a stew of the day, but we only had eyes for the doner. It’s a gigantic serving of mock meat, salad, and a choice of yoghurt or “cocktail” sauce. We were a little daunted by the latter, so we stuck with yoghurt. I have no complaints about the portion size (it was insane!) nor the texture of the meat, which was just wonderful – but I found it very bland. It didn’t seem to be seasoned at all, so maybe we should have gambled on that cocktail sauce to bring the flavour. 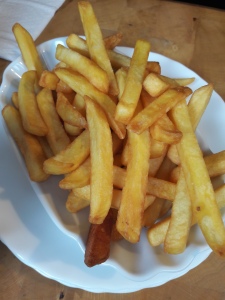 I’m not sure how Turkish chips are, but what the heck, they just go with everything! They were fried to absolute perfection, and I could have eaten a million of them…if only I’d had room! Dr HH and I ordered a portion each, and I would urge you not to repeat our mistake unless you’ve worked up quite the appetite – we left about half of them because we were just so stuffed. We didn’t even have room for the baklava, which is always a sure sign that we’ve been fed too much!