Greens is something of a Manchester institution:  a fairly fancy vegetarian restaurant in a fairly fancy part of town (Didsbury).  I have long been a fan of Simon Rimmer, the omnivore who bought the restaurant, learned to cook and kept it all vegetarian.  For any special occasion since my family moved to Manchester, Greens has been the immediate and obvious choice.

I fully expected to love it as much once I became vegan, but truthfully I can’t say that’s the case.  While there are at least three vegan options for starters and mains, none of them are marked on the menu which means dragging over the waiter to check – not a massive inconvenience to anyone, I suppose, but I try to keep my veganism as unobtrusive as possible.  Similarly the wine list isn’t marked either, and I constantly find this the biggest problem in being vegan.

That’s not to say I’ve completely lost faith with Greens:  the food is still good.  When I was there most recently, my boyfriend and I found the food tasty but not particularly overwhelming.  We kicked off with the taster plate of black pudding (the mayo is not vegan, that was just for my fellow), which was beautifully crisp from deep-frying, but besides that not too different from the kind we buy in the local veggie shops and occasionally add to a breakfast fry-up at home.

The last two times I’ve been I’ve chosen the same starter and main, and I’m genuinely not sure if that’s because they were so good or just because I wasn’t massively tempted by the other options (and also my belief that where possible I should avoid ordering the same food as my companion).  This scorched broccoli is like a plate of health – I don’t care if it’s doused in oil, I always feel extremely virtuous when I eat it – and the dressing is full of Asian flavours:  ginger, soy sauce, lime and garlic, with hazelnuts thrown in for a bit of crunch.  Occasionally I feel like scorched is too fancy a euphemism for burned, but the richness of the flavours win me over. 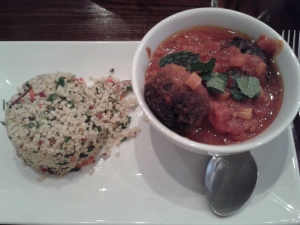 And for my main I’ve had these sublime aubergine koftas twice.  The tabbouleh (capsized by the waiter, not by me, I hasten to point out) I can take or leave, but the koftas are like meatballs in a rich tomato sauce.  They inspire in me that classic dilemma of wanting my beau to share in the joy, but not wanting to lose out on any of the deliciousness myself.  In scenes of unprecedented generosity, I allowed him not one but two spoonfuls.

Dessert is where Greens falls down for me.  None of the regular menu items are vegan- you actually have to ask and they provide one option only.  This makes it seem like vegans aren’t exactly welcomed, and that wowing the vegan guests is not a priority.  And to be honest, the desserts I’ve had really don’t deserve a place on the regular menu.  Greens isn’t exactly fine dining, but it does aim to be classy and impressive, and the vegan dessert never meets the normal standard.  The first vegan pud I had was this crumble.  The presentation isn’t much to shout about, and it was just a pretty basic crumble.  On my last visit it had changed to a carrot cake – just a slice of cake with no icing.  Come on – we may be vegans but we still want treats!  This time it was back to crumble, though as the picture at the top of the page shows, at least the presentation has improved.

Bistro 1847 in the city centre is still the new kid on the block when it comes to higher end vegan dining in Manchester, and I feel like it may have surpassed Greens.  I just need to convince my fellow to take me for another fancy meal so I can begin a more complete assessment!  They do at least take much more pride in their vegan desserts and mark all their vegan options – small things which make you feel a bit more at home and a bit less of a nuisance.

This entry was posted in Travel and tagged Greens, vegan Manchester. Bookmark the permalink.