Vegan in Edinburgh: Part One 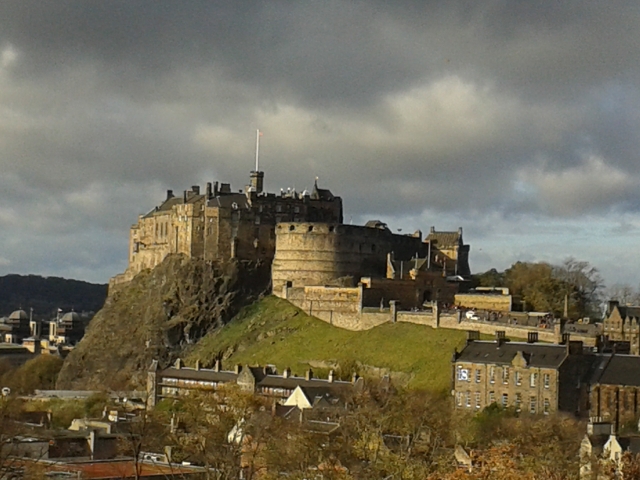 After spending three years studying in Edinburgh, I’m always looking for an excuse to head back up there for a visit.  Last weekend my fellow and I managed to get a bit of time off together (no mean feat) and ran away to bonny Scotland to relax for a few days.  As luck would have it, we arrived in Edinburgh just in time for the monthly vegan night at the Bread Street Brasserie.  It’s in quite a swanky hotel, so when we rolled in fresh from a three hour train journey I was worried we’d be looked down on.  Far from it:  there was a very mixed crowd and the staff were uniformly delightful!  In keeping with vegan nights here in Manchester I’d been expecting a set menu, so having three choices per course was quite the delicious dilemma. 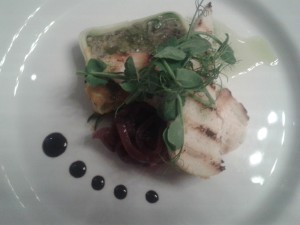 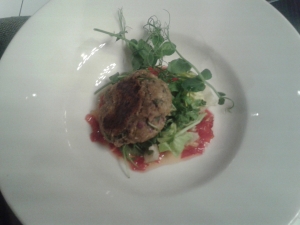 For our starters, I chose the vegetable terrine which came with a couple of toast triangles and was really tasty, while my fellow had the falafel, as is his wont.  We are blessed with the greatest falafel known to man here in Manchester (Go Falafel – I can see it from my classroom window and quite often just gaze out, drooling), and had already had some for our train picnic that afternoon, so alas, this was doomed to fall a little flat in comparison, but was tasty nonetheless.

We both chose the same main, this mushroom strudel with baba ganoush and couscous.  The strudel was gorgeous; really meaty with the succulent mushrooms, but the couscous: sauce ratio was somewhat skewed on the dry side. 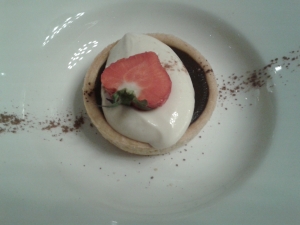 Dessert was the highlight, as is so often the case.  We decided to split two desserts due to our indecision.  The passionfruit cheesecake was a little bland and needed more flavour in the tofu, but the chocolate tart was simply sublime – the chocolate was rich without being oppressively heavy, topped with beautiful non-dairy chantilly cream, encased in perfectly cooked pastry.  I could have eaten at least another two!

I have a lot of respect for places that run a vegan night, such as The Salford Arms here in the north west which does them on a weekly basis.  Even if they don’t quite hit the high notes, the positives always outweigh the negatives and I’m so pleased that people are catering to the plant-based diet and really showing off what can be done without animal products. 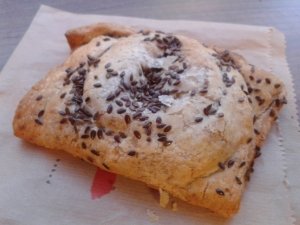 The next day we ate our main meal in Glasgow, and only had time for a hasty pie before going to Murrayfield for a spot of rugby (the less said about that, the better).  Fortunately it was not only a hasty pie, but a tasty one too, though truthfully mine was more of a pasty – the Moroccan vegetable offering from Piemaker.  There are a couple of vegan savoury options and three sweet ones, all clearly marked.  I don’t get many freshly baked pasties on the go these days, so this was a nice treat.

On Saturday we had lunch at The Engine Shed, a nice little cafe at the foot of Arthur’s Seat which is staffed by young people with learning difficulties.  It sounds like a noble cause, but unfortunately it isn’t receiving enough funding and is closing down in March next year.  The food is all vegetarian and I had expected some solid vegan options, but was disappointed to find the only hot dish for vegans was the soup – a somewhat uninspiring vegetable and stock affair.  Still, it filled me up and I feel I was just unlucky to go on a day with no vegan option.  My companions told me that the cheesy lasagne was good, so there is every reason to have faith in their cooking.

At least they had vegan cake options though.  I went for chocolate, of course, while my fellow got the date and walnut cake which was surprisingly moist and delicious.  I would recommend this place to vegans more for the cake than the mains, as the latter might be a bit of a gamble.  After a walk up Arthur’s Seat, what greater reward could there be than a slab of cake and a hot drink?