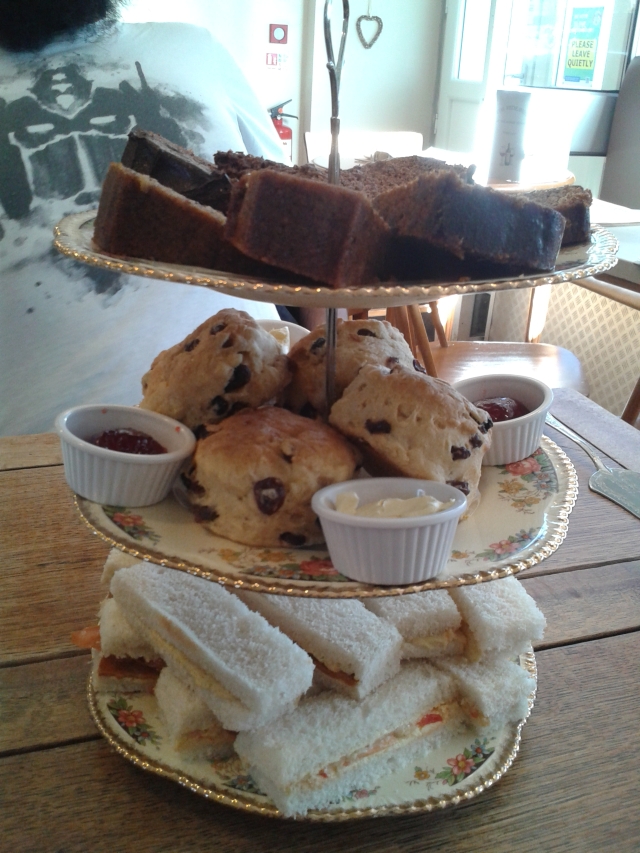 I’ve decided to make 2015 the year of the vegan afternoon tea.  I want to have one per month, and I kicked things off with a trip to The Hideaway in Urmston, Manchester.  It’s an omni-cafe which does a regular afternoon tea, but with a bit of notice they are happy to veganise it for you.  It’s a bright and airy little place with really friendly staff, and as a bonus they were playing endless 90s R’n’B that I’d forgotten all about:  an afternoon tea accompanied by Eternal and Brandi can only be a good thing.  It was an excellent spread of food for £12.95 each.  It’s not often I feel so full I almost turn down cake – it was a sign of how tempting the ginger cake was that I ploughed on to the end!

Starting with the sandwiches, I was very pleased with the array.  Last time I went for vegan afternoon tea in London we only had cucumber sandwiches – this time they were accompanied by hummus with pepper and tomato with salami.  Vegan salami is one of my greatest hates, so I was a touch apprehensive about it.  And yet, I loved it!  The tomato added a necessary light juiciness to it, and it was really a winning combination.  I rated it as the best sandwich of the bunch.  Hummus and pepper is a real classic, though we found them a little light on the pepper.  Cucumber sandwiches are fine, but a bit unremarkable.  All in all, a solid sandwich plate, though I’d have liked a bit of brown bread rather than all white.

No complaints whatsoever about the scone plate.  Two weighty scones each, with your own little pot of spread and jam so you don’t have to scowl bitterly if your companion takes more than their share.  I always struggle to make good vegan scones, so I was very envious of these beautifully baked ones, and I think I’d go so far as to call them the highlight of the event.

A generous cake plate is the essence of an afternoon tea, and this one was extremely well-stocked:  two slender slices each of lemon and poppyseed, chocolate and date and sticky ginger cake.  We were tipped off by the friendly waitress that the ginger was the best, so we saved that till last.  The lemon and poppyseed cake was quite disappointing, unfortunately:  quite powdery and dry, though it had that fresh zingy taste.  The chocolate cake was better, with delicious thick icing.  But it truly was the ginger that was best, all sticky and full of flavour.  We could barely move at the end of it all, but were extremely happy with our full bellies!

Besides one sub-standard cake and a bit of skimping on the sandwich filling, we loved this afternoon tea and were mightily impressed with The Hideaway.  A strong showing for our first afternoon tea in Manchester!  At the end of March we’re having afternoon tea in Brighton.  Will it surpass this one?!

This entry was posted in Afternoon tea, Travel and tagged The Hideaway Urmston vegan, vegan afternoon tea, vegan in Manchester. Bookmark the permalink.