The Asian Vegan Kitchen had been sitting on my bookshelf for several years, and only used twice.  That’s pretty poor, especially considering how much I love Asian food.  I’d always been deterred by the fact that the ingredients lists look so daunting, and there aren’t many pictures.  Choosing this as a cookbook of the month forced me to actually venture into some of the tempting recipes, and I was not disappointed.  As I already have a pretty good stock-pile of ingredients now, it turned out to be a fairly cheap and tasty month, though due to my holiday I didn’t have time to cook as many recipes as I would have liked.  The book is organised by country, and I seemed to stick to a few of them. 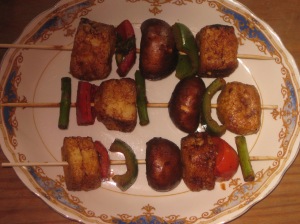 Starting with the Thai section, I made these satay skewers with their delicious chunks of deep-fried tofu, mushrooms, peppers and asparagus.  The recipe also called for chunks of baby corn, but I couldn’t get them onto the skewers – fortunately, they were delicious eaten straight from the marinade.  The marinade was tasty, but was  overpowered by the sweet peanut dipping sauce that is served alongside it – I think you really only need one or the other.  We also debated whether we’d put theses ingredients on skewers again.  It would be much easier to simply serve them with some rice and a dollop of sweet peanut sauce.  We’ll definitely be having it again in one form or another though. 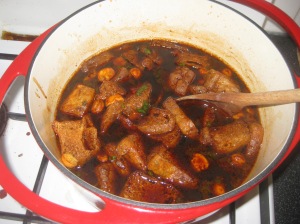 The tom yam soup was nicely flavoured, but looks a bit unappetising due to the dark soy sauce I was using.  I’m now rather fed up with thin Asian broths – I’ll definitely be back to some chunky, thick soups in May! 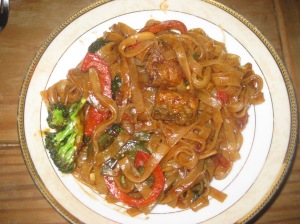 The amusingly titled drunkard’s noodles are so named because the author believes they are a good hangover cure.  I can’t confirm that, but I had them when I was full of cold post-holiday and they certainly cleared my sinuses!  They were good and spicy, and delicious hot or cold. 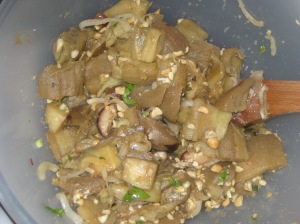 This roasted aubergine salad was a filling and spicy lunch – again, good for my sinuses.  It’s better fresh from the oven, but cold leftovers work too.  I loved the crunchy peanuts! 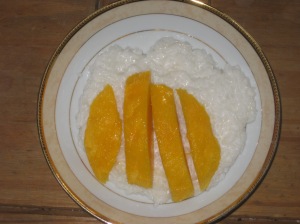 Unsurprisingly, desserts aren’t the main focus of this book.  The only one I made was the sticky coconut rice with mango, that Thai staple.  It was as good as I’d hoped, and I’ll definitely make it again!  The recipe calls for quite a lot of sugar, which I thought would be unnecessary in light of the coconut milk and cream.  However, I would recommend using the full amount as a mouthful without any mango was really lacking in sweetness. 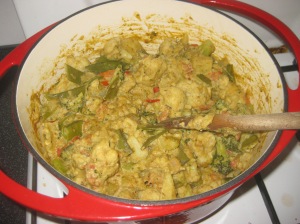 I’d expected to use the Indian section a lot more, but it only got a couple of outings.  The navratna korma is actually one of the dishes I’d made before.  This time I tweaked the recipe, soaking a cup of cashews beforehand to provide a real creamy sauce for the curry.  Actually though it wasn’t particularly creamy, and turned out to be one of my least favourites.

The mushroom and green pea curry from the Indian section was one of the more intriguing dishes I tried- it was unlike any curry recipe I’d used before.  It called for a sauce made from ground up blanched almonds, which I decided to replace with almond butter, which resulted in quite a thick and creamy sauce.  The poppy seeds were a pleasant but unusual addition.  All in all, it was a nice tasty curry. 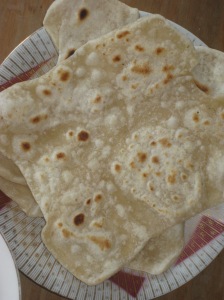 And I even made my own bread to serve with it!  I’m a famously bad breadmaker, so this lachedar paratha was quite the surprise – it did exactly what I wanted (except that it was meant to be round and came out rectangular).  Mr HH is an expert in Indian flatbreads, and even he seemed tolerably impressed with my efforts, so I’m calling this one a definite win. 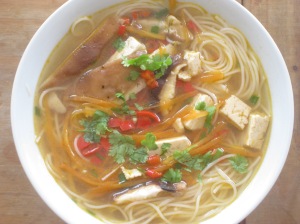 Although I lived in Vietnam for two and a half years, I rarely cook Vietnamese food.  I only remember eating pho once when I lived there (I know.  My only defence is that I hadn’t even heard of Happy Cow back then and didn’t really know how to find meat free food.), and that was when a student took me out and failed to grasp the concept of vegetarianism – she ordered me the soup without the meat, but it was still meat broth and I could barely choke down a few polite mouthfuls.  This was much better!  There were lovely tofu and shiitake strips, some fiery red chillies, crunchy beansprouts and of course plenty of noodles which I slurped up like a true Vietnamese. 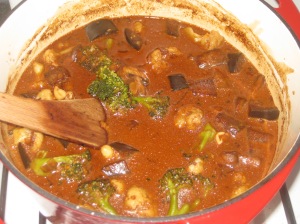 The spicy coconut vegetable soup from the Vietnamese section doesn’t look too appetising, thanks again to the strong colouring from the dark soy sauce I used.  But it’s all about taste, and that was spot on – it didn’t lie about the “spicy” part. 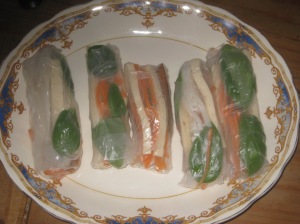 Spring rolls were probably my favourite Vietnamese food, and while I’d usually go for the crispy, deep-fried variety, this time I made some healthy fresh ones.  They were simple and tasty and I’ll definitely make them again – they made for a nice light meal and were nice simply dipped in soy sauce.  As always, the presentation needs improving, but the taste was an immediate hit. 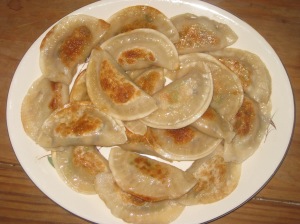 China was quite under-represented in my endeavours, and the only dish I tried was this one.  I was extremely nervous and excited about making gyoza for the first time – and astonished at how easy they were!  The filling was really simple but tasty, and construction was easy.  We popped a few in the freezer as well, so we have some more to look forward to. 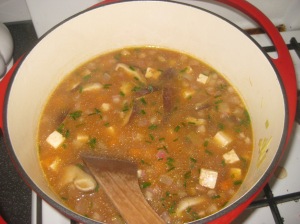 The Japanese section was one of my favourites:  I’m crazy about Japanese food at the moment.  The tofu and vegetable soup was simple, but really tasty.  It included burdock, a mysterious ingredient that I’d planned to simply omit until I spotted some in the Chinese supermarket and thought I’d give it a go.  I suppose I’d expected it to taste like dandelion and burdock, but in actual fact it didn’t seem to lend a particularly distinct flavour to the soup.  Still, it was an exciting purchase, and the soup was really nice- the best of the ones I made. 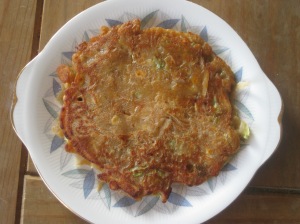 I was a little anxious about making this vegetable pancake because I don’t usually excel at flipping pancakes.  But this one turned out pretty nicely, as you can see.  The recipe said it would serve four, but (gluttony alert) the pancake above consists of half the batter.  That looks the perfect size for a main course, in my opinion, so I don’t feel too guilty about it.  It was nice and crispy, and really delicious with the tomato-based sauce from the recipe.  I made it again with asaparagus rather than shiitake mushrooms, and it was just as good – they added a nice bit of bite to it. 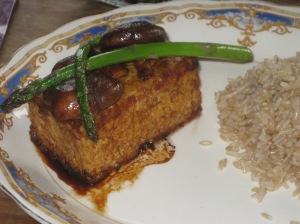 The tofu teriyaki steak was one of the dishes I was most excited about trying.  I simplified the recipe somewhat, frying the mushrooms and asparagus in the same pan as the steak to save on washing up.  I know a lot of people complain about tofu being bland (that’s the point, it’s a flavour sponge!), but this had some good flavour from the sauce.  I might marinate it in the sauce next time to really let it soak it all up. 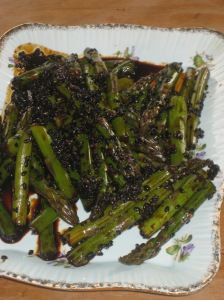 I served the steak with black sesame asparagus – I didn’t grind the seeds as recommended, and I really liked the texture as it was.  The taste was good too, and it accompanied the steak nicely.

I felt like I hadn’t done that well with my challenge this month, but looking back I think sixteen recipes is pretty good in a month with a long holiday.  And the challenge worked for me in the sense that I finally overcame my fear of this book and no longer feel so daunted by it – it’s one that I’ll happily dip in and out of again in the future.  Despite the lack of pictures, the recipes are easy to follow and are quite easily adaptable if you want to replace expensive/hard to source ingredients with those you can pick up easily at the supermarket.

Next month I’m turning my attention to Afro Vegan, a book I got for my birthday this month.  The recipes look quite involved, but hopefully I’ll have enough time to dedicate to them.

This entry was posted in Cookbooks and tagged Asian vegan food, Asian Vegan Kitchen, cookbook of the month. Bookmark the permalink.

11 Responses to Cookbook of the Month: Asian Vegan Kitchen