Cookbook of the Month: Afro Vegan 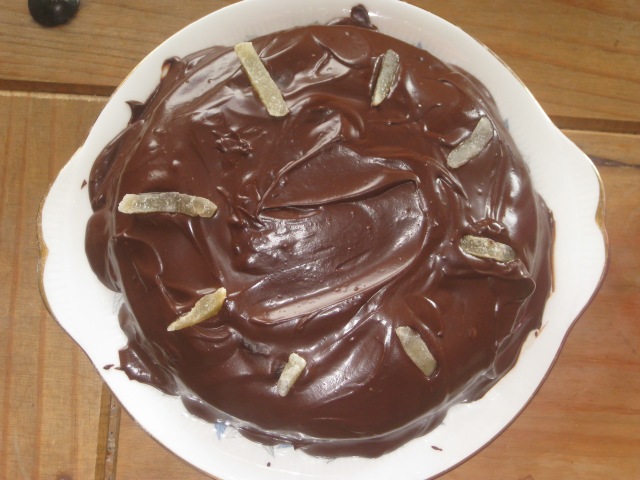 Afro Vegan is one of the prettiest cookbooks I own, full of beautiful pictures that truly tempt you to try the recipes.  I got it for my birthday at the beginning of April and struggled to wait until the end of the month to dive into it (I take my cookbook challenges seriously).  Each recipe is accompanied by a suggested song and sometimes even a suggested read, and I think that tells you something about the book – it’s not intended as an after work, throwing something together kind of affair.  These are dishes that take some time and preparation (though they’re not necessarily hard work).  For that reason, I found it difficult to use this book for my normal midweek meals, and didn’t use it quite as much as I’d originally hoped.  But I didn’t do too shabbily, as you will see. 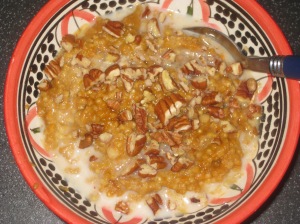 Starting with my favourite meal of the day, I made this millet and sweet potato porridge for a weekend breakfast.  Porridge is my normal breakfast, and I like an excuse to make it a bit fancier.  This was quite labour intensive – I roasted the sweet potato the night before, but was up with the lark to toast and simmer the millet, let it stand, mix everything together…in the end, it was nice.  But worth the extra effort in the morning?  I wouldn’t say so. 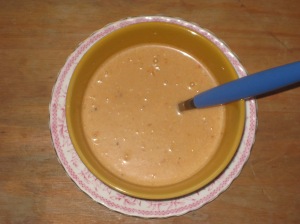 Soup is my go-to packed lunch, so I made a few from the book.  This creamy coconut-cashew soup was creamy from the cashews, and its depth of flavour belied the simplicity of the ingredients:  coconut milk and sweetcorn.  The recipe called for fresh corn from the cob, but I chucked in some frozen stuff for ease.  It was intended to be garnished with grilled okra, but as I take it to work in a flask I didn’t bother with the extra touches.  It would have added a nice bit of colour though, there’s no denying that. 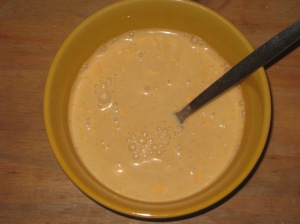 The sweetcorn and ginger soup was quite similar, except that it included ginger and carrot, and the sweetcorn was added post-blending.  It tasted and looked similar to the first soup, but that was no bad thing in my opinion. 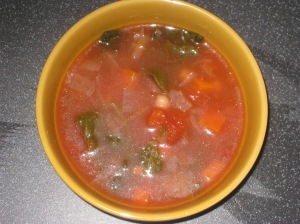 I made the hominy and spinach in tomato-garlic broth with a few changes:  first of all, hominy is a bit of an unknown in the UK, so I chucked in a tin of chickpeas instead.  Secondly, the recipe called for the soup to be strained but I thought that would be a waste of the carrot, onion and tomato, so I kept mine full of veg.  Both were wise choices, I think – it was nice and substantial.  The broth was still very tasty as well, full of garlic. 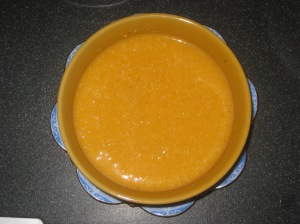 The sweet potato and pumpkin soup was merely spiced with cinnamon, which gave me cause for concern.  Sure enough, it tasted sweet, but lacked that bit of spice which would have rounded it out.  It was pleasant, but unremarkable. 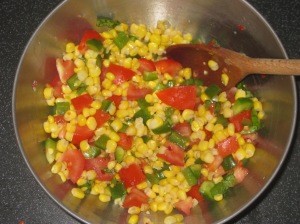 Moving away from soups to the other lighter bites…sweetcorn features pretty heavily in the book, and again I went for the frozen form for this fresh corn salad.  It’s simple (sweetcorn, green pepper, tomatoes, olive oil, basil, chilli flakes), but again, so tasty.  And so pretty!  Colourful food is always the best. 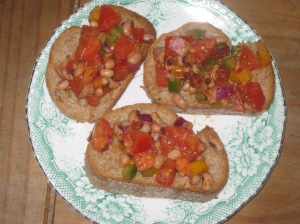 One weekend we tried the Texas caviar on grilled rustic bread, which we called bruschetta.  The topping was delicious – really fresh and easy to make, full of zingy flavours, and very nice on top of toasted bread.  I’ll definitely make this again, for a light lunch or as party nibbles. 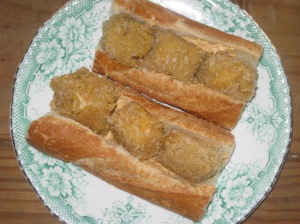 The lil’ tofu po boys were a bit time-consuming and washing-up-producing, but I think they might be worth the effort:  marinated tofu, coated in panko breadcrumbs and deep-fried.  Delicious!  The recipe called for a creamy red pepper spread as well, but I lazily swapped this for a dollop of red pepper and jalapeno hummus, which added a nice bit of flavour to the sandwich.  I’ll definitely make this again. 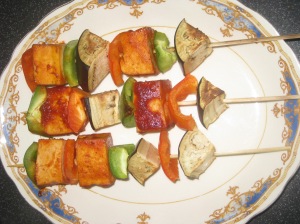 The summer vegetable and tofu kebabs with pomegranate-peach barbecue sauce were also a hit.  There should have been baby new potatoes on the skewers as well, but I completely forgot to thread them on, so we had them on the side, dunked into the sauce.  The sauce was the highlight, a pleasant mixture of spicy and sweet.  I simplified the recipe a bit by using tinned peach slices, rather than peeling and chopping them myself.  The tofu was soaked in the sauce beforehand and had absorbed the flavour beautifully, and there was enough sauce to serve with the kebabs as well.  I’ll definitely make this again in the summer. 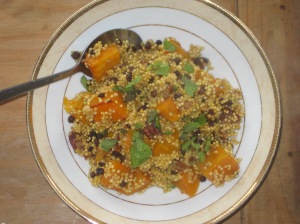 For the couscous with buttnernut squash, pecans and currants I used millet rather than couscous, as I had an abundance of it.  The dish was quite sweet, with dates, pecans, squash, currants and cinnamon.  I liked it, and it was fine cold for leftovers the next day, but I don’t think it’s the best butternut squash salad recipe I’ve encountered. 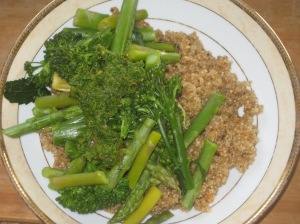 Ready for some mains?  The verdant vegetable couscous with spicy mustard greens was a nice meal.  I used quinoa as my grain, because that was all we had in, and toasting it first was such a great twist that I’m always going to do that now.  The asparagus and broccoli were fresh and tasty.  I have no idea what mustard greens are, so I used kale for that part of the recipe, steaming it then blending it with the garlic and spices.  It was very spicy, and I only needed a small dollop of it to season the dish and provide sufficient kick for me.  For such a simple dish, it did require a lot of separate pans and generate quite the mountain of washing up, so I’m not sure how likely it is to reappear in my plans. 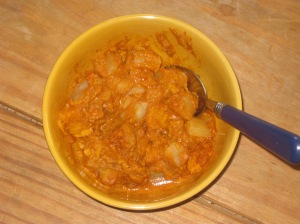 The peanut stew with winter vegetables was sensational!  The recipe calls for dumplings as well, but I didn’t make those – instead, I served it with either crisps or bread.  Again, there was incredible depth of flavour:  nuttiness, heat, sweetness from the veg (parsnips and sweet potatoes).  Really beautiful. 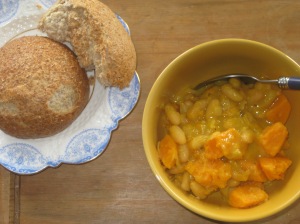 And the sweet potato and lima bean tagine was good too, though not really spectacular – it was a solid evening meal.  I have never found lima beans in the UK, so I used cannellini instead, and found them very enjoyable.  Overall it was tasty with quinoa or crusty bread, and had a pleasant sweetness to it, but I’d probably ratchet up the spices next time. 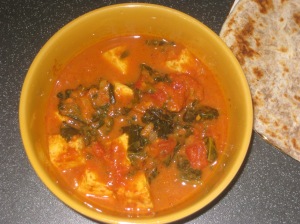 The tofu curry with greens was delicious!  I doubled the amount of tomatoes and used kale for my greens, instead of the elusive mustard greens.  There’s a generous tablespoon of peanut butter in the mix, giving it more of an African than Indian flavour.  But of course, the baked tofu was the real winner.  I could have eaten much more! 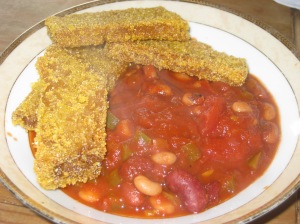 The black bean and seitan stew had me worried for a while, as the only spice that went into it was allspice and the recipe didn’t sound very substantial.  I beefed it up with two tins of plum tomatoes, and doubled the amount of beans (alas, the foreign foods aisle had run out of black beans so I made do with a mixture of kidney and black eyed).  I seasoned it like crazy and it turned out very nicely – but the seitan was the real star of the show!  Coated in polenta and shallow-fried, it was delicious and crispy and added some much-needed bite to the dish.  Delicious! 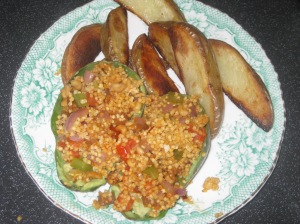 The millet-and-peanut-stuffed avocado was fantastic!  The recipe includes a harissa salsa which I omitted – I added chilli flakes to the filling, so we didn’t need any extra spice.  The millet mixture was very tasty, with a lingering hint of coconut from the oil, crunchy peanuts, fresh vegetables and a healthy dose of tamari.  It was even better when combined with the cool, refreshing avocado meat.  It was easy to make, and very, very good. 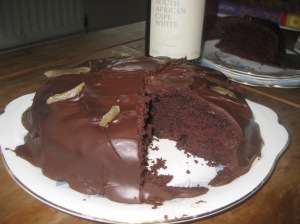 And finally, I made the cocoa spice cake with crystallised ginger and coconut-chocolate ganache as a treat for finishing a 10km race.  It was a worthy reward!  I followed the recipe exactly, and even my oven (which has a special tendency to simultaneously burn the bottom of a cake and undercook the rest) played nicely and baked it perfectly.  The sponge was really moist and beautifully flavoured with chunks of crystallised ginger and a pinch of cayenne pepper – just the right amount of chilli for me, a nice warm kick in the back of the throat.  The ganache was surprisingly successful too – I was worried that it wasn’t thick enough before pouring it over the cake, but it set really nicely and was soft and chocolatey.  The whole thing was easy to make, and my mum immediately asked for the recipe after trying a slice, so we’ll call this a definite winner!

I’m glad to have this book on my shelf, and I think I’ll definitely wheel out a few of the recipes again.  But overall, I’m not sure I have the time to really get the most out of this book.  I suppose the cake recipe alone makes it a worthwhile purchase though!

This entry was posted in Cookbooks and tagged Afro Vegan, cookbook of the month, vegan cookbook. Bookmark the permalink.

7 Responses to Cookbook of the Month: Afro Vegan