Sometimes it can be a little lonely being a vegan:  being the only one who has to turn down a slice of birthday cake, waiting a little longer in a restaurant for a meal and receiving a little less, standing still in the supermarket analysing the packaging while everyone else whizzes in and out.  So it’s no surprise that there is a thriving vegan community online, consisting of Meetups, countless Facebook groups, bloggers galore, the Post Punk Kitchen community and the excellent Vegan Package Swap.  Besides the occasional ‘who’s the better vegan?’ contest (it’s all about parent companies, sugar and palm oil, basically), it’s a wonderfully welcoming community and a great resource.  Courtesy of the Manchester Vegan Facebook group, I found out about a pop-up event at Nooch in Wigan last month.  A vegan chef called Matthew Nutter was offering seven courses of fine dining for the reasonable price of £30, so we eagerly signed up and headed off to Wigan for the evening. 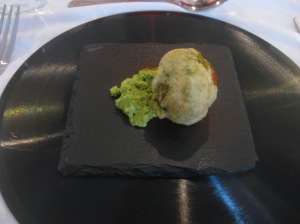 The amuse bouche was one of the highlights of the evening (admittedly, this is largely because anything deep-fried gets bonus points in my book).  It was a battered broad bean fritter served with a basil puree and seasoned with paprika.  Despite the filling reminding me a little of the abomination that is the mushy pea, it was really nice and a promising start to the evening. 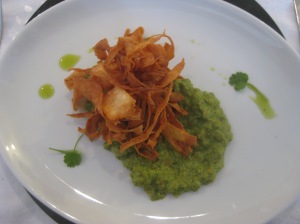 There was a choice of starters:  Waldorf salad, or chips and curry sauce.  Despite the Fawlty Towers hilarity, I could not force myself to choose a salad, so it just had to be the chips and curry sauce.  It didn’t look like your usual chip-shop fare, of course:  delightful parsnips crisps with a really delicious saag almond sauce.  I thought this dish was exciting and creative, I really loved it.

The soup was a beetroot and apple gazpacho (we nobly resisted all Red Dwarf-inspired tendencies to ask for it to be heated up).  It was a teeny tiny portion, but it was all we really needed.  I thought it had quite a lot of flavour, and the apple made it a little sweet and refreshing, but my fellow was rather underwhelmed by it and didn’t feel it added much to the meal.

Next up was a salad, but it was a good one:  more beetroot, this time with orange and watercress, and some couscous under there too.  I’ve seen quite a lot of salad recipes that call for slices of orange, and I just shudder in disgust and turn the page.  This salad has changed my mind:  it was really good!  I don’t often enjoy mixing sweet and savoury, but the orange wasn’t overwhelmingly sweet in this case, and it certainly looks appealingly vibrant.  I’m definitely going to try those orange recipes now.

For the main course we once again had a choice, and we both chose the salt and pepper aubergine steak.  The sticky rice with pineapple was amazing (despite what I just said about sweet and savoury, the pineapple was right at home here), and the cashews around the edge added a nice crunch.  The 5 spice aubergine steaks were rather slender, I felt – there wasn’t much meat on those baby aubergines.  I know portions have to be small when you’re pacing yourself through seven courses, but they had shrivelled quite a bit while cooking so there wasn’t that much to get into.  The salt and pepper salad had a bit too much chilli for me, but was nice addition nevertheless.

Pre-dessert was next, another little teacup, this time full of a lemon, apple and chia drink.  It had a nice gingery kick and was a nice transition to the dessert.

There were two options for dessert, and we went for the chocolate mousse with strawberries.  Although the menu listed avocado as the ingredient for the mousse, I wonder if they switched it completely for banana because that was the predominant flavour.  It was a nice mousse, really light, and the toasted coconut around the plate added a lovely bit of texture and a nice exotic flavour.  Delicious!  I know fine dining dictates that nothing can be served in a simple, straightforward manner, but I think this mousse would have been better in a bowl.

All in all, it was a very exciting evening and we enjoyed all the different dishes we got.  This week we’re going back for more:  only five courses this time, but I’m sure that will suffice.  As I always say, I appreciate any establishment that is trying to do something new and impressive with vegan food, and I hope that this chef will set up a permanent home in the north-west.  My experience with the vegan community here suggests there would be plenty of customers.