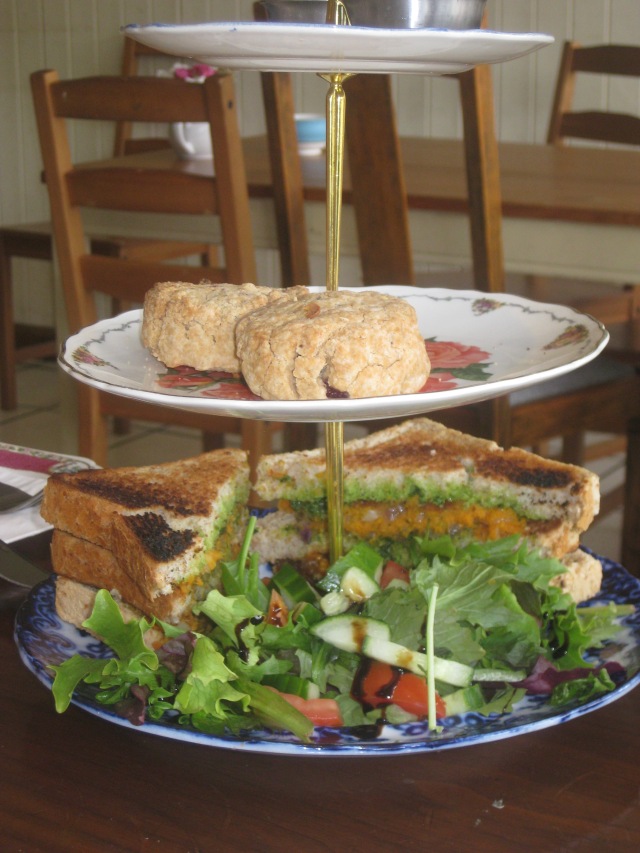 A half-empty cake stand isn’t the most inspiring start, is it?  Afternoon tea at the Crosby Tea Rooms in Liverpool was quite a mixed bag:  the food was really good, but as a whole it didn’t quite come together.  Part of the afternoon tea experience is the wow factor when a cake stand of treats is set before you on the table.  Don’t worry, there was cake this time – it just arrived later, after we’d finished this part of the feast.

Luxury afternoon tea at the Crosby Tea Rooms involves a choice of a sandwich from the menu:  there are two vegan fillings, or a club sandwich combining both of them between thick slices of toasted bread.  Obviously that’s the one we all chose, which may have been an error.  The sandwich was delicious (though it could have done with something to counteract the sweetness of the sweet potato, of which there was a lot), and the accompanying salad and vegan coleslaw were good too.  But we had a full club sandwich each, two of the halves shown above, and that is a lot of food when you consider it has to be followed by a scone and two full size slices of cake.  There’s a reason afternoon tea usually features finger food, after all.  Fortunately, we were asked if we’d like to take the leftovers home, so we duly accepted.

The scones had a mixed reception.  I absolutely loved mine and ate it without any jam because it was packed with raspberries and had a lovely coconut flavour.  My companions found it too dry, though they agreed about the great flavours.  I could have happily taken a load of these home with me too, but there were no leftovers.

After we’d finished the sandwiches and scones, the cakes arrived.  First was this tower of chocolatey goodness, sandwiched with coconut cream and dotted with the occasional raspberry.  The topping was lovely and gooey, but the cream and sponge were a little cold – it felt like it had just been taken out of the fridge.  Still, it was totally delicious.  And, much like the sandwich, this was the normal, full-size offering from the main menu, so it was quite the battle on top of the food we’d already eaten.  The best kind of battle, though.

We had to take the last slice of cake away with us:  a raw peanut butter and chocolate cheesecake.  It pains me to admit it when I can’t finish a meal, but it would have taken a pretty serious eater to get through all of this.  Full size cake slices, I remind you!  As it was, we didn’t eat again for the rest of the day.  We devoured this cake the next day, when we were ready for food once more, and it was good:  the chocolate layer at the top was really rich, and as a whole it had the perfect cheesecake texture.  I would have like a bit more peanut butter, but other than that it was spot on.

In conclusion, I can only praise the food we had.  There were some excellent vegan treats to be had, and there was a very tempting-sounding vegan breakfast on the menu, if you’re ever in that neck of the woods.  The staff were really lovely, and there’s a vegan baker there, so you can rest assured that they have a good understanding of veganism and aren’t making any mistakes behind the scenes.  But I’m not convinced that the food really comprised an afternoon tea:  there was no finger food, no little bites.  The more food the merrier, but it’s easier to feel like a glutton if you devour a gigantic sandwich and three full-sized baked goods.  Perhaps I enjoy the deception of the delicate nibbles – it just feels less piggish to work your way through them!  I would definitely recommend Crosby Tea Rooms for a meal or a cake, but only for afternoon tea, if you don’t eat for 24 hours beforehand.