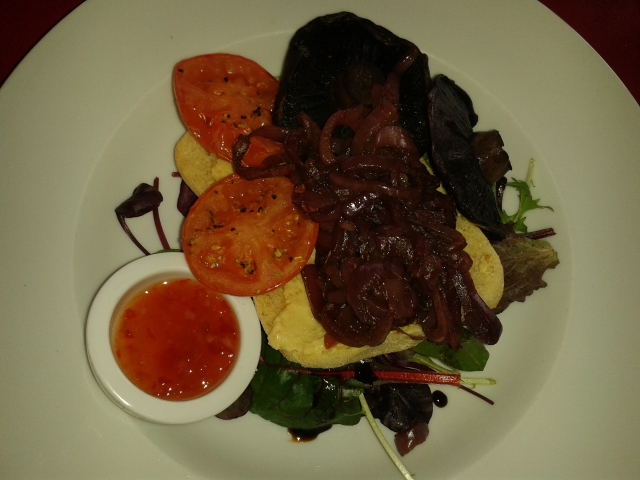 Bagels are the obvious choice for a breakfast sandwich, but I found something a bit different in Chorlton.

This place was not even on my radar until someone commented in the Manchester Vegan Facebook group that this was the best vegan breakfast in the city.  I immediately dropped what I was doing and hunted down the menu online, and was intrigued to see that it was not the typical cooked breakfast.  So off I went to investigate.  The Post Box Cafe is just a couple of minutes from the Chorlton Metrolink stop, so it’s very accessible and I must have walked past it a hundred times without popping in.

The food is very different from the usual breakfast fare:  a toasted ciabatta, spread with hummus, perched atop some leaves, and topped with roasted mushrooms and tomatoes and caramelised onions.  On the side is some sweet chilli sauce.  It was nice…but was it breakfast?  I don’t think salad leaves and chilli sauce belong at the breakfast table.  The other elements are breakfasty enough (toast, those bloody ubiquitous tomatoes, mushrooms and onions), but I felt like this was more of a lunchtime sandwich offering.  I would have it again, but not in the morning.

That said, it was nice to discover a new place, even if there appears to only be one labelled vegan item on the menu.  It was a place that I always thought looked a bit shabby from the outside, but was actually quite charming when you got in – if rather popular with the pensioner crowd. 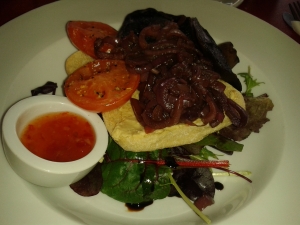 Speed of service:  it was pretty swift, and the place wasn’t too crowded on a workday at 9:30am.  No complaints.  4/5

Value for money:  at £6, I feel this was a bit steep.  How much do you really pay for a tomato, couple of mushrooms and onions and a pot of hummus?  I didn’t feel like any of the ingredients or the components were really special enough to warrant the price tag.  If there were a sausage or some kind of patty that had required more time and ingredients, then it would be justified.  2/5

Quality of cooking:  everything was toasty warm, the vegetables were juicy, it was good.  4/5

Creativity:  it was definitely unique, and I like places that think outside the box and try to put their own stamp on a breakfast – it should be different to what we usually rustle up at home.  I would have liked a few more breakfasty elements though, I suppose.  3/5