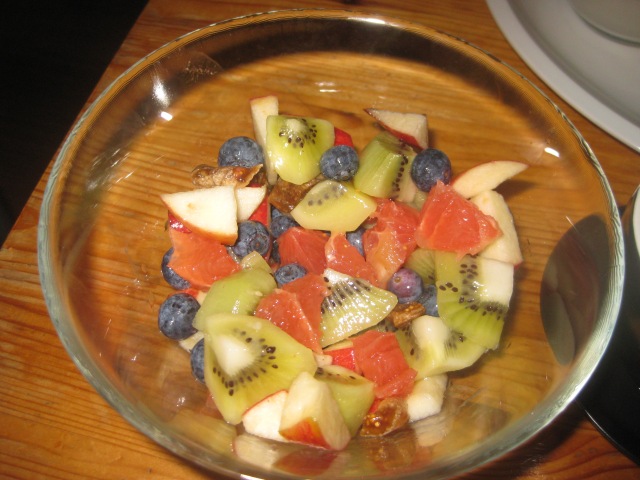 The “something blue” here could be the blueberries above. Or it could equally describe my feelings after eating the most disappointing breakfast ever.

During our Easter trip to Amsterdam, we went for what sounded like an exciting raw breakfast at Alchemist Kitchen.  I’m undecided about raw food – the desserts are good, the salads are, of course, packed with flavour, but wouldn’t some things just be better cooked?  I was feeling quite optimistic about breakfast though – foolishly, as it turned out.  We were the only customers at 10:30am, and I have to say on reflection that I’m not surprised it wasn’t jumping (in fairness, it was busy when we passed by that evening, and the pies did look pretty tempting). 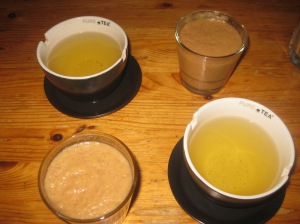 We ordered the 12 euro breakfast plate, which promised granola, coconut yoghurt, bread, jam and coconut butter, alongside the tea and smoothie of the day.  We were told when we ordered that there was no granola, so we’d get a fruit salad instead.  Obviously at that point we should have stood up and walked away.  Why didn’t we?!  It’s a question that still haunts me to this day.  But we stuck it out and waited with a sense of impending doom.  The tea arrived very quickly.  We were expecting something fruity or exotic as it was the tea of the day, but in actual fact it was pretty non-descript.  About ten minutes later the smoothie arrived, and we were invited to guess the flavours:  it was apple and cinnamon, and it was the highlight of the meal.  Alas, it was pretty small, and we still had a long wait for food, despite the fact that the cafe was empty (and the food was raw, so it’s not like it needed cooking).  We struggled to eke out our drinks long enough for the food to arrive. 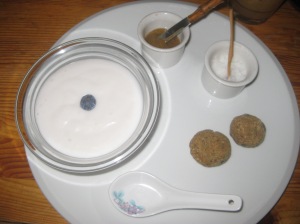 And this was our sad little plate, accompanied by the colourful bowl of fruit up top for us to share.  Whither the bread?  That’s the two dough balls.  They were about the size of ping-pong balls and were quite dense – I wasn’t a fan, though Dr HH said they were the best bit.  In the little ramekins we had some coconut oil (which I thought the best part), and a ‘jelly’ whose flavour we couldn’t quite place.  That big bowl is full of coconut yoghurt and topped with a solitary, unhappy little blueberry.  I love coconut yoghurt, I think it’s luxurious and tropical and everything good.  But this stuff was sour.  It was in desperate need of something to sweeten it.  Even with all the fruit toppled in, it just wasn’t good.

The cafe itself is a nice place – it’s pretty, bright and airy, with a good pile of board games and books.  And the other food did look good.  I just wouldn’t recommend it for breakfast.  Happy Cow Amsterdam has 22 listings for ‘Bagels and Beans’ around the city, and there was one just down the road on Overtoom – I really wish we’d gone there instead.  It’s nice to be adventurous and try something different, but maybe breakfast isn’t the time to gamble:  I’m a much nicer person on a full, happy belly.

Speed of service:  very slow, considering how empty it was, and also poor pacing:  we scarcely had any drinks left by the time the food arrived.  Considering the only food preparation really should have been chopping the fruit, there wasn’t much of an excuse.  1/5

Value for money:  I could have bought a big pot of yoghurt and some fruit in the supermarket and enjoyed it more.  2/5

Quality of cooking:  obviously there was no cooking involved, but I will comment on the fact that the yoghurt was almost inedibly sour.  And minus points for not even having the key breakfast ingredient:  granola.  If you run out at breakfast the day before, make some more!  2/5

Creativity:  this is hard to judge.  I like the idea of a raw breakfast, and I was excited by the description of the plate before it arrived.  I’ll give it a three just for being different…although it turns out there’s a reason it’s not a classic.  3/5