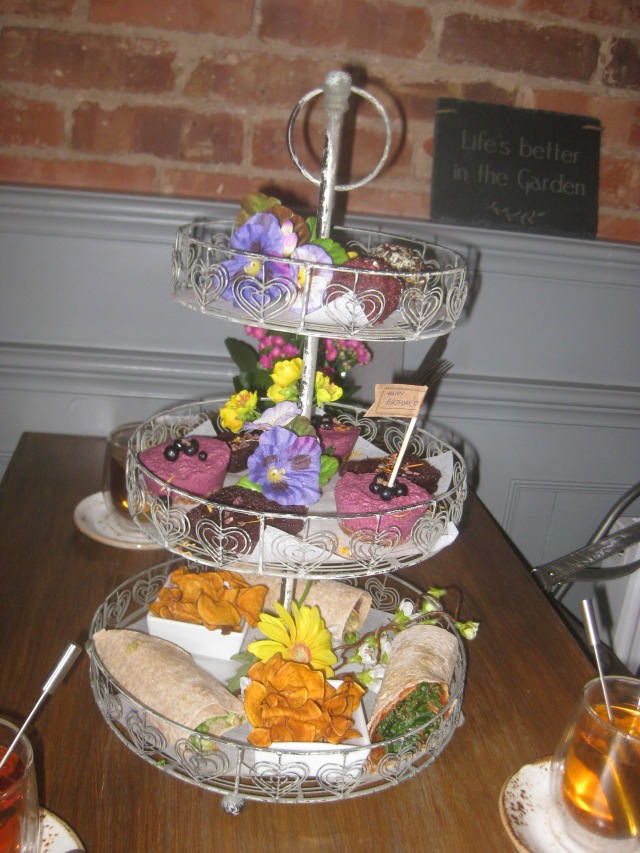 And so we come to the last afternoon tea of the year.  As the summery colours suggest, this was devoured back in August to celebrate my mum’s birthday before I moved abroad.  It was a hectic time, so I was delighted to find yet another vegan afternoon tea on my doorstep (practically).  The Garden is a lovely place in the posh part of Manchester, where afternoon tea costs £20 per person and they ask that you give 1 week’s notice.

It was obviously an inviting display, and we were keen to tuck in.  The savoury plate offered three different kinds of wrap:  falafel and hummus; garden salad and avocado; and tomato tapenade.  The first two were extremely well-received, whereas the latter was fine but not spectacular.  They all looked really tempting, but it was a shame to not be able to try one of each. 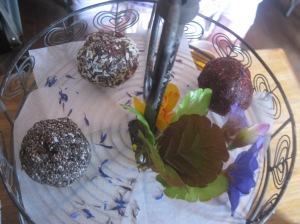 Instead of scones we had the three raw bliss balls on the top plate.  Again, it was disappointing not to have one each, but we sliced them into three and shared them around.  There was cacao and chia, chocolate and berry, and date and coconut.  They were all really good actually, and we all had a different favourite.  The chia seed one tasted like marzipan, and the chocolate and berry one was just like a Nakd bar.  Delicious, and unusual in an afternoon tea.  Of course, I would have preferred a scone, but at least there were some cakes to come. 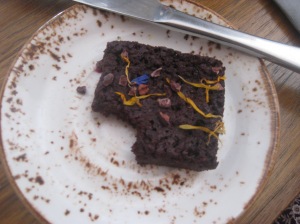 The treat plate consisted of a chocolate brownie and a raw cheesecake – one for each of us, at last!  I loved the brownie, I thought it very intense, moist and chocolatey, and had a wonderful hint of coconut.  Everyone else thought it was a bit too much, so perhaps it’s best for those with a real sweet tooth.

Everyone agreed that the little berry cheesecake was the highlight.  The berries on top were tart, and the cake itself was smooth, creamy and fruity with a nice nutty base.

It was a nice twist on the afternoon tea – really colourful and fresh, with some unusual ideas.  Like Teacup, it was quite creative, but I’d say it had the edge because it did at least have some cakes.  I’d recommend this place for afternoon tea (or for lunch – the main menu is really tempting too), but only if you’re prepared for a twist on the classic.

2015 was an excellent year for afternoon tea, and I was pleased at how easy it was to find the eleven I did.  I even had a few back-up choices that I didn’t make it to in the end, so it’s reassuring to know that there are still more places to discover, even though I can no longer visit one a month.  I’ve been amazed by the contrast between the afternoon teas I’ve had:  there have been plenty of surprises along the way.  If you know any other good options I’ve missed, let me know.  I’ll certainly try to visit a few in 2016, purely in the name of research, of course.