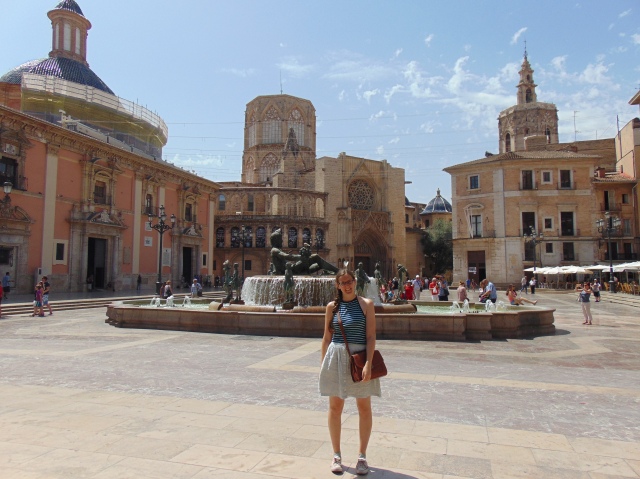 After Madrid, we made our way to Valencia.  It was welcome relief from the absolute chaos of Madrid:  fewer tourists, easier to get around on foot, and the gentle lapping waves of the sea.  There was still a good vegan scene, though this time booking definitely wasn’t necessary.

On our first night we ate at Nomit,  a 100% vegan burger place.  It opens at 8:30pm, but the kitchen doesn’t open till 9pm – we didn’t even get a menu (or the air con switched on) while we waited.  When we were eventually allowed to peruse the menu, Dr HH eagerly chose the Morrissey burger.  It was a good choice!  The patty was made of pumpkin, beans and lentils, it was crispy on the outside, and it was delicious.

I didn’t choose a burger, surprisingly.  I got this gigantic seitan and hummus wrap. It was huge and filling.  The seitan was good, the hummus was generous and the pita was lovely and soft.  I wish it had had a little something extra for seasoning though – a little kick of spice or flavour from something.  While both of our main events were delicious, the sides left a little to be desired.  Two potato wedges?!  TWO?!  And they weren’t even crispy!

Nomit is quite a new place, and it has a lot of promise.  Service was really friendly, once we hit the 9pm mark anyway.  There was only one other guest the whole time we were in, which is such a shame.  Hopefully they will make a few little tweaks and pick up more custom.

The next day we had a typical Spanish lunch set menu at Tarta de Zanahoria.  Alas, this also involves typical Spanish lunch times:  it’s open 2-4pm.  The entire lunch service is done by one woman, both cooking and serving, and this was quite the achievement.  They deserve all the success in the world because she still managed to explain things to us in English and keep a smile on her face the whole time!  It’s quite a small place, so maybe booking would be a good idea here – it was full.

To begin with, there’s a serve yourself salad bar.  We enjoyed these amazing courgette ribbons in pesto and chickpeas with red cabbage.  We were also served a green smoothie.

There were two choices for the mains, so we got one each and split them.  The pad thai was nice, with its noodles, broccoli, nuts, mushrooms and carrots.  It would have been improved by a bit more spice though.

The mushroom ceviche was spectacular!  It featured mashed potato, avocado, mushroom and tomato, and it was so refreshing and cool. 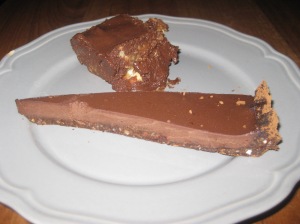 We also split the desserts.  You know you’re onto a winner when both options are chocolatey.  The tart was rich and decadent, and the square was a little bit spongy, a little bit moussey, and it was amazing!  It cost us €11 each for all this food, and we were very satisfied indeed.  This seems like a great business to support.

Time for tapas now!  Nehuen Tasca Vegana is in Cabanyal, close to the beach, and it’s casual so you can combine a visit to the two.  It’s really nice and relaxed inside, I thoroughly enjoyed our visit.  The menu is written on chalkboards and includes some tapas and some main dishes.  We used a combination of Google Translate and help from the waitress to fathom it.

We got two tapas plates to start.  The smoked aubergine spread was delicious, and the crispy mini pizza base was amazing.  If you go to Valencia, make sure you get this.  The croquettes are available with three fillings.  We chose miso and tofu, but you couldn’t have guessed it – the texture was amazing, but the flavour was really lacking. 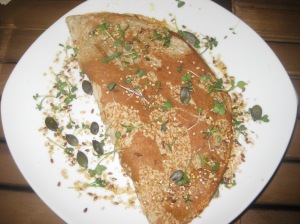 We also shared a couple of mains, that we’d thought would be tapas.  The vegetable ‘cake’ (Google Translate had promised us pie) was really tasty and savoury.  The quinoa and sweet potato crepe was a bit of a mixed bag:  the crepe itself was delightful, but it was spread with sweet potato puree which was a bit too sweet.

Nevertheless, we were very happy.  This place is cheap and cheerful, and wine is only €1 a glass, if you need any extra motivation.

Miobio was another place on my hit list.  It’s in Rusafa, which is the trendy/arty part of town, but it was actually a rather upscale restaurant.  Throughout our meal we were worried about how quiet it was, but at about 10pm loads of people came in.  The menu was only in Spanish, but again, we got some help.  The main courses are all pizzas, burgers or wraps.  As we were already doing pretty well with burgers, we decided to go for pizzas.  Dr HH got this one, the impressively titled ‘exclusiva pizza’.  There was no cheese on it, but it was topped with mushrooms, courgette, rocket and olive tapenade.  He said the tapenade really made it, it was so salty and delicious.

Mine was the coco-cheese pizza.  The base was lovely and crispy, and it was topped with mushrooms, leeks, tempeh bacon cubes and tasty coconut cheese.  Also, lots of rocket, which I hate, but at least its’s easily picked off.  Both pizzas were really good, but small for the price.  I suppose this is the price you pay for organic food!

Even though it was expensive, we couldn’t resist a pud.  And just look at this apple cake!  It was basically a cheesecake, with a creamy apple part.  It was tasty as it was, but then with the added crumbs for texture and peanut butter and horchata creams, it was just sublime.  This place really was good, but it’s hard to justify the price – only for a treat, unfortunately.

We had a slightly confusing lunch at Kimpira one day.  It’s not all vegan, and the menu is marked with allergies, rather than a simple ‘V for vegan’, so it took some effort.  The menu also doesn’t refer to any soft drinks, and we were sneered at for gambling and asking for coke – they’re all organic, don’t you know?  In the end, it was expensive but pretty good.

I had the Kimpi Burger, which had a thin but tasty, herby patty and a nice slice of cheese.  The menu warned that it came with “chef’s special ingredients”, which sounded a bit worrying to someone who loves plain burgers.  So imagine my delight when the surprise element was onion rings!  They were delicious.  I also enjoyed the accompanying yuca chips, heavily dusted with paprika.

Dr HH’s dish was somewhat less coherent.  We thought he’d ordered an Indonesian sandwich, but this is what he was served.  It involved a sweet potato and tempeh tower, avocado salad and a papadum.  It was a bit baffling, and it in no way tasted of Indonesia.  This place probably wouldn’t be on our list if we returned to Valencia.

Our final meal in Valencia, at The Nature, was the very definition of cheap and cheerful.  It’s a €7.50 all-you-can-eat buffet with Asian leanings.  The food is greasy and filling, and really hits the spot.  It’s a huge restaurant, so you definitely don’t need to book.  There’s a great big table full of food to serve yourself – though unfortunately, there are no labels and the sweet dishes are just scattered in with everything else, so you may surprise yourself with some mochi or fried bananas mid-meal.  There’s lots of fried food, which is exactly what I want from this kind of buffet.  The spring rolls and wontons were exceptional.  There are also lots of dishes with a mock meat focus.  All in all, it wasn’t the best food we had in Valencia, but it was great when we were hungry and in need.

We didn’t have any big plans in Valencia, besides a day trip to Xativa to see this amazing castle.  Definitely worth the climb! 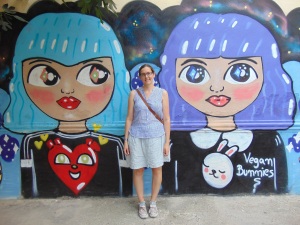 In the city we enjoyed some of the historic sights, but also took in a lot of street art.  There is plenty of it, including some by the Vegan Bunnies. The old town centre is impressive too, and the market was well worth a look – we got some phenomenally good cherries there!  Valencia was a much more relaxing destination than the other Spanish cities we visited – it was nice to take our feet off the pedals and take life at a more leisurely pace.  And with so many good vegan eateries, it’s definitely a good city break destination.

7 Responses to Vegan in Valencia