Last summer I made my maiden voyage to the Lake District, a prime holiday destination for most northerners, but one that was entirely overlooked by my family (we were all about Scarborough and Flamingo Land, of course).

Dr HH and I drove up to Grasmere, where it was impossible to find parking in the town centre (bloody tourists!).  We had to park a bit out of town, but this allowed us to find a quiet spot by some water to have our picnic of leftovers.  It also afforded us one of the greatest sights of the holiday:  on the walk into town, we passed a foreign tourist carrying her backpack on her front, as tourists often do in city centres for safety.  On the quiet streets of Grasmere, it’s not really necessary to take such precautions.  She must have heard terrible things about the crime rate in England! 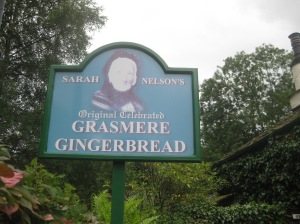 Why did we start our adventure in Grasmere?  For the gingerbread, of course!  The gingerbread from Sarah Nelson’s Gingerbread Shop is all vegan, and the staff are happy to confirm this.  When we were walking there, Dr HH had the cheek to complain that sometimes I take him on very long quests for vegan food.  Well, one bite of gingerbread soon shut him up! 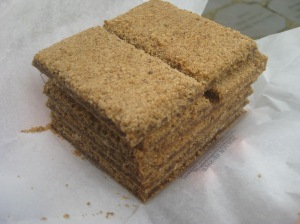 It was £5.50 for twelve pieces, and it took all my willpower not to eat the whole lot in one go.  They were nicely-spiced, sugary and delicious!  They also kept pretty well, by which I mean we bought them on Monday afternoon and ate the last pieces on Wednesday night and they were still perfect.

We had to wait a few more days before presenting another bag of twelve to Dr HH’s parents.  I had once attempted to give them some homemade vegan brownies which they declined to eat because they had been cooked in an oven where meat had been cooked too.  So, this gingerbread was the first culinary gift that they actually accepted from me, and they were impressed with it.  Hurrah! 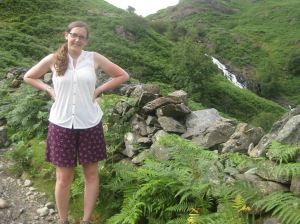 Unsurprisingly, the main thing to do in the Lake District is walk.  From Grasmere you can walk up to Easedale Tarn, which you can see is rather beautiful.  We were ill-prepared and didn’t have much water with us, so we didn’t make it to the top for fear of dehydration and collapse, but we had a good scramble up and would have loved to have been more prepared.  Maybe next time we’ll do it properly – we’ll definitely be heading that way for more gingerbread!