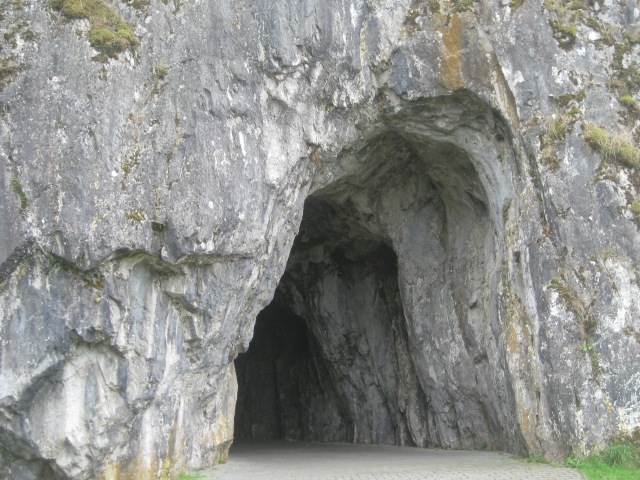 It was in the middle of last year’s MoFo that I visited Brno on a beautiful September weekend.  It was my first proper bit of travelling in the Czech Republic, and I was very excited about visiting its second biggest city.  One of the main attractions is the nearby Punkva cave.  I was dismayed to find out that you can book tickets for cave tours up to a year in advance: that really doesn’t leave many scraps for those of us who decide to visit with one week’s notice.

Fortunately, there were two spaces left on a tour the Saturday we were there. However, the spaces were for an 8:20am tour, which meant us getting up at 6am. After a train, a bus and a 2km walk, we were there at the caves, and I’m pleased to say it was worth it.  So, if you visit Brno, plan in advance, and book your cave tour for a reasonable hour! 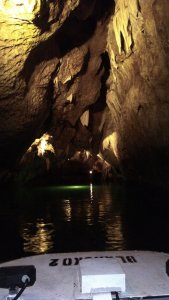 The one hour guided tour of the cave is in Czech, but for foreigners they have an information sheet in various languages which you can read while everyone else listens to the guide.  It’s quite fun, watching the guide point out an interesting rock formation and scanning the sheet to guess what it could be:  the umbrella?  The coconut?  The angel?  We had a big clue when we arrived at the latter:  a hymn was playing.  Likewise, when we stood at the bottom of the Macocha Abyss, grand classical music was blaring out.  I like the fact that they tried to make it an experience, but it felt unnecessary to me:  the grandeur of nature was quite enough, I didn’t need anything to exaggerate that.

The highlight of the tour was when we clambered into little boats for the last part.  Somehow, Dr HH and I bagged the front seats and had a lovely view of the calm water and the intricate ceilings. 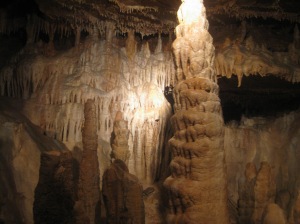 There are lots of other caves within hiking distance in the area.  You don’t need reservations for these ones, but you do have to pay, so we limited ourselves to one.  We took a cable car up to the top of the abyss, hiked over to the other caves, and enjoyed another guided tour (with the same language set-up).  Actually, despite the lack of a boat, these caves were more impressive.  There were some pretty colours, some amazing formations that looked like really tall, melting wedding cakes, and in the grandest chamber we got to watch a light show set to a pan-pipe version of Unchained Melody.  We dissolved into bewildered giggles, but everyone else seemed to be ok with it. 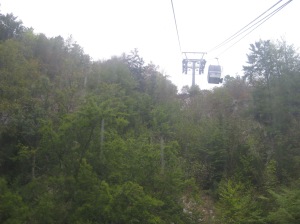 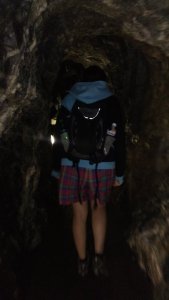 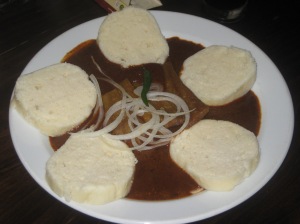 It’s an underground (literally) vegetarian pub, smoking in the main room, more’s the pity, with a smaller non-smoking cavern.  This one isn’t in view of the bar, so service can be a bit patchy, but there’s a stack of menus, including the precious English version.  The non-smoking room is essentially the children’s room as well, so there are plenty of toys.

I wanted proper Czech food, so I ordered the robi goulash (vegan options are clearly marked on the menu).  Robi is a fake meat that is either unique to or beloved by the Czech Republic. I believe it’s made from beetroot, and you can buy it in some of the vegan shops in Prague.  I got a huge portion, and it was lovely!  The smoky sauce was delicious, the meat slices were crispy on the outside, the dumplings were huge – actually, I could have quite happily removed two from the plate and still had enough to eat, which isn’t like me. 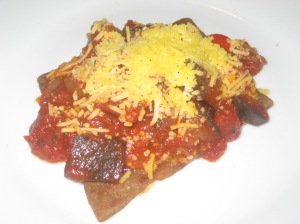 In a bold and surprising move, Dr HH ordered a dish with vegan cheese!  He also had robi, though his was in steak form and topped with vegetable ragout and cheese.  Alas, it was tepid when it was served, but he said the flavours were good.  His dish was substantially smaller than mine, so I gave him those two extra dumplings. 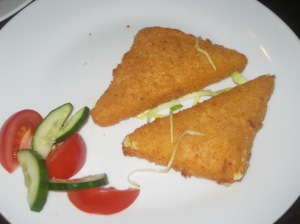 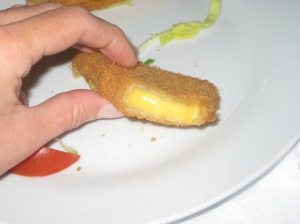 I’ve always imagined most central/eastern European countries to have a very meat-based diet, so I was really surprised to learn that one of the Czech national dishes is vegetarian.  Fried cheese is what Dr HH eats whenever he goes on a work trip to the pub, but for obvious reasons I’d never had the chance to try it in Prague.  But here it was on the Vegalite menu!  There are a few options, both vegetarian and vegan, and we decided to share an order of the vegan Edam fried cheese.  I almost chickened out, because I don’t usually find vegan cheese enjoyable at all.  But I was bold, and it paid off:  it was so good!  In fact, it was the best vegan cheese I’ve ever had and it was really nicely cooked.  I would thoroughly recommend this. 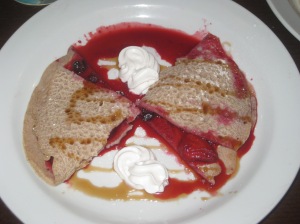 The next day we went back for some crepes, which we just hadn’t been able to squeeze in after all that savoury goodness.  There are two kinds of vegan crepes on the menu, and we decided to order both and split them.  This was the buckwheat crepe with hot forest fruits, cream and caramel (it cost 70kr, which is a whopping £2 – what a bargain!).  The pancakes were nice and thick, but there wasn’t much caramel.  The fruit was quite sharp, so a little more cream for sweetness would have been nice. 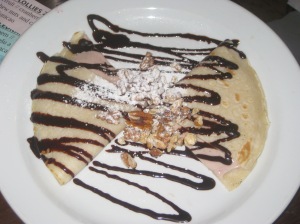 The real winner was the crepe with fruit yoghurt, chocolate and walnuts.  The pancakes were stuffed with pink fruit yoghurt (we couldn’t actually identify the flavour) and the chocolate sauce was divine.  Again, cream would be good, but overall it was delicious!

Most visitors to the Czech Republic make a beeline for Prague and can’t squeeze in many other destinations, but Brno definitely warrants a weekend to itself.