Dr HH spent about a decade studying in Nottingham, so who better to write about it?  The scientist turns historian to tell you all about how Annie’s Burger Shack has changed over the years, but has remained consistently brilliant.  Thanks to the good people at Annie’s for providing a few snaps of their early menus.

I first came across Annie’s Burger Shack in 2010, having heard from some reputable sources that somebody was selling incredible burgers out of the back of The Old Angel Inn. Not a particularly interesting bit of news to a vegetarian like me, until I was told that there were vegetarian and vegan variations of every burger on the menu. About 5 years before that I used to visit The Angel reasonably regularly and to describe it as ‘a bit of a dive’ would be quite kind, so I was a little surprised to hear that it was the new food hotspot of the city.

Keen to give it a try, I rounded up a few friends and in we went one evening. I was with a different crowd to the one from years earlier and they weren’t too enthused by the venue. Maybe it was the dingy walls? Maybe the slightly sticky tables? Perhaps it was the loud thrash metal? Possibly a combination of all three. We picked a table and sure enough there were menus with about 50 different takes on a burger, many of them with heavy metal names – the Slayer and the Lemmy being the two that I can instantly remember. A whole range of different flavours, the Elvis with peanut butter and jelly, the Sherwood burger with broccoli trees, an aubergine burger (that was sadly never available). All served with your choice of fries, curly fries or wedges.

We made our choices and were directed to the kitchen.  This involved us squeezing our way past a game of pool and we were greeted by an affable American lady standing over a couple of grills. I don’t think I’d ever imagined that The Old Angel would have a kitchen! Orders placed, we were invited to stay and watch them being cooked if we really wanted to. I can’t give you much of a review of that burger all those years ago but it was bloody big and bloody good! Pretty cheap too, I think they were about £6 back in those days.

It became a regular haunt for us and it was nice to go back to The Angel after being away for far too long. The food and service were always excellent, with Annie always happy to stop and have a chat. It was quite the celebrity spot too:  Lemmy had been in to try his burger and there was a signed menu on display, and we were there once when the actor that played Michael Myers in the Halloween films, or possibly the guy that played Jason in the Friday 13th films (sorry, I’m not particularly au fait with my horror film actors) was enjoying one of Annie’s fine burgers.

Some months later, disaster struck! There was a kitchen fire and Annie’s Burger Shack was on an indefinite hiatus. Oh, how we all wept and wailed. We waited patiently and eventually Annie re-emerged at a new location, The Old Navigation Inn. A bigger and (without wanting to sound too insulting to The Angel) nicer location, the rock and metal theme of the menu was largely dropped for a blues theme that fit in better with the new venue. The venue may have changed, the names may have changed, the prices may have crept up, but the food was still just as good.

A slightly streamlined menu made the difficult choices a little easier. There were seasonal specials – I remember having a tasty Christmas burger complete with stuffing and sprouts – and some competitions for customers to submit their own burger ideas. Annie’s continued to thrive and grow in popularity, and as time went on it became increasingly difficult to just drop in and have a burger.  Waiting times were getting longer and longer due to the demand, and eventually the time came for Annie to up sticks and open up her own restaurant, Annie’s Burger Shack and Freehouse.

By the time this step had been taken, I had left the fine city of Nottingham behind and now lived in Manchester. My first trip to The Freehouse was Easter 2014 on a weekend away with Ms HH. I’d raved about these burgers and now it was time for her to finally try one. We’d booked a table a couple of weeks in advance and they only had one lunch time spot available during the whole weekend, so Annie’s popularity was still as high as ever. We arrived at the bigger venue now solely dedicated to food, and it was packed. Despite it being busy, the process was smooth and efficient and, most importantly, the food was just as tasty as ever, and Ms HH enjoyed her veganised pulled pork burger.

I visited Nottingham again just before Christmas and managed to book a lunch time table to coincide with my departure from the train. I was under instruction to order vegan so I could write a review for Herbivores’ Heaven and I dutifully obliged. The biggest problem at Annie’s has always been: do you go for something tried and trusted or something new and exotic? After what felt like hours of agonising decision-making, I went for new and exotic and plumped for the Johnny Vegas burger with my usual order of curly fries. I apologise for the poor shaky-cam photography, I was just a little too excited about my food.

It was the usual fake beef patty topped with bacon, warm toffee apple butter, grilled black pudding, sweet chilli paste and a mini Guinness jelly doughnut. It also had the regular toppings of lettuce, tomato, mayonnaise and tomato ketchup. I appreciate everybody’s vegan senses are a-tingling at the mention of Guinness. I didn’t really think about it at the time but it was probably a vegan-friendly stout alternative. I do remember a conversation with Annie years ago where she talked about how important it is to have vegan versions of everything that goes into the burger, and how for one special it had been particularly challenging to find some vegan-friendly port. 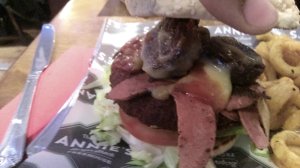 I started with the doughnut. It can only really be described as doughnutty – nice, soft and sticky on the inside with a bit of a crunch on the outside.  As for the burger, I felt it didn’t really try to mimic meat in the way some other burgers I’ve had (take a look at Ms HH’s review of Belzepub in Prague for a good example). The patty was crumbly and didn’t have the same bite of some of the other burgers I’ve eaten. This isn’t to be taken as a criticism, it’s a thoroughly enjoyable burger still, but not necessarily a convincing mock meat.

Unsurprisingly, the toffee apple butter and sweet chilli sauce gave the whole burger a sweetness and a little bit of heat. The facon wasn’t overpowering, I’m sure many of you have experienced the kind of facon that you can still taste for days afterwards but it certainly wasn’t one of those. The black pudding added a little crunch but the spices and flavours of it were perhaps a little lost amongst the flavours of the sauces. Overall, it was a thoroughly enjoyable and filling burger, I liked the sweet and hot flavours that came from the sauces, and the facon and black pudding added a good range of textures to it. The curly fries were nommy as ever! Crispy! Curly! Seasoned to salty perfection!

All in all, another glorious return to Annie’s Burger Shack. The menu has come a long way from the beginnings in The Old Angel. There are a plethora of sides available, nachos, hot dogs, smoothies, shakes and a selection of desserts (with at least one vegan option). There’s an additional bar downstairs so go ahead and make a night of it!

The downside of this upsurge in popularity from humble pub kitchen beginnings to fully fledged burger joint was the ever diminishing visual presence of Annie herself. After the move to The Navigation you didn’t always see her and I’ve not seen her on my few trips to The Freehouse but as long as she keeps the good food coming I can overlook this and I look forward to my next visit to Nottingham and Annie’s. 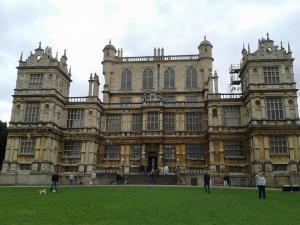 To continue with the MoFo theme of an eatery and an entertainment, I will talk about the great Wollaton Deer Park and Hall. It was thrust into the spotlight a few years ago when it was used as Wayne Manor in the last of the Dark Knight films.  The main change this brought to the place was an assortment of Batman merchandise in the gift shop next to the Robin Hood merchandise you find everywhere else in Nottingham.

Eleven years in Nottingham resulted in many trips to Wollaton Park. Lots of lovely green space, a lake, deer and Wollaton Hall itself was always good fun for a little wander around to see how rich folk used to live and the things they’d collect. It also played host to the Splendour Festival, a one day affair that I went to a few years running where I saw headliners such as Madness, Pet Shop Boys and Dizzee Rascal. It was always a bit of an eclectic mix. During my last couple of years in Nottingham I lived about a 10 minute walk away from the park so it was always the place to go if I needed to get out of the house and have a little wander – possibly to walk off an Annie’s feast!