Liverpool!  It’s probably Manchester’s greatest rival, but it’s alright really.  I usually only go there once or twice a year to meet up with “my Italian friends” – really, two Liverpudlian ladies I lived and worked with in Italy, but that doesn’t have the same glamorous ring to it. It’s the city where we eat, talk and shop, but I don’t usually have time for cultural exploits.  I had to make an exception this year because “catching up with friends” isn’t really the best tip for something to do in a city.  So Dr HH and I went to Tate Liverpool before meeting our friends.

It’s a free gallery, which is always good.  There was a Francis Bacon exhibition on when we visited in July, which you do have to pay to enter, but there are three floors you can visit for free.  On the ground floor we enjoyed the Ella Kruglyanskaya exhibition, which featured numerous exuberant females.

The first and second floors were full of modern art – the kind that is quite baffling to a philistine like me.  There are some handy descriptions giving you some kind of clue as to what the artist is getting at, but truthfully I prefer art that is easier to understand and admire.  Still, a free gallery is always worth a visit, and it’s nice to wander around the Docks when it’s not too cold. 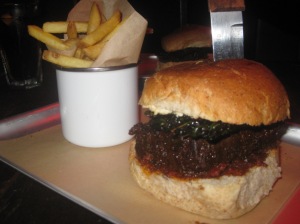 I was looking forward to visiting Mowgli Street Food when I met my Italian friend later, but alas, it was not to be.  It’s one of those annoying places that doesn’t take bookings, meaning you may face a one hour wait for a table, as we did.  It’s especially stupid when you consider that the Manchester branch does take bookings.  Why the ridiculous policy, Mowgli?  Maybe they’re trying to create a buzz by having people queuing and waiting and turned away.  But, if I may rely on a good Shania Twain quote, that don’t impress me much.

We did an about turn and went to Brewdog around the corner instead.  I always assumed it was a northwestern chain, but I’ve been reliably informed that there’s a branch in Bologna, so that shows what I know.  Anyway, it’s a good bar and burger place with a vegan burger and veganisable veggie hotdog, plus various vegan beers.

My omnivore friend also chose the vegan burger, because it sounded more tempting than the veggie one (which included haggis) and she wanted a break from meat.  Hurray for tempting vegan options!  As you can see, it was a giant seitan patty, but it wasn’t the slab I’m used to – it was almost minced like a meaty burger would be.  I really enjoyed the meatiness.  It was topped with crispy kale, barbecue sauce and hummus, and was very tasty indeed.  The chips were even better – I absolutely loved them!

I like going to 100% meatfree places as much as possible, because those are the companies I want to give my money to – but it’s nice to have these highstreet options as well, places you can more easily convince non-vegans to frequent with you and where omnivores are more likely to see the delicious food we really eat.  See, it’s not just kale!