Cookbook of the Month: Oh She Glows Every Day 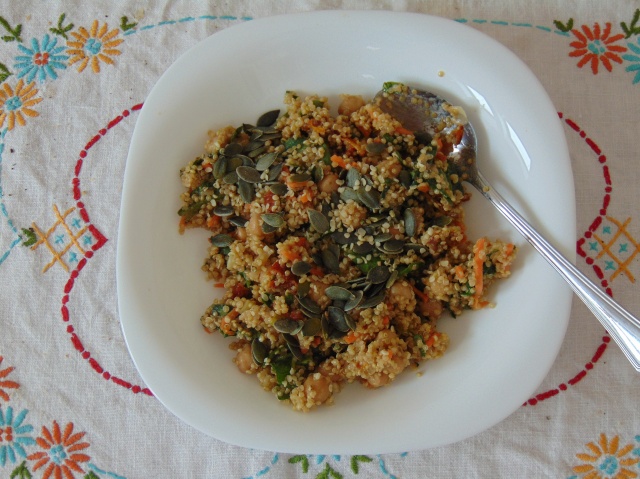 Whenever I’m asked for advice on going vegan, the Oh She Glows book is one of my first recommendations.  I absolutely love it, and still turn to it for a number of the soups, breakfasts, and that life-affirming dip.  It was the book that inspired me to start my cookbook of the month posts, and I used it so much that it actually required two separate posts (here and here).  So it’s safe to say I had high expectations for the follow up, Oh She Glows Every Day.  And I can’t quite put my finger on the reason, but it didn’t quite live up to its predecessor. 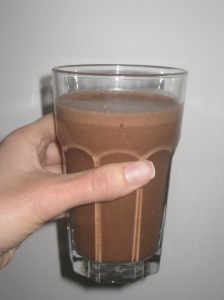 I fell in love with the shakes in the original book, and used to make one each for Dr HH and I every day.  When we moved abroad I stopped doing that, but maybe I should restart.  The salted chocolate hemp shake for two instantly jumped out at me, and I’ll definitely make it again: it was so easy to drink, and had a lovely salty, chocolatey taste.

Surprisingly, I wasn’t that inspired by the breakfast section, and I only made the one morning dish.  My roasted hazelnut almond granola clusters didn’t necessarily turn out as clusters, but they were tasty.  Roasting the nuts first gave them a lovely flavour.

Now that spring has sprung, I’m willing to introduce a few salads to the packed lunch rotation.  This protein power rainbow quinoa salad was tasty, though not particularly rainbow-y.   The dressing was a little too sharp for me, so I’d scale back the red wine vinegar a bit, but otherwise this was quick, easy and tasty.  I liked anything that brings chickpeas into my life. 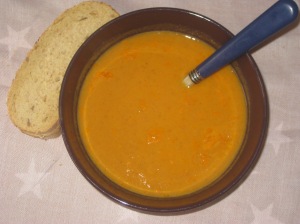 Onto the soups!  I made the creamy Thai carrot sweet potato soup with the last of my precious supply of vegan red curry paste. It was simple and tasty, and I loved the creaminess from the almond butter.  This is my kind of soup.

Trying to get all six vegetables for the six vegetable and cheese soup was no mean feat, considering I live next to the worst supermarket in the world. They have now added broccoli to the list of basic ingredients they don’t sell, and they’ve never stocked sweet potatoes either, so that’s two of the six that required a trip further afield.  It was worth a little effort: it was a thick, hearty and flavoursome soup.

The metabolism-revving spicy cabbage soup was a strange choice for my first recipe from the book, because cabbage soup has quite the bad reputation.  Actually though, it was delicious!  There was plenty of flavour from the nine spice mix, and some good texture thanks to the lentils and potato chunks. Dr HH and I both thoroughly enjoyed it.

The golden French lentil stew was a big hit!  There was a nice variety of vegetables, and the cashews added a good nutty taste.  We’ve already had this a couple of times.

These days I’m eating more pasta at home, so I gave the fusilli lentil mushroom bolognese a go.  It was delicious!  I have a go-to bolognese recipe, but this one might replace it.  The flavours were great and the big mushroom slices added a lovely earthy quality.

I’m a big fan of shepherd’s pie,and this recipe did not let me down.  I loved all the mushrooms and lentils, and will certainly make this again – possibly with a sweet potato topping.

The sweet potato, chickpea and spinach coconut curry was very quick and easy to make, and is a good one to throw together in an emergency (unless, like me, you live near a supermarket that does not stock spinach). It turned out a touch too sweet for our tastes, but generally it was good.  I’d make it again, but tweak the seasoning somewhat.

I made the comforting red lentil and chickpea curry with tom yam paste rather than red curry paste, because that’s the only vegan one I had access to at the time.  It was delicious! Again, it’s easy, filling food.

The sun dried tomato pasta was extremely easy, though of course I had to make it without spinach because, in case I haven’t mentioned it enough, my local supermarket is rubbish.  The creamy sauce is just blended cashews, garlic and sun dried tomatoes, which makes it extremely easy to throw together. Simple, familiar flavours.

I really enjoyed the cookies I made from the first book, so I decided to give these flourless peanut butter cookies a go too.  I would strongly urge you to do the same:  they were quick and easy, and really delicious!  They were oaty, coconutty, peanutty and chocolatey. Those are some of my favourite adjectives.

There wasn’t a bad recipe in the ones I tried, and there are certainly things I’m adding to my regular rotation.  However, I wasn’t as inspired by the book as last time – I wasn’t really motivated to make any of the other dishes.  This is at least partly because it’s not always easy for me to get hold of the necessary ingredients here in Prague, so I had to rule some things out right from the start. I would still recommend this book, but it will always be in the shadow of the original for me.

This entry was posted in Cookbooks and tagged Oh She Glows Every Day review, vegan cookbook review. Bookmark the permalink.

6 Responses to Cookbook of the Month: Oh She Glows Every Day