Cookbook of the Month: The Accidental Vegetarian

I loved this book and Simon Rimmer’s restaurant Greens so much when I was vegetarian.  When I became vegan, I fell out of love with the restaurant (not great for vegans, but I’ve heard it’s improved) and stopped using his vegetarian cookbooks.  While I was looking around for a new cookbook for May, I thought I’d dip back into this one that I used to use extensively and see how vegan-friendly it was.

One thing that’s important to note is that a lot of these recipes were actually served at the restaurant, meaning that they’re much more indulgent than our everyday recipes.  I remember always being aware that the recipes called for a lot of oil, butter and cream, but this time it really hit home just how indulgent they were.  In pretty much every recipe I reduced the recommended quantities of these three ingredients, and I found the food still very tasty and satisfying – so feel free to tone it down and enjoy these every day too.

The spicy red pepper hummus doesn’t look particularly attractive in the mixing bowl, but it was very tasty.  The recipe calls for the juice of three lemons, but I toned it down as that seemed quite excessive.  Simon pairs this recipe with some coriander flatbreads, which I have made before but couldn’t be bothered with this time – the weather has suddenly taken a very summery turn and kitchen time needs to be minimised! 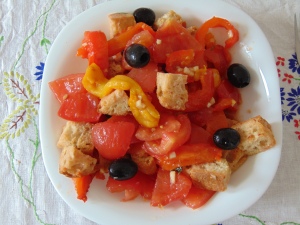 The panzanella was fresh and flavoursome.  Truthfully, it’s a bit of a faff to make:  roasting and peeling the peppers, then attempting to peel the tomatoes (I gave up halfway through and it was fine).  I made this for packed lunches, so I kept the cubes of ciabatta separate until it was time of serve, so they didn’t go completely soggy beforehand.  It was a really lovely salad, probably worth faffing around at the prep stage.  I’ve only ever had homemade panzanella, and it’s my dream to actually have it served to me so I don’t need to worry about all the effort.

The spicy coconut and beetroot soup was the only soup recipe in the book, so I had to try it even though the combination is a little bold for me.  I was quite hesitant to actually take a spoonful, but it was delicious!  You know when something tastes quite weird, but you just can’t stop yourself from eating more?  It was just like that.  I usually tone down the spiciness in Simon Rimmer’s recipes, but this time it was necessary to keep it spicy to balance the sweetness. 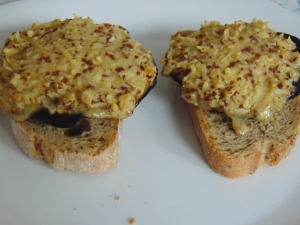 I never even tried mushroom rarebit as a vegetarian, so I was a bit anxious about veganising the recipe.  The rarebit is a mixture of cheese, mustard and egg – I used a Veganz melty cheese and a flax egg, plus a little milk to bind everything together.  The cheese took a bit longer to melt than the recipe stated, as expected, but the result was spot on:  really creamy in texture, and savoury in taste.  We’ll definitely have this again! 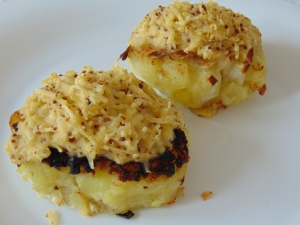 Inspired by this roaring success, I went on to try the leek and potato rosti with rarebit.  I remember making this rosti before years ago, though I can’t remember what I served it with.  This time, alas, I overcooked the potatoes so they didn’t grate well, and the result was more potato cake than rosti. Still, they were delicious!  I veganised the rarebit just using milk this time, no flax egg: it still worked a treat.

From the Big Platefuls section, I tried a classic penne all’arabiata, which I don’t think I’d ever made before.  The flavours were simple and powerful, and it was a great fresh dish.  I’m not sure I’ve ever even ordered this before (it’s always the most boring dish on the menu, in my opinion), so it was actually a pleasant change for me and exceeded my expectations.

I didn’t have a chance to get stuck into making my own dough, so for the gnocchi with wild mushroom and rosemary ragu I used shop-bought gnocchi (DM stores in Prague sell a vegan version) and focused my energies on making that ragu. The recipe called for a lot of tomato puree, so I pulverised two cans of chopped tomatoes and just added a few spoons of puree to thicken it up.  I also couldn’t bring myself to put 850ml red wine in, so I scaled that down a bit too.  The sauce turned out thick and rich – it was really lovely!  The garlicky mushrooms on top were great too.  I’ll definitely come back to this one.

Like most people who were meat-free in the ’90s and ’00s, I’ve had my fill of risotto.  But the lemongrass risotto with lime leaf tapenade sounded like a sufficiently interesting twist, and I’m really glad I gave it a go – it was one of the most flavoursome dishes of the book!  The flavours were well-balanced, with a nice lemony hint to the rice and a big zesty kick from the lime.  As with all of the recipes though, it could have been healthier.  The tapenade called for 75ml of olive oil to serve four people.  I’m not particularly health conscious, and even I couldn’t commit to that.  It worked really well with just half the amount of oil, I found.

I’d made the oriental pie a few times back in the day – it’s a shepherd’s pie with lots of mushrooms and soy sauce.  The recipe is easily veganised:  just use vegan spread and cream instead of dairy ones.  Actually, I completely omitted the cream from the mash, because I wasn’t sure it was necessary for a weeknight meal – not quite so much indulgence, please!  I also used only sweet potatoes for the mash, rather than some regular potatoes too.  I was worried the pie would be a bit light, but it did fill us up (though we only got 4 portions out of it rather than 6) and the flavours were excellent.

Moroccan spaghetti was the first dish Dr HH ever cooked for me, so it has a special place in my heart.  He paired it with the sweet potato salad from this book, but I was too lazy to follow his lead.  I used a tin of chopped tomatoes rather than fresh ones, and I like the extra sauciness.  The sauce is simple but full of flavour, and I love all the chickpeas and flaked almonds.  A definite winner.

The black bean and aubergine chilli is another Dr HH staple (his old flatmate had this book, hence he knows some of the recipes too), so I was a little annoyed to have to make it for myself this time.  Tinned black beans don’t seem to exist here, and I’m far too lazy for overnight soaking, so I just used kidney beans instead.  It was predictably delicious, although I have to say it tastes better when Dr HH is at the helm.

I decided to try the Rendang shallot and asparagus curry, mostly because my rubbish supermarket happened to have both asparagus and shallots in, and nothing that was actually on my shopping list. The sauce was incredibly flavoursome, and the caramelised shallots were delicious, but this did not make very much – we only got three servings out of it.

The aubergine tikka masala was a mixed success.  The marinated aubergine is meant to be skewered and grilled, but we don’t have a grill so I just bunged it in the oven for an hour – the pieces weren’t as tender as I would have liked though.  The tomatoey sauce is meant to be poured over the skewers, but I decided to mix everything together – the result was tasty, but not particularly saucy, as a tikka masala usually is.  It was nice, but not really what I was expecting.

I’ve made the red Thai bean curry several times before, and it’s always better with more exciting veg – green beans and broad beans aren’t exactly spectacular, and the nearest bean I could find was cannelini anyway.  It needed something a bit meatier, I think.  That said, the curry paste is absolutely faultless.

I wish the recipe for strawberry and black pepper lollies had been more specific on the amount of pepper.  For it to be a title ingredient, you’d expect a reasonable amount, no?  I added the recommended “twist” of black pepper, and was afraid of being too heavy-handed, so left it at that.  It just tasted of strawberries. I couldn’t find plain yoghurt, so I used strawberry yoghurt and omitted the sugar from the recipe.  It was nice, but I’ll have to be bolder with the pepper next time.

Pretty much all of the dessert recipes call for about six eggs, making them not the easiest to veganise. I decided to have a go at the chocolate brownies (with marshmallow sauce), as there were only four eggs to contend with – the marshmallow sauce was a non-starter as I don’t know of any vegan brands here in Prague.  I used two big bananas instead of the eggs, and they seemed to do a decent job.  The recipe also called for one cup each of sugar and butter, plus 225g chocolate – and this is meant to be dessert for four people!  I halved the sugar and butter, but stuck with most of the chocolate.  Unsurprisingly, it was still extremely rich and decadent.  (Excuse the flatness – I only have one ovenproof dish here and it’s gigantic so all my traybakes are pancake-flat.)  They were really good brownies.  For a special occasion I’d definitely come back to this recipe and indulge myself.

I was a little daunted by the prospect of trying the hot choccy with churros, and they did turn out to be a little tricky.  I halved the recipe and converted it from grams to cups, so it’s possible that the correct balance of ingredients got a little lost in translation, as Simon kept referring to the batter, when I produced more of a dough.  The batter was meant to be piped into the oil for deep-frying, but it was so thick and heavy I actually just rolled it out and placed the dough rolls into the oil.  In the end they were lovely and crispy outside, but not quite right inside – this recipe definitely needs more tinkering.

The hot chocolate was also not perfect – I added half as much milk as I needed, and it was already much thinner than I’d hoped for, so I left it at that.  Due to the condensed milk, you definitely couldn’t drink this hot chocolate!  I’m glad I gave this recipe a whirl, and I’m going to look at alternative churros recipes to see if I can get it right next time.  The churros recipe was already vegan, and for the hot chocolate I just used non-dairy milk and this vegan condensed milk.

After a month of cooking from this book I’m inspired to dig up some of my old veggie cookbooks again and see what use I can get from them.  I really enjoyed these dishes, and will definitely be dipping into it a little more.  A more experienced vegan baker than me could probably do some good work veganising the other eggy desserts too.  While buying it may not be great value for money for vegans, if this is in your library, you should definitely check it out!

9 Responses to Cookbook of the Month: The Accidental Vegetarian