Usually I choose my holiday destinations based on vegan options, so it seems strange that I even went to the Cinque Terre, nevermind that I enjoyed it so much!  But it’s true: I’m already dreaming of going back one day when the hiking trails are all open.  You can either hike or get the train between the five little villages, but over this summer three of the paths were closed.  As such, we decided to only pack our summer sandals for the whole trip and give the other two paths a miss.  We also only spent a whirlwind 24 hours there, so short hops on the train definitely made sense.  But we will be back one day to do it properly!  Hopefully by the time we do so, the vegan situation will have improved. 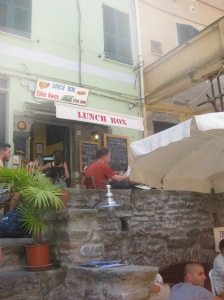 Lunch Box in Vernazza is another of the few places with advertised and labelled vegan options.  You can probably get some classic marinara pizza (just with tomato sauce) or spaghetti with tomato and basil pretty much anywhere, but if you want certified vegan food you seem to be limited to a few sandwiches and a reasonable amount of gelato.  Not too shabby if you’re only there for a few days and not exerting yourself on the trails.

I was looking out for this place because I’d seen online that they had a vegan sandwich.  And here it was! 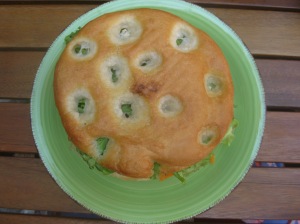 It was a little more expensive than the previous vegan sandwich in Corniglia, and not quite as good – the bread was warm but everything else was cold, and it was a bit heavier on the salad than the roasted veg.  Still, the pesto was really nice, as was the bread.

Top tip if you visit this place: don’t order the local lemonade!  It was €6 for a glass and it was very tart.  Still, it’s a good place for a quick stop. 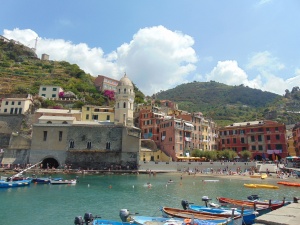 Vernazza itself is really charming too.  The main road runs straight from the train station to the sea (past Lunch Box on the left), making it very compact. When you arrive at the sea, you won’t know if it’s better to gaze out to the sea or back at the colourful houses of the village – everything is just so pretty!