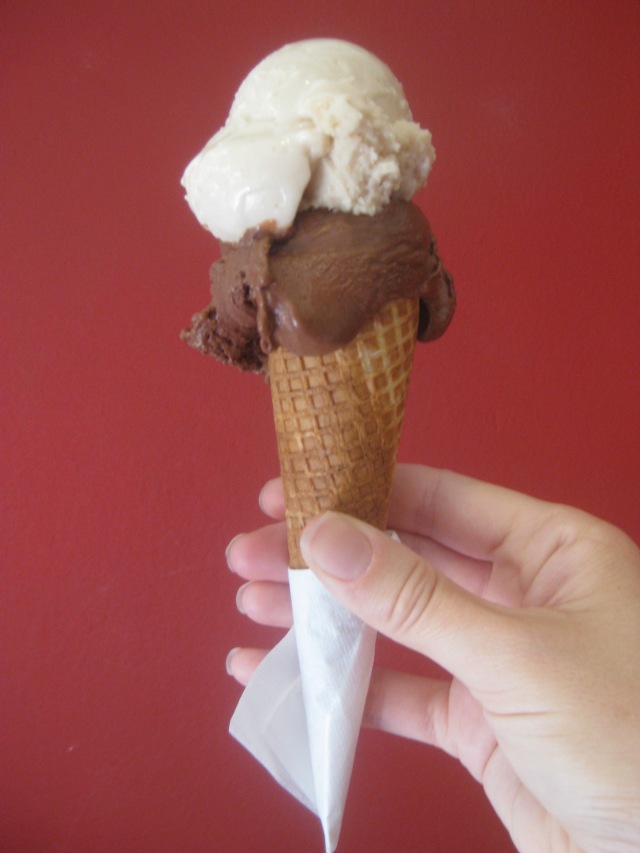 Yesterday I said that the vegan scene really improved once we hit Verona.  Well, Verona was also the turning point for ice cream.  So far I’d only seen dark chocolate and fruit flavours (except for a more exciting flavour in Varenna), but here’s where it starts getting good.

Gelateria Verona was our first stop when we arrived, as it was just a short walk from our airbnb.  It’s not central, but it’s in a nice square and worth a short detour.  The staff were very friendly and spoke perfect English (like most people we dealt with in Italy).

As well as the standard fruit and dark chocolate, this place had one of the flavours I’d been craving from the start:  nocciola.  Hazelnut!  Yes!  The combination of hazelnut and chocolate was like eating a really cold Vego bar…in a cone.  Yes, the cones were also vegan.  Delicious!

The next day we went to L’Arte del Gelato, which was generally less exciting:  their only vegan flavours were fruit, not even a dark chocolate.  At least they were all well-labelled though, and one of their flavours was extremely exciting:  lemon sorbet with chunks of ginger and dark chocolate.  I missed the creamier gelato texture I had become accustomed to, but it was still really tasty.  This one is located in the central hub, so it’s easy to swing by.

The last gelateria we visited in Verona also required a detour, but was worth it.  Gelateria La Romana looked quite fancy, and even provided the possibility of buying whole pots of ice cream to take away.  The staff were really knowledgeable about veganism and helped me to put together my perfect cone:  the cones themselves are vegan, but they coat the inside with chocolate on request – at present, it’s only milk or white chocolate, so don’t get it! 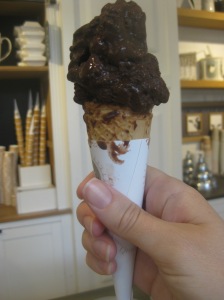 There were a few fruity vegan flavours, but I only had eyes for this one:  ‘crumbles fondente all’amerena’.  Basically, it was sublimely creamy and chocolatey, with lovely biscuity chunks.  If only I’d got a tub of it to take home!