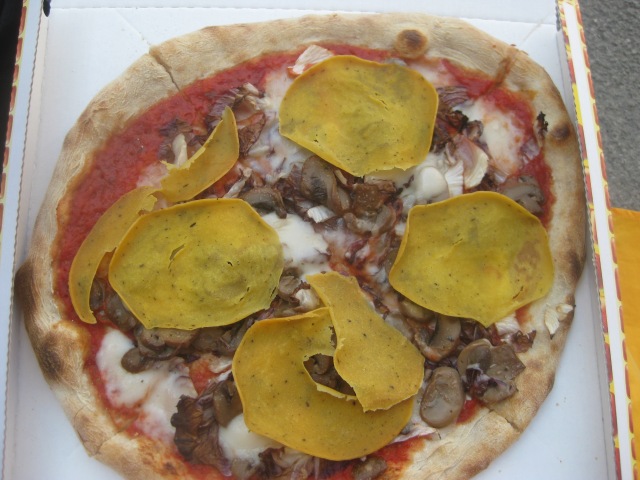 I ate surprisingly little pizza during my fortnight in Italy, but I managed two while in Venice and this was the first, acquired at Pizzeria L’Angelo.  This place serves meat, but it’s extremely vegan-friendly, with around five vegan sandwiches displayed and five pizzas in the vegan section of the blackboard menu.

I got the sirio, which was topped with radicchio, lupine slices, vegan mozzarella and mushrooms.  I had no idea what radicchio was, and apparently I hate it, but it was easy to pick off.  Besides that, I loved this pizza!  It was very generously topped, and the cheese was especially good and creamy.  The meaty slices were tasty, but I wish they’d been baked into the pizza with everything else, rather than just balanced on top.

Pizzeria L’Angelo is a very popular spot in a busy, bustling little alley. It’s pretty close to St Mark’s Square and the real tourist hub, so it’s very convenient too. It’s takeaway only, which poses quite the problem:  where to eat your delicious vegan pizza?  We first found a little spot by the canal next to a shop, but the shop owner came out with the harried look of someone who does this a million times a day and asked us not to eat right by the water as it attracts rats.  Lovely!

So we crossed the bridge to a big square where numerous people were just sitting on the ground eating takeaway from various eateries.  We found a shaded spot outside a bank, at least 10 metres away from the entrance and well out of everyone’s way – or so we thought.  Just as we were finishing up, a local scolded us in Italian, telling us:  “It’s a bank, not a restaurant!” 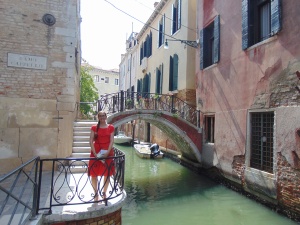 I’ve read a lot about the tourist industry in Venice and how the locals hate it, and it is something I thought about a lot while I was there.  But I felt like that was a bit unfair.  Where are people who get takeaway pizza supposed to eat?  I can’t imagine shouting at the many people who eat sandwiches or burgers on the street in Manchester – but I guess Manchester isn’t as pretty as Venice.

In conclusion, I can’t recommend the pizza here enough, but try to have a plan of where you will eat – or be prepared to be shouted at by a local!