The great gelato quest continues, and indeed concludes, in Bologna.  For any gelato afficianado out there, I would strongly recommend following our route travelling east across Italy rather than the reverse:  our gelato journey basically improved at every stop along the way.  I would have been devastated to start with this great gelato in Bologna and see my options dwindling down as I made my way back to Milan.

We only went to two gelaterias in Bologna, but they were very good indeed.  We started out at Cremeria San Francesco, a nice place in a quiet square, a little away from the centre.  This was perhaps the most vegan-friendly gelateria we visited:  they even had vegan brioche for the beloved gelato-in-brioche dish (I wasn’t that excited by it, surprisingly).  I think only one of their cones was vegan though, so do specify when you order. Above is the menu from July:  you can see a lot of vegan options there, and some quite exciting flavours. 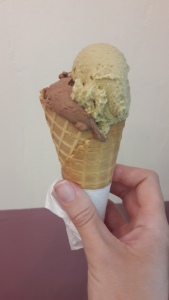 I got the gianduia one, which was really rich and creamy and had dark chocolate chunks.  I paired it with the salty pistachio, which was the most flavoursome gelato I had throughout my whole stay.  It was sublime!  Dr HH and I both agreed that this place provided the best gelato of the two weeks.  Bravo! 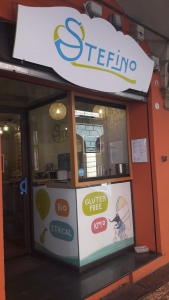 Next stop:  Stefino Bio.  This place was more central, and also had plenty of vegan options, including some exciting ones:  lemon and basil, chocolate and curry (?!).  I decided to play it relatively safe, and chose the two flavours I’d been hoping for all through the holiday and finally found right at the end here:  coconut, and mint choc chip.

The coconut was good, and the mint choc chip was great!  I wish it had been green, but that’s a minor quibble. 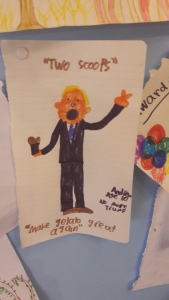 And as if we didn’t already love the Bologna vegan gelato scene enough, check out this artwork left behind by some children at the colouring table!

6 Responses to VeganMoFo 2017: Gelato in Bologna