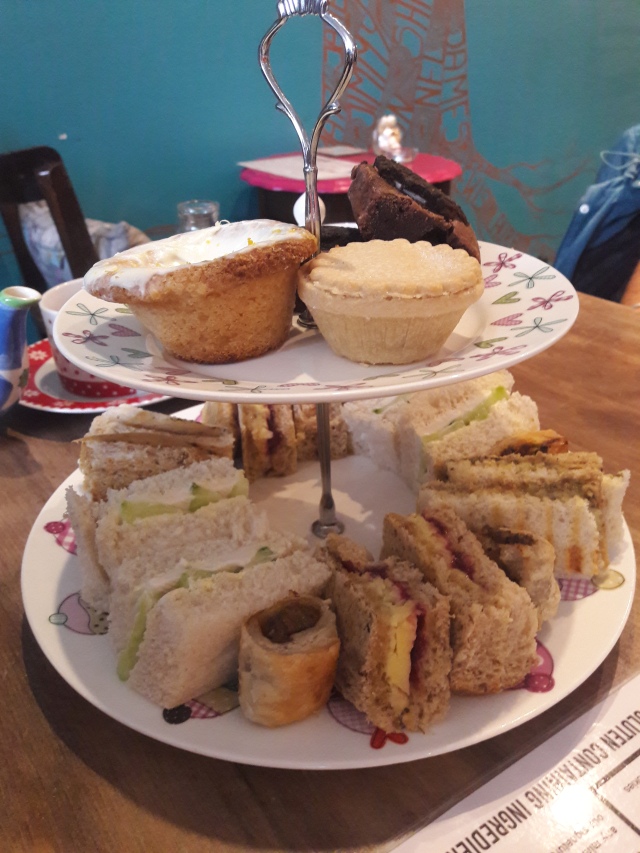 December’s MiniMoFo theme is festive baking, but I haven’t taken to the kitchen just yet.  As always, I’m letting someone else do the hard work for me: take it away, Boho Utopia!  This is an all-veggie cafe in the extremely veg-friendly Manchester suburb, Withington.  Their vegan options have really increased recently, and I’ve been lusting after their freakshakes, extravagant hot chocolates and huge breakfasts for months now.  When I saw they were offering festive vegan afternoon teas in December, I knew I had to make my way there. 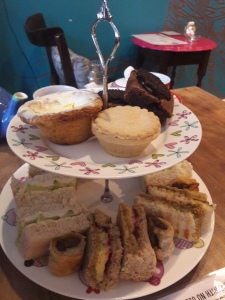 The afternoon tea was £10 each with unlimited tea, and was only available vegan – this wasn’t just the watered down version of the vegetarian one. I heartily approve of this approach!  And this was one of the only completely hummus-free afternoon teas I’ve ever had (and I’ve had a few!), which is a sign that they put some real effort and creativity into their menu. 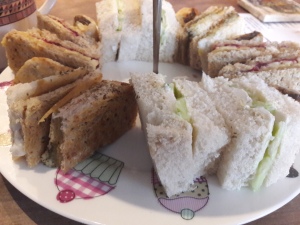 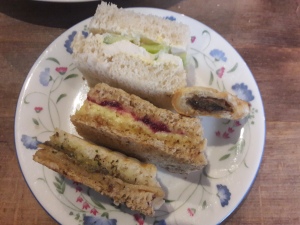 The savoury plate offered us three types of sandwiches and some tasty little sausage rolls.  The cucumber sandwich had an astonishingly thick layer of cream cheese and was really creamy and delicious.  The other two sandwiches were toasted: cheese and cranberry, and pork and apple sauce.  They were both really tasty and festive, and toasting them was a nice touch. We had two each of all these savouries, which was quite a filling first round. 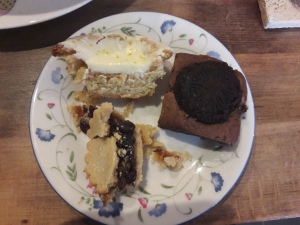 On to the sweet treats!  Actually, this plate was a little less festive, but the mince pie means that it still counts towards the MiniMoFo festive baking theme.  Dr HH found the pie a little sweet, but I loved it – the pastry was especially good.  The lemon drizzle cake was extraordinary!  It had almost a pie-like crust on it which contrasted beautifully with the creamy icing and soft, zingy sponge.  The brownie was meant to be chocolate orange, but turned out to be Oreo – less Christmassy, but no less delicious!

My only gripe about this plate is that we were given our own brownies but had to share the mince pie and the lemon cake.  Don’t get me wrong, I was absolutely stuffed and could barely finish this as it was, but still!  The generosity with the savouries and the endless supply of tea made up for it anyway, and it still remained a steal at £10 each. 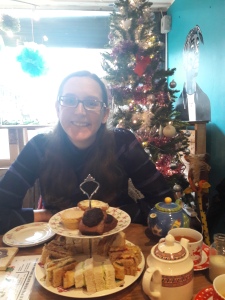 I will leave you on this happy, hearty note with wishes for a holiday season filled with all the delicious vegan treats…and quality time with your loved ones, etc etc.  But mostly good food! Enjoy!