Americans may be offended by this, but to a lot of Europeans, American cuisine just is fast food and burger joints. I’m embracing the stereotype! And I mean, it’s called a diner – what could be more American than that?!

V Rev is something of a Manchester vegan institution, and some of the locals seem weirdly proprietary towards it in a way they aren’t towards all the other vegan places around town. On the one hand, it’s great that people are passionate about it. On the other, it’s rubbish to see people attacked for expressing any less than 100% complimentary opinion about it. I wrote a lukewarm review of V Rev in its old premises. In autumn 2016 it moved on to a bigger and better location, and I think it’s fair to say it experienced a few teething problems, generally more with the staff than the food.  In autumn 2017 it closed due to flooding, and I finally visited it in December when it reopened with a new menu and real plates instead of plastic baskets, at last.

My expectations were quite low from the negative reviews, and as such V Rev was comfortably better than expected.  Some of the complaints were that it was always impossible to get a seat and that the tables are too close together – we arrived for an early lunch, but even by the time we left there were still free tables, and we felt there was a respectable distance between them.  The other main complaint is the waiting times, and even when we were the only customers we still had to wait over 30 minutes for our food, which I feel isn’t unreasonable but just starting to push it perhaps.  The food was warm when it arrived, which we’d heard wasn’t always the case.

There were two chicken-style burgers on the menu, and three or four beef.  We both went for chicken.  This was my southwestern one, which had some spicy mayo, a good slab of cheese and some delicious fried onions.

Dr HH got the kenan and kale, which had added avocado – always a smart move! We both enjoyed our burgers, but found it a shame that both chicken options were quite similar.  We also found the seitan patties a little tough in places, but generally approved of that good crispy exterior.  Yum!

All the burgers come with regular fries for £1 and loaded for £2. I got the regular ones and thought they were the perfect fries!  Dr HH went bold with the poutine fries, which he really enjoyed.

This probably would have been enough to fill us up, but I believe vegan law states that if you see mac n cheese balls on the menu, you have to order them.  So we did, and I regret nothing!  They were crispy and delicious, and I’m trying to figure out how to recreate them. 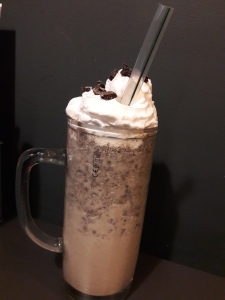 There’s quite a tempting cocktail menu, but as it was barely midday I didn’t feel that I could indulge.  Instead, we shared a cookies and cream milkshake.  The thin, watery milkshakes are another common grievance I see online, and to those complainers I simply say: stir!  A good stir resulted in a consistently thicker and creamier milkshake, which was totally delicious.

All in all, V Rev was better than its detractors would have me believe, but not quite the vegan haven that its biggest supporters claim.  It’s definitely getting there though, I think.  My biggest complaint on the day was that the restaurant was absolutely freezing – we had to keep our coats on! Bear that in mind if you’re visiting in the colder months!

If  you’ve been to V Rev, what was your verdict? And what does American cuisine suggest to you?