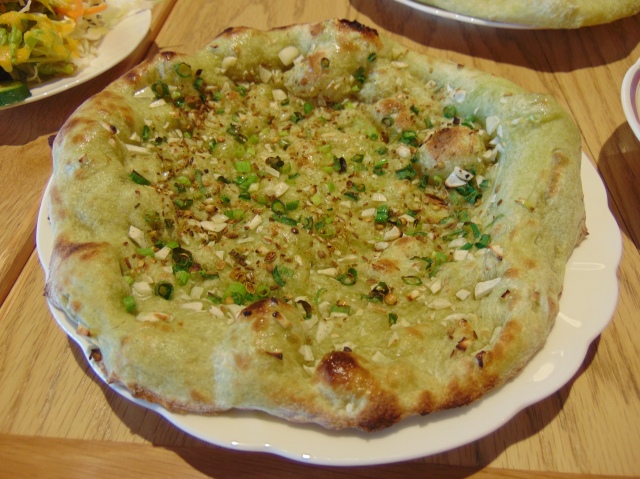 Harajuku has a reputation for all the crazy cosplay kids and fun outfits, but when we went on a Wednesday lunchtime it was disappointingly sane. In fact, one of the things that disappointed me about Japan was how unexciting the fashion was: everyone wore black or neutral colours, and regular high street clothes. Everyone seemed to be dressing to blend in all the time. Whenever we saw anyone wearing anything brightly coloured or with a bold pattern, we were very excited!

While the fashions of Harajuku may have been disappointing, the food was not! We were in the area to take a stroll along Takeshita-dori, a shopping street which was billed as quirky and fun but was actually quite underwhelming and repetitive, and visit the nearby Meiji shrine, which was much better. We had eyed up this Indian vegetarian restaurant as an ideal lunch spot.

The menu clearly labelled which items were vegan, and there were plenty to choose from – there was also a lunch buffet on, which did not label the vegan dishes, which was a bit disappointing. So we stuck with the menu and each ordered a premier set: curry, salad, and a choice of rice or naan. 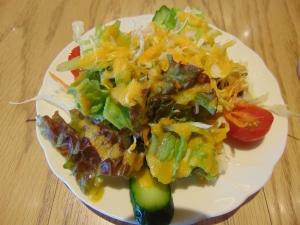 The salad had this weird dressing that we encountered in many eateries in Japan – I don’t know what it was exactly, but there was lots of it, and it wasn’t great.

I ordered my go-to Indian dish: aloo gobi. It was a very good one too! It was spiced, but not too spicy, and had really good chunks of potato.

Dr HH was equally pleased with his baingan bharta, a tasty aubergine curry. It was listed as “spicy”, but he deemed it a solid “medium”, so bear that in mind if you’re ordering here.

We’re no fools, so we both ordered bread instead of rice. There were several vegan naans, so we split a garlic and a sesame. Garlic naan is always our first choice, and this was a good one. Sesame was something of a novelty, and we only ordered it because we’d never seen such a dish before. It was a bit underwhelming, and there’s perhaps a reason it hasn’t really caught on.

We were very excited to see vegan soy mango lassis on the menu, so we had to try them – it looked quite curdled, but tasted delicious! There were a few vegan dessert options too, but we were too full to partake.

This place was also our first encounter with the Japanese phenomenon of the call button. Quite often in Japan there’s a little bell or buzzer, and you press it when you want service. On the one hand, it’s obviously very practical and saves us that five minute dance of trying to catch someone’s eye. But on the other hand, it feels very demanding and decidedly non-British to press a button and demand service! We did eventually become a little bolder when using these over the three weeks, but it’s hard not to feel apologetic about it.

Have you ever had to ring a bell for table service in a restaurant? How socially awkward was it for you?!