Nagoya only ended up on our Japanese itinerary because there was a sumo wrestling tournament on and we desperately wanted to see it. It was definitely worth going to the sumo, but the city itself was a fun place too and I’m glad we got to see it.

Along with a charming Japanese garden, we also visited the Toyota Museum, which was really fun. For one thing, there was a robot playing the violin! It really played it! It wobbled its head and everything. We also got to see some car assembly robots, which were really fascinating. I wasn’t expecting this museum to be my kind of thing (a bit too sciencey, perhaps), but it was truly excellent!

The sumo was a fun experience, but it was about 90% ceremony, 10% wrestling. It was interesting to watch, and the matches themselves were exciting, but there was a lot of waiting around for action while people bowed and squatted. It was really fun still.

And there were a few vegan places in town too, so hurray for that! When we arrived at lunchtime we made a beeline for Vegefirst, which was a tiny, mostly takeaway bento box place near the castle. It had already sold out at 1:15pm, but one local person arrived right behind us and the staff kindly agreed to hook us up with something.

There was no menu, we were simply given the daily set: brown rice with beans, some kind of tofu dumpling topped with sweet aubergine, various salads, and an excellent curried tofu scramble. We also got a pot of potent spice on the side! This wasn’t the most exciting meal, but it was a tasty, solid lunch, and it was quite a novelty for us. I really liked the idea of serving the little elements in separate cake cases, but found the plastic use a bit wasteful. 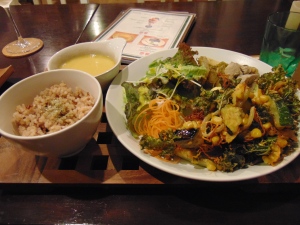 Our next spot was another fun little place, Vegi Kitchen GuGu, which was a cosy, laidback cafe. The daily specials menu was not in English, but the regular menu was – the staff spoke little English, but everything went smoothly. Dr HH ordered the tempura plate, because who could resist that?! We were expecting golden, crispy vegetables like we had in Kawaguchiko a couple of days earlier, but instead he was served a veritable nest of oily, salty tempura goodness, all merged together. It included corn, kale, and other good veg. He declared it delicious! It also came with some rice and a nice corn soup.

I got the same sides with mine, but they weren’t really necessary with my nugget plate (that may not have been the correct name, but let’s not kid ourselves: it’s a nugget plate).

The chicken nuggets were delicious, and the chips were nice but a wee bit pale. The vibrant pink sauce tasted unexpectedly of olives, which was nice, but I was not very happy that there was already ketchup on the chips when it was served. Let people decide their own level of sauciness! I like my chips dry, but Dr HH was delighted to take these saucy ones off my hands.

Then finally we found the first cake of the holiday! It was a barren few days, I can tell you. We both ordered the chocolate brownie, which was a nice cake but definitely not a brownie. It was not gooey at all, nor too sweet, but a very pleasant cake.

We were so impressed that we got a couple of slices of carrot and banana cake to take away for breakfast the next day. Alas, this one was surprisingly dry and flavourless – how can that happen with a banana cake?!

Our final stop in Nagoya was actually a familiar one: Itadaki Zen. We’ve previously visited one of these restaurants in London, so we were excited about going to a proper Japanese branch. I was less excited when I learned it was one of those places which requires you to remove your shoes on entry. Sigh. Anyway, we were there right at opening time and there was only one other customer the whole time, but service was painfully slow – we were watching our clocks so we could hop on a train to our next destination, but not much was happening. At least we got this little dish of seaweed and salad to keep us going in the long wait.

We both ordered lunch sets, with slight differences. Dr HH ordered the sushi, which I think was the only sushi we had in three weeks. These were tasty little morsels. 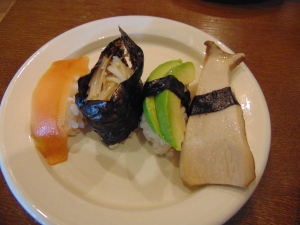 I ordered the nigiri, which were topped with carrot, mushrooms, avocado, and a giant mushroom. They were simple but delicious! Please note that these are not great for sharing, because obviously everyone wants that giant mushroom.

These dishes were the accompaniments to the main event, a big bowl of noodle soup! It was a good savoury broth, but paled in comparison to the magnificent offerings of T’s TanTan. One big point in its favour was that it was not scorching hot, meaning that we were able to slurp it with (relative) abandon. Usually it’s so hot, we don’t know how the locals can bear the temperatures as they’re slurping it down!

…and Dr HH got the matcha variety. Both were creamy, and pleasantly mildly flavoured. But, oh for a crunchy base! Cheesecakes with soft, soggy base layers are so disappointing, and a good biscuit base is quite elusive in the vegan world (at least in my circle).

Would you have relinquished that mushroom nigiri for your loved one? (I did!) And how outraged would you be if your chips arrived with ketchup already on them?

6 Responses to VeganMoFo 2019: Vegan in Nagoya