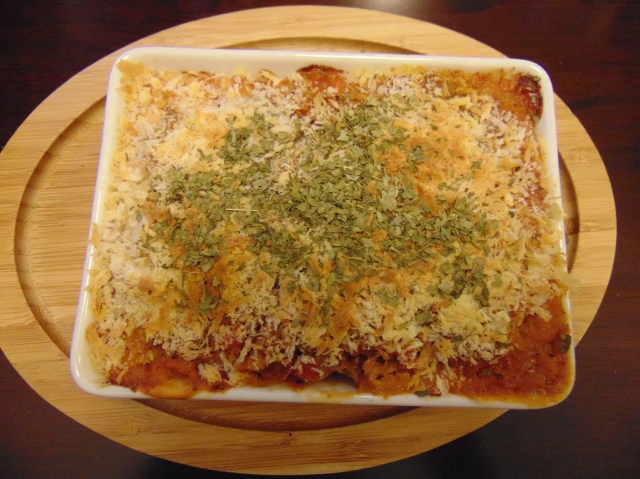 One thing I observed in Japan was that they weren’t always particularly creative at naming things. Pretty much every Indian restaurant we saw was called “Everest” or “Kathmandu” (not sure if we can technically blame the Japanese for that one, I suppose…), and it seemed like a lot of the vegan places we went to had the word “veg” in the title. So it was with this place, Veggie Cafe.

It truly was a cafe, quite small and cosy, but it was also almost unbearably hot, with no fan or air con on. It was a one man show, so it’s probably just as well it was so small – if a few tables arrived at the same time, you might have a bit of a wait for your food as he prepared it all himself. 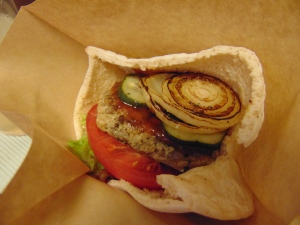 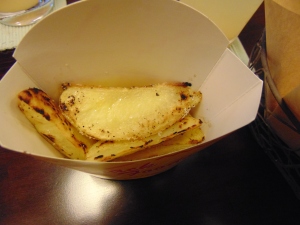 The menu was all western, which is what we were in the mood for on this day. Dr HH ordered the burger this time (usually it seems to be me who’s always ordering burgers!), and it was served in a pita. He chose the “hamburger” on the menu, and deduced that it was actually quite a beany patty (with tofu as well), but it got a bit lost in the accompaniments. All in all, it was nice but unspectacular. He loved the chips though – they were perfect little wedges! 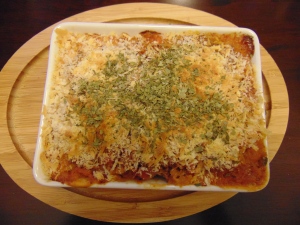 And I got the lasagne, which appeared to be freshly made (or assembled, at least). The ragout was very good indeed, really herby. And as you can see, he didn’t skimp on herbs on the top either, it was very well-seasoned! The tofu cheese was nice and the crumbs on top added some nice texture. My only complaint was that in amongst the traditional vegetables for a lasagne were some Asian leafy greens that I personally didn’t think were a great addition. I’m probably too much of a traditionalist!

For dessert they had cinnamon rolls on the menu, but we managed to turn them down because we had our eyes on another prize just along the road. More on that tomorrow…

What’s the most unorthodox ingredient you’ve encountered in a vegan lasagne?