Kyoto is definitely the place to go for good vegan ramen – we had two of the best of our holiday there, firstly at Engine Ramen and then here at Le Sel Organic. This place was quite an unexpected find. We were actually en route to another restaurant when Dr HH spotted a “vegan” sign in the window and we dashed in before my hanger could get the better of me!

This place does serve meat, but had one vegan set option. We had to order from a vending machine, but of course we couldn’t operate it ourselves! It was quite a fancy looking place, compared to most of our more casual holiday eateries, but it was also quite relaxed. I mean, how fancy can a place be if it has a vending machine?! There were only six seats, all set up facing the kitchen so you could watch the solo chef preparing your food. And what a feast he made!

If only we’d taken a close up of this little appetiser! It’s hard to get any real sense of it from this distance, but it was seared courgette, caramelised onion puree, and shaved walnuts. It was a flavour sensation! 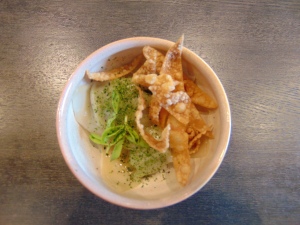 Next up was this exciting concoction! We got three broccoli ravioli, which were topped with broccoli powder (who even knew that was a thing?!) and some fried, crispy triangles. The texture was great, and the broccoli flavour was really intense, which can only be a good thing in my book.

The next course was a bit more boring, as you can see. But before you dismiss it as just rice and veg, note that the rice was tea-infused (nice and subtle), and the pickled Japanese vegetables (the chef didn’t know the English name and we couldn’t place it) were amazing.

And here’s that ramen I was talking about! It was just magnificent. It was a really hearty bowl, with plenty of noodles and a relatively thick broth. The flavour was coming from the earthy broth and the delicious charred cabbage on top. It would almost be worth the cost of flying back to Japan just to have this again! 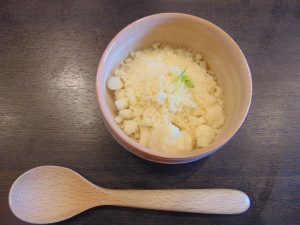 After all of that, we had high hopes for dessert. Alas, this was the only disappointment of the meal. There was a layer of caramel sauce at the bottom, topped with orange shaved ice. The sauce was lovely and sweet, but the orange was insanely bitter. I’m not sure if that’s a typical Japanese orange or if we got a bad one, but it was not pleasant at all, and there wasn’t enough sauce to balance it out.

We can allow them one misstep though, when everything else was so good! It was all wonderfully flavoured, beautifully presented, and dutifully explained in English!

What’s the word dessert you’ve been served? And did everyone know about broccoli powder besides me?