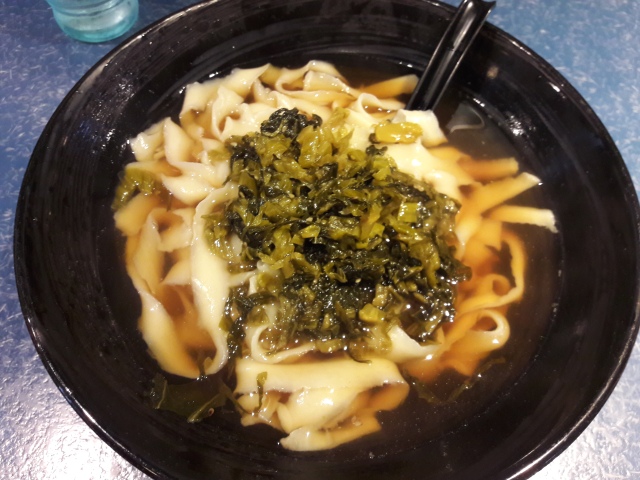 It’s no secret that I’m a big fan of Happy Cow, and we relied heavily on the app for nearby vegan options while we were in Japan. Opening hours were quite strange and unpredictable, cities were huge, and we didn’t always know where we’d be when hunger struck, so the Happy Cow app was a lifesaver. And there were times when the eateries we visited had no vegan options labelled, so we were relying on the reviews of other users to specify which dishes were safe for us. 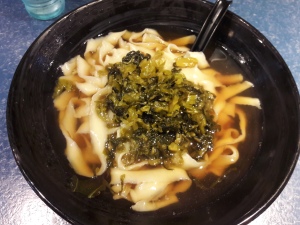 Such was the situation at Yunri (as it was called on Happy Cow; the sign on the building actually said Unryu), a small Chinese place with no English menu. Other Happy Cow users had identified #6 and #12 as vegan, so we pointed at them on the picture menu and hoped for the best. (It’s absolutely not a tourist or trendy spot, so be prepared for a bit of hustle and bustle if you go in).

Above is the #6: big, delicious, flat noodles topped with greens in a solid but simple savoury broth – it didn’t have the depth of flavour of the excellent ramen dishes we’d tried, but it was good. In this case, the noodles were the real star of the show, they were amazing! Also amazing? The portion size! No complaints from me!

Dr HH went for the #12, which had the same noodles in a very spicy sauce. He enjoyed how spicy it was, but lamented the fact that there wasn’t much else going on. Still, we were largely satisfied customers.

Despite the gigantic portions, we still had room in our dessert bellies. Luckily, Cafe Atl was just a few minutes away. It was a pleasant, laid back little place that had a few lunch sets as well, but we only had eyes for the cake. They had five different raw vegan cake options. Dr HH tried white chocolate and raisin, which I thought quite a bold choice – vegan white chocolate isn’t always great (Vego notwithstanding, obviously). He declared this pleasantly sweet and creamy, but not very strongly flavoured.

While they were both good and we liked the calm, clean surroundings, it’s worth noting that these two tiny pieces of cake with one cup of coffee cost the same amount as our massive lunch. You pay for them to put the word “vegan” on the menu, I suppose!

Do you also get overcharged for vegan cake in your neck of the woods?