Our main motivation for visiting Koyasan was to stay at one of the Buddhist monasteries and enjoy a massive feast! This was another example of traditional Japanese accommodation, but it was known as a shukubo, not a ryokan. It had the same set up as the ryokan in Hakone though: simple room, beds made up on the floor, meals served in the room, communal baths. However, all the staff there were monks, and they did not wait on us quite so much (thankfully!).

There are a lot of these monastery accommodations in Koyasan and we weren’t sure how to choose between them initially. Casual research suggests that all of them serve vegan food, but a closer look revealed that a lot still use fish sauce. I managed to establish that Eko-in is actually all vegan, so that was the one for us! By coincidence, it turned out to be the exact same place that a friend of mine stayed at ten years ago. He hated his experience then, saying the monks were quite surly, nobody spoke English, and they were forced to participate in the morning religious ceremonies. Things have clearly changed in ten years: the monks were all very young (students at the nearby university), friendly, and spoke excellent English, and they were quite relaxed about participation in the ceremonies – we essentially managed to slink off when we wanted out. (For the record, I hated being a tourist in someone else’s religion, and would definitely not do this again.) 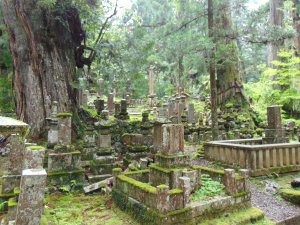 Like the accommodation in Hakone, it was also in beautiful surroundings. High up in the mountains, Koyasan was a beautiful place. We especially enjoyed the walk through the nearby cemetery, made extra special by the the mist and damp in the air – it was peaceful, and a little spooky. Lots of walking around the little town left us ready for a big feast, and that’s exactly what we got!

Unlike in Hakone, this time we got all our food served to us at the start so we could sit and eat undisturbed and then just call front desk when we were ready for them to clear it away and make the beds. Perfect! After setting out all our trays, the monk who served us announced, “Let me explain the meal for you. This pot has hot tea. This dish has rice.” And off he went! Those are the two things I’m quite confident I could have worked out for myself! Everything else remained a mystery.

It’s hard to say exactly what each dish was…but at least I recognised this one as tempura! It was really good, and I liked the little cake-case of some kind of green salt. It’s just a shame these were already tepid by the time they were served, but I think this is the problem of serving a multi-course feast to every guest at the same time. Also on this tray we had a really flavoursome soup, some wilted greens, a plate of pickles, and a little block of sesame tofu. This was one of the best things we ate in Japan, it was so creamy it was just like if you’d blitzed together some silken tofu with some tahini. Incredible! 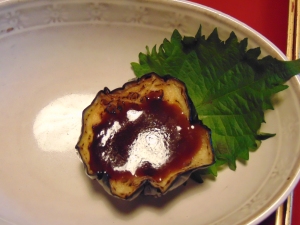 This tray was where the lines between sweet and savoury began to blur somewhat! The aubergine was well cooked and served with a sticky, tasty sauce. Everything on the white plate at the back tasted quite neutral: there was some extremely bland seaweed, a pickled pink flower, and four flavourless gelatinous shapes. We weren’t really sure what was going on. The dish in the front left was more baffling still – we could best describe it as some kind of sweet, fig-type fruit in pink syrup with some gelatinous shapes. It felt quite otherworldly. Also there was a fruit plate, which was unexciting but at least I knew what to expect from it! 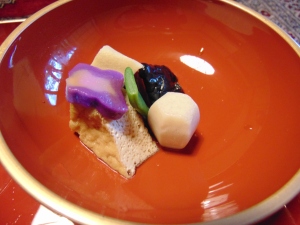 And the final tray had some weird concoctions too! We got a good spongy piece of tofu, which was really nice. Then there was this pink, gelatinous noodle cube, which looked sweet but wasn’t. It seemed to be tea-soaked. It was nice, but a bit weird! And then we had a strange mixed plate containing very sharp pickles, a sweet potato slice, some black beans, a sticky mochi wrapped in a leaf, and some kind of fruit that tasted just like Bakewell tart but we both agreed wasn’t actually a cherry. Very mysterious!

It was a really fun meal, though I would have preferred a bit more info so I could make a logical progression from savoury to sweet. Dr HH and I would take turns sampling each dish and ask each other after the first bite: “Is it sweet or savoury?”, to which the other would usually reply: “Somehow both…” It was fun having lots of little things to peck at, and that sesame tofu will stay with me forever.

We were up at the crack of dawn to observe the chanting and then the fire ritual, and returned to find breakfast in our room and our beds made up. It was a much smaller meal than the night before, which was probably just as well – I was still fairly full! 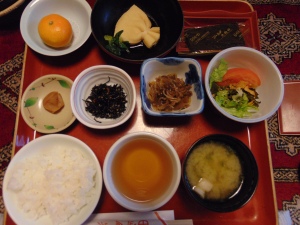 For breakfast we had some more rice and hot tea (of course!), a really good miso soup, a little pot of salad that appeared to contain cornflakes (?!), some nori sheets, some tasty brown noodles with mushrooms, an excellent pot of seaweed and sesame seeds (simple but extremely effective!), an absolutely disgusting pickled plum (I hate pickles, so that didn’t really help), an orange, and a lovely little tofu pouch filled with something that was either sweet or neutral, we just couldn’t understand anything any more! Again, it was a fun meal, and filled us up nicely for our journey back down the mountain.

I would really recommend staying at Eko-in. It was such a beautiful place and we felt really well looked after. There were a few weird details – we had to leave our shoes on shelves at the entrance where anyone could have taken them; the door could lock from the inside but not from the outside, so we locked up our valuables in the safe, but anyone could have gone through the rest of our stuff if they so desired. But for one night, for a special experience, I was really happy. I’d go back again, but skip the early morning religious ceremonies, and just have a lie in instead!

Is cornflakes in salad a phenomenon that has passed us by? Would you like to stay in this place?