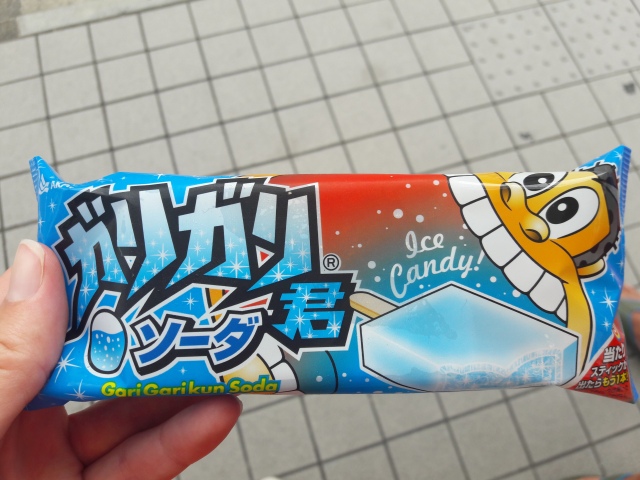 Usually I do all my holidaying in Europe, which means there’s a pretty good chance that I recognise the vegan snacks available, or have enough of an idea about the language to scan for allergens. Japan was a whole different story: there were no English ingredients, and all of the products were completely unfamiliar to me. Fortunately, there is a hardworking network of vegans in Japan doing all the research for tourists like me and cataloguing all the vegan options available in the main convenience store chains: 7-11, Family Mart, and Lawson. We saved this blog post and scrolled through it whenever we entered one of the shops so we could find a suitable snack.

WARNING! Do not, under any circumstances, buy these! All of the Soyjoy Crispy bars are vegan, but they are absolutely disgusting. The banana ones almost made me throw up, they were so strongly (and artificially) flavoured. We bought these early on, learned our lesson, and avoided them like the plague afterwards.

These were much more like it! This is essentially some kind of puffed rice bar, coated in chocolate. Because it contains cereal, we had them for breakfast pretty much every day…they are largely chocolate though. These were my favourite snack we discovered in Japan, and I was devastated to eat the last of the stash I brought home with me.

These Morinaga biscuits were also a good breakfast option, and were readily available at all the convenience stores. There were six crunchy little biscuits in each packet, making them ideal for sharing. The nutty ones were a bit savoury, but the berry ones were better, and the chocolate ones truly excellent! 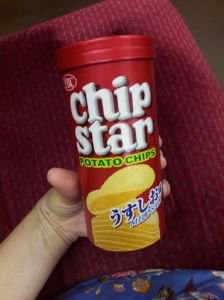 For salty snacks, we were well-served by Chip Star. These were Pringles-esque (though the outer tube was just cardboard and they were wrapped in plastic packaging inside). The red ones were good and salty; the nori ones were amazing! 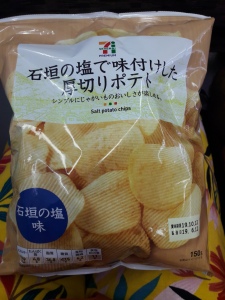 We also enjoyed Family Mart’s seaweed crisps, and the 7-11 salted ones. We played it quite safe on the crisps front.

These were a bolder move! These crackers with “happy seasoning” were some weird sweet/savoury hybrid, and they were very moreish. I brought a packet back to the office, and they were a big hit! It’s a shame that each cracker was individually wrapped in plastic though.

Pickled plums are ubiquitous in Japan, but as I’m not a fan of pickles, I steered clear. Dr HH gave this rice ball with pickled plum a whirl though, and found it quite pleasant. It was nice to have a more substantial snack. 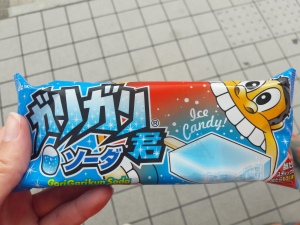 And look at this fun treat! After we went to the Inari temple in Kyoto we were dripping with sweat and in desperate need of refreshment. We found these ice lollies in the first convenience store we stumbled into. It was very much “blue” flavour, but all we cared about was that it was cold: it definitely did the job!

Besides the Soyjoy disaster, we were pretty pleased with the snacks we found – and extremely grateful to the vegans who came before us and did all the hard work!

Have you ever tried a Soyjoy Crispy (and lived to tell the tale)? Which Japanese snack would you most like to try?