Okonomiyaki is one of the Japanese specialities that we’d suspected would pass us by, due to the fact that it’s a pancake and unlikely to be veganised. Dr HH was excited to try it while we were in Osaka, but was a bit unimpressed with the results. So when we saw a restaurant listed on Happy Cow that specialised in okonomiyaki, it seemed like the perfect opportunity to give it another chance.

This was a small, very local spot (we were the only tourists), but it had an English menu with the encouraging words: “No meat, no eggs, no problem!” I had a little card with me explaining in Japanese what we do and do not eat – I showed it to the chef and he enthusiastically pointed out which dishes we could have: fresh tofu (not fried), and the pancake with vegetables with either soba or udon noodles.

We sat at a bar around the kitchen area, and the food was cooked on the hot, metal surface right in front of us, which was very dramatic and exciting! Our dishes were cooked on the same surface where the meaty dishes had been cooked moments before, but we saw them give it a good scrub down first so I felt perfectly comfortable with it.

Truthfully, I was quite disappointed to learn that the fried tofu couldn’t be made vegan, but I needn’t have worried – the fresh block was absolutely delicious! The dressing was simple but effective. Honestly, we had some of the all time great tofu while we were in Japan.

And onto the main event! Dr HH ordered the soba version – the noodles on top crisped up beautifully, giving it some nice texture and shape. There was significantly less sauce than he had in Slices, which had to be a good thing too! We ate these dishes straight off the hot surface using a small shovel – we were quite relieved that some locals were served before us so we could imitate them rather than embarrass ourselves by just guessing how to tackle it. 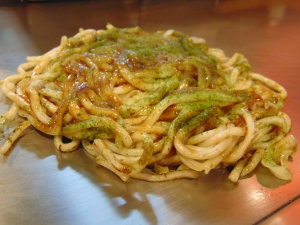 I ordered the udon version, and it pains me to say it but the udon let me down! Udon noodles just weren’t a good match for this dish. They were heavy, wet, and overwhelming, and made the whole thing a bit sloppy and un-pancake-like. It was still tasty of course, but I’d definitely recommend getting the soba version if you visit.

This was one of the more exciting eateries we visited on our trip, and it was an experience we’ll probably never get again! Sometimes trying Japanese food was a little daunting as we didn’t know the correct way to approach a dish and worried about looking foolish, but this was a fun, friendly place and we were happy to get stuck in!

Do you also worry about eating foreign foods in the wrong way and making a fool of yourself? Have you tried okonomiyaki?