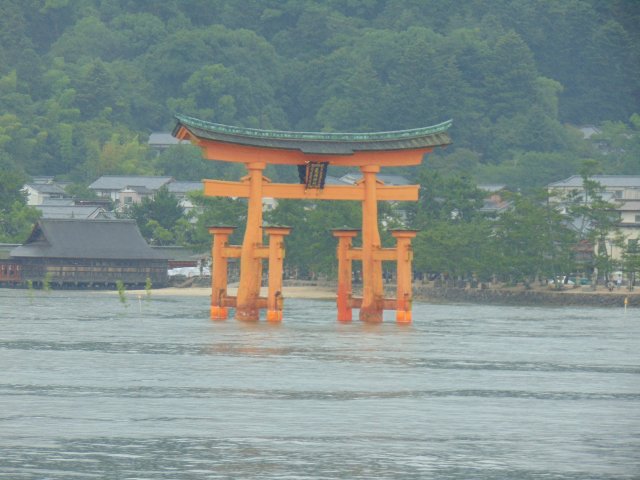 The floating gate at Mijayima ranks quite highly among the top sights in Japan, and we were pleased to see that it was a very manageable day trip from Hiroshima. We took the train and ferry, and there it was in all its majesty! We planned to see it at high tide when it looks like it’s floating. You can make a day of it and wait for low tide to walk out to it, but the weather was so grim that we didn’t bother. 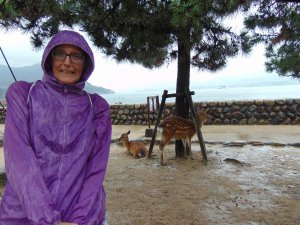 Not only was it raining, but I also met my old nemeses again: the wild deer! Nara revisited, but at least these ones didn’t act quite so much like velociraptors…

The weather was so bad that we decided just to get indoors and eat rather than wander around as we usually would. Once again, we were really relying on other people’s Happy Cow reviews to help us find the vegan dishes. General consensus was that the last page of the menu was all vegan, and some vegan reviewers specifically mentioned the curry udon vegetables, so we followed their lead. It was a good dish for a rainy day! The noodles were lovely and thick and the sauce was rich. The only downside was that the vegetable selection (potato and carrot) was a bit boring and didn’t do much to liven it up. Still, it was hearty and filling, and got us out of the rain for a bit!

Have you ever been rained out on a big sightseeing day? Did you also recover with a hearty bowl of noodle soup?