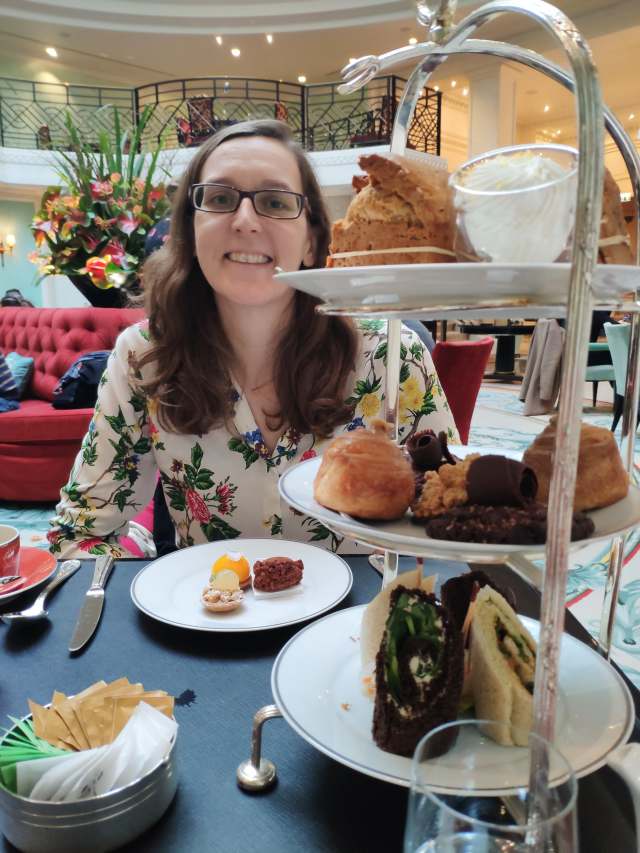 It’s been so long since the Brexit vote that I’d been managing to trick myself into thinking our official departure might never happen. Last Spring I had to start facing reality and getting my paperwork in order to try and make it easier for me to stay living in the Czech Republic post-Brexit, but even then it didn’t quite seem real (not helped by the fact that nobody actually knows what it’s going to mean in the long term for UK citizens in the EU). But alas, it’s happened. Dr HH and I made the most of our last weekend as EU citizens by hopping over to Paris for a final hurrah.

Regular readers will know that there are few things I love more than afternoon tea. Living in mainland Europe, they are few are far between. We had a delicious one in Amsterdam a few years ago, but that was it until this trip to Paris.

We were celebrating a birthday and an anniversary, and I’d been looking for an excuse to return to Paris especially for this vegan afternoon tea. The Shangri-La Hotel has been serving a vegan variation on afternoon tea in its La Bauhinia restaurant for a couple of years, and when I was booking it they informed me that it’s actually coming to the end of its run in February – so our trip was just in the nick of time!

I’m extra glad we managed to sneak it in, because it was quite the feast. The restaurant itself was simple and classy, and not particularly busy on a Saturday afternoon, making it a pleasant and relaxing atmosphere. There was even a pianist for background noise – very classy indeed! 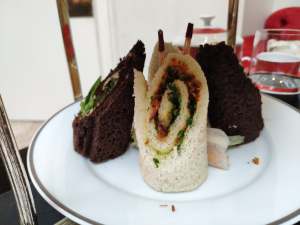 The savoury plate was not particularly ambitious, more’s the pity, but if there has to be one boring plate I’d rather it was the savouries than the sweets. The dark bread was a cream cheese and spinach sandwich, while the white was roasted vegetables. These was also a fresh summer roll with tofu hiding in the middle of the plate. They were all tasty (the cream cheese was especially good), but it would have been nice to see some pastry or something a bit fancier in there.

The scones were more impressive – just look at them! We had a plain and a fruit one, which was more than we really needed, served with cream and pear jam. The scones were had a really good bake on them and a lovely crusty top. The cream was nice but a touch greasy I thought, and I hate pear so I wish they’d served a more traditional jam, but Dr HH was a fan.

And then we had not one but two sweet plates! This one wasn’t even on the stand, it was served to us separately. You have to love an afternoon tea that can’t be restricted to three tiers. These are the fancy looking desserts of my dreams, and they didn’t disappoint. The chocolate one was sublime, with a very intense chocolatey flavour and a delicious crumb on top which contrasted nicely with the sponge inside. The passion fruit mousse was a welcome refresher after that, sitting on a beautifully crunchy base. And in the background was a small biscuity tart filled with cream and topped with pear (pear again!), which was the perfect combination of textures – and taste, once that cursed pear had been scraped off mine. These morsels were the perfect size for afternoon tea…

…unlike these ones, which were just a bit too much on top of everything else! The chocolate cookie was, again, really chocolatey, with a nice hit of salted caramel. I loved the texture of the cookie, but Dr HH found it a bit too soft. We were told the pastry was filled with caramel, but Dr HH declared it to be more like some kind of nut butter (I was too full and couldn’t tackle this one) – he also found it breadier than he’d hoped, which was a shame. And in the middle you can just about see a kind of chocolate disc topped with granola – simple, but somehow probably my favourite element of the whole spread!

All in all, it was fancy, fun, and largely ambitious enough to be a really exciting treat. It was also generous, and we certainly left feeling full and satisfied. It’s a real shame the vegan option is being discontinued, but at least it had a really good run, and we managed to try it just in time. The option of having a British classic like afternoon tea in the French capital was always going to be a welcome treat. Long live UK/EU relations, whatever stupid decisions 52% of my compatriots made!