Friedrichshain was all about one building for us until our last few hours in Berlin.  From Warschauerstrasse station it’s just a short walk to the building that is home to Veganz (a vegan supermarket, bigger and better-stocked than Dr Pogo’s), Goodies (a predominantly vegan cafe and bakery) and Mio Matto (a vegan fine dining restaurant).

Our meal at Mio Matto was the fanciest of our holiday and we were really looking forward to it.  The boasts of a ‘panorama lounge’ proved somewhat groundless, when the promised view was just the balcony doors over the busy road below.  But still, the restaurant was very stylish and had a lovely atmosphere.  There are three menus to choose from:  fresh, regional or creative.  Each menu lists only the key ingredients, rather than telling you what the dish actually is.  Whatever you choose, you get the same amuse bouche of zesty carrot soup.

My beau chose the regional menu and started with this beetroot, apple, almond, fennel and peach concoction.  He enjoyed the individual components but didn’t really feel like it all came together as a complete dish.

His soup should have been this garlic one, but our dishes got switched around and we hadn’t been keeping track, so I had this one.  The garlic came through really strongly, which I liked, and the deep-fried shrimp balancing on the crouton there was a very welcome addition. 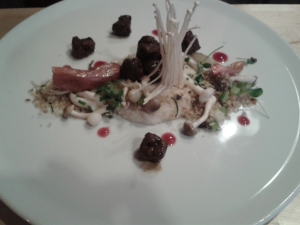 Unfortunately he was also pretty underwhelmed by the ragout main, which was let down by the chunks of mock meat – they were a bit too chewy and tasteless.

Dessert, happily, was a winner in his eyes:  chocolatey and delicious, and all working together beautifully.  I had been deterred from this one by the pear listed in the ingredients, but I overcame my hatred to try a little and it really was good.

I opted for the creative menu, which kicked off in style with this plate of sushi:  colourful, fresh, tasty. 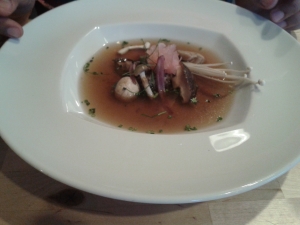 For the soup I should have had this one before our mix up.  The mushrooms were brought out dry, and a pot of tea was poured in to serve.  It was quite autumnal and meaty.

I really enjoyed my main, which was a pumpkin and coconut curry with deep fried balls of normal and black quinoa for texture.  I comfortably won that round. 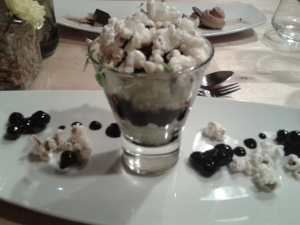 Dessert, however, was a bit flat, mostly because I always choke on popcorn and so derive no pleasure from eating it, but also because I don’t technically classify something as a dessert if it contains neither chocolate nor cream.  Actually the blueberry layers in the glass were quite tasty and refreshing, but it wasn’t quite what I was after.  Overall we enjoyed and appreciated the experience in Mio Matto – it’s great that there are restaurants doing this fine dining for us.  However, the food itself didn’t quite live up to the presentation.  I’d happily go again, but it wasn’t the best food of the trip, even if it was the most expensive meal.

Downstairs we spent a fair amount of time browsing the supermarket shelves and stocking up on rice milk chocolate (the ultimate vegan chocolate), and also sampled a few of the goods from Goodies.  On our first visit I tried the sweet potato BBQ bagel, which sounded really tasty but was alas lacking in the BBQ department.  My beau definitely won that round with his beet falafel.  Happily, we both struck gold when we split this beautifully rich chocolate and walnut cake. 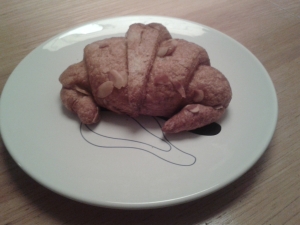 We went back a couple of times for takeaway treats, including a breakfast of cinnamon roll and croissant (the chocolate was not all oozing and nutty like at Dr Pogo, but it was still decent).

And to fuel us at the airport on our journey to Copenhagen we got this gorgeous vegetable rosti and interesting China roll – a breadcrumbed spring roll.  It made for a satisfying and affordable meal on the go.

That was definitely enough to fuel us because we’d already got bellies full of cake following a mid-afternoon trip to the pretty, pink, Parisien patisserie place, Oh La La.  This cafe is 100% vegan and has a good crepe menu, but we just split two heavenly cakes.

First was the chocolate pyramid, which was just like a Snickers bar with its nuts and caramel.  After completing it, I told my beau the next one couldn’t possibly be as good.  I was wrong. 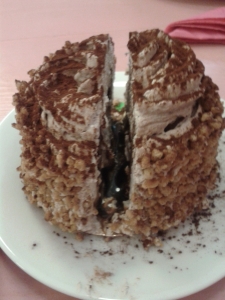 It had an oozing centre of chocolate sauce and vertical lines of thick chocolate amongst the mousse, and a delicious nutty coating.  It was absolutely sensational, and a fitting farewell to Germany, one of the most vegan friendly places imaginable.

2 Responses to Vegan in Berlin: Friedrichshain