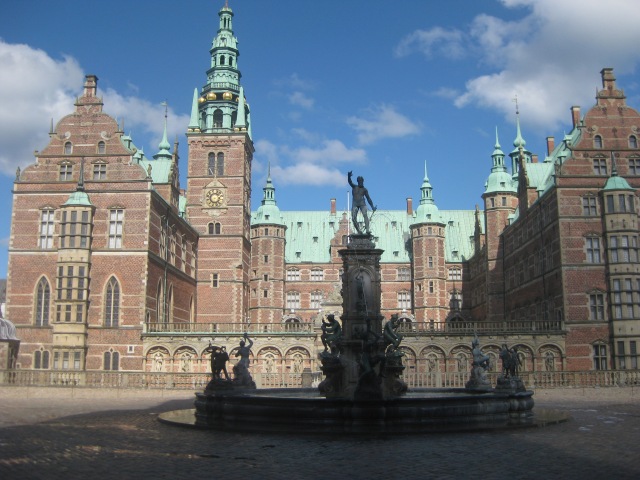 What a spectacular castle!  We visited it on our last day in Copenhagen, which was the only day we actually enjoyed there.  Oh, I hated Copenhagen, almost from the moment we arrived.  I was going to give a long rant about everything that went wrong, but I think this poem sums it up nicely, composed during one of our many wasted hours at the train station (my beau contributed a couple of rhyming words and insists on a co-author credit):

Why is Copenhagen so rubbish?

It could be because of the rain.

Why is Copenhagen so rubbish?

I think it’s because of the trains.

Trains disappear from the screens

And are cancelled without prior warning,

You can begin your journey at noon

And be in the same place the next morning.

The ticket machines are so stupid,

They won’t let you pay with notes,

Staff refuse to give a straight answer,

It would be quicker to travel in boats.

Building an ark is the best plan,

For when it rains, it pours and it floods,

The skies are constantly gloomy and grey,

In fairness, there were some impressive castles both in the city and within day-tripping distance, and we went to a brilliant, free art museum and really enjoyed our guided tour of the city.  But the weather and the transport made it into a headache of a destination and for my own sanity I think it best never to go back.  When our train out of the city was cancelled as well and we could have been forced to stay longer than planned, that was probably the lowest point in my life. 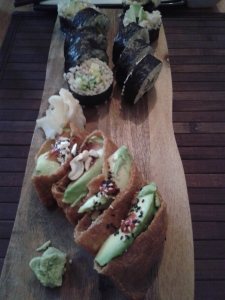 But the company was excellent, as was the food.  On our first full day, after being on our feet all day and trudging around in the rain, we cheered ourselves up with a sushi feast at Green Sushi.  It was pricey (everything in Scandinavia is), but very good quality food.  Vegan options are clearly marked on the menu, and we went for the 14 piece vegan set menu.  Everything was tasty, but the nigiri pieces closest to the camera were simply divine.  I was quite tempted to go back for more, but in the holiday spirit we did a bit more exploring.

Sticking to the idea of nibbles, we went to Simple Raw and had one of their raw tapas plates.  I was unsure what to expect from it:  I’ve had a few raw cakes (including the most amazing raw brownie at Levenshulme Market a couple of weeks ago, for anyone Manchester based), but not much savoury.  My conclusion was that the raw tapas were very fresh and flavoursome…but the falafel and patties would have been better warm.  The salads were fantastic, and the hummus and crackers were both good.  I would definitely recommend it even to fellow raw-sceptics like me.

As tradition dictates, I had no qualms about the raw desserts:  we shared the triple chocolate cake and chocolate fudge cake.  They were both intensely chocolatey and delicious, and we hadn’t even told them we were sharing yet they came in two conveniently small slices.  Perfect! 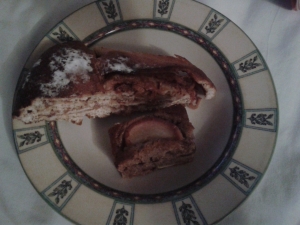 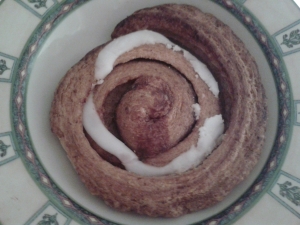 For our breakfasts we decided we had to honour the noble tradition of Danish pastries, and helped ourselves to lots of Naturbageriet treats.  On our first day we arrived at this little bakery too late to have our choice of the baked goods, but the banana/apple cake was nice and moist and the cinnamon bread was so nicely spiced, they made for an unusual but tasty start to the day.  The next day we had chocolate croissant, which had a delightfully thick line of chocolate on the outside as well as a gooey centre – still not as good as Dr Pogo, though.  And finally, a good old cinnamon whirl, which was a bit dry but still tasty.

There were a decent number of vegan options in Copenhagen, though not as much choice as in Berlin, nor as much affordable food.  However, the food was probably the only thing I didn’t complain about in Copenhagen, so we’ll call it a victory!  Maybe I would risk a return visit for some more of that sushi…

This entry was posted in Travel and tagged vegan Copenhagen, vegan travel. Bookmark the permalink.

2 Responses to Vegan in Copenhagen