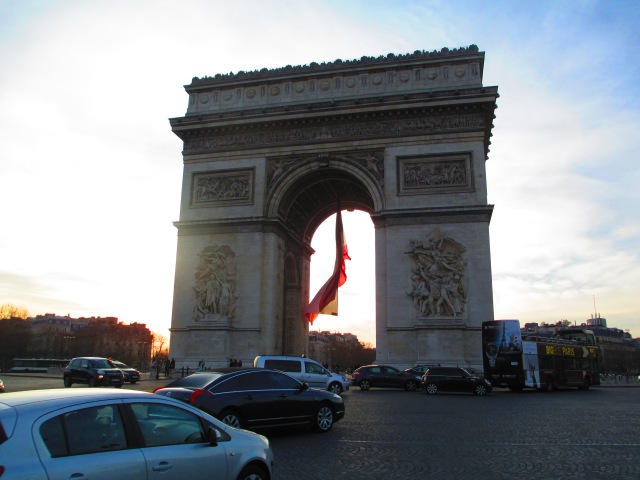 I truly had an amazing time in Paris, and enjoyed everything from the sights to the food  We finished our little break there with some fine dining…and of course, some falafel, that vegan staple.

One of the places I was most looking forward to in Paris was L’as du Fallafel, as I had seen pictures of falafel wraps the size of my head.  In Manchester we’re fortunate enough to have Go Falafel, home of the best falafel imaginable.  I had the impression that this one could be a strong rival, perhaps even winning on size alone.  Alas, it was not to be:  it’s a Jewish place, and we arrived during Passover, which meant there was no bread to be had.  Noooooo!  It was quite a bold move on their part, I thought, as most of their neighbouring rivals, also part of the Jewish neighbourhood, were still serving bread, but bravo for sticking to their principles, I suppose.  I just really, really wanted that falafel wrap.  We had to make do with the falafel plate instead, which we shared.  It was served with two gigantic dry crackers, which I wouldn’t stoop to photograph.  You all know the difference between a cracker and a wrap.

I mean, the food was good.  The falafel balls were tasty (though a bit small, and not as good as Go Falafel), and were accompanied by hummus, tahini and salad.  It was nice, but it was all crying out to be wrapped in some bread!  It was 18 euros for this plate, and we weren’t full afterwards so we paid 5 euros more for a portion of ten falafels with tahini. 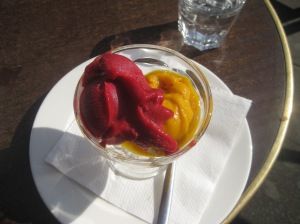 To recover from that disappointment, we went back to the tourist drag to find some coffee (for my beau) and some sorbet (for me).  We went to Berthillon, just along the way from Notre Dame, and grabbed a table in the sun for some over-priced refreshments.  The waiter told me that all the sorbets were vegan, so we had a scoop each of raspberry and mango (there were about six flavours in total).  They were as good as they looked, those vibrant colours matched by strong fruity flavours, perfect for sitting by the river and watching the tourists go by.  This set us back 9 euros, but we needed a little something. 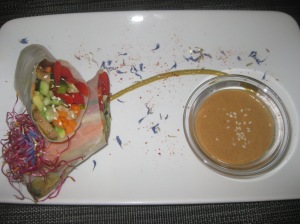 And it wasn’t long before we were eating again, this time at Gentle Gourmet Cafe which had been at the top of my hit list:  a chance for some French fine dining.  It’s right on the river and, despite looking fairly unassuming from outside, is really classy and stylish inside, with excellent service, and, thankfully, an English menu (I can muster up a little French, but the descriptions are pretty intricate).  This was our real treat in Pairs, a fancy three course meal.  We kicked off in style with some Vietnamese fresh spring rolls.  And what a start it was!  They were colourful and fresh, filled with seitan and vegetables and garnished with hot pink sprouts.  They were accompanied by a good peanutty sauce as well.  Our enjoyment of these may have been heightened by the sight of our neighbour attempting to eat them with a knife and fork – there’s no need to be that fancy!

Next up, I ordered the excitingly named ‘Milan in Spring’:  mushroom tagliatelle with mangetout and hazelnut seitan cutlets.  The cutlets were delicious, and every component was very tasty.  While I enjoyed it, I’m not sure it would be to everyone’s taste – it was quite dry (the less sauce the better for me, but it has been brought to my attention that other people feel differently). 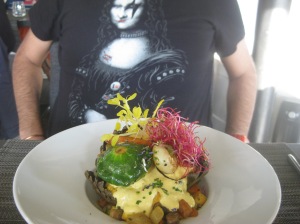 My fellow went bold this time and ordered the stuffed artichoke.  Ultimately, he was a bit disappointed by it – although it looked spectacular, he feels that there should be nothing inedible on a plate, and a stuffed aubergine would have been better.  While the vegetables and tofu were tasty, he found the sauce a bit bland and found it a struggle to get the tasty bits of artichoke out.  On the plus side, we got a complementary basket of bread to help us along.  (Enjoy the bonus glimpse of the T-shirt he wore to the Louvre.) 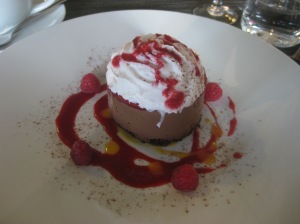 Throughout the day I kept telling Mr HH how much I was hoping for a rich, chocolatey, creamy dessert.  And look what I got!  This chocolate Bavarian was every bit as good as it looked.  There was a fruity raspberry coulis, delicious whipped cream, tasty chocolate sponge at the bottom, and the real star of the show:  the moussey layer.  Good lord! 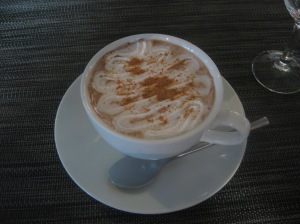 We decided to wrap it up properly and get a hot drink as well.  There were three different kinds of hot chocolate, and I ordered the one with pepper and cinnamon.  It sounded spicy and exciting…but actually it was a little dull – lukewarm, and I couldn’t taste the seasoning.  Still, the meal was a total feast and I can’t recommend it highly enough if you want a holiday treat. 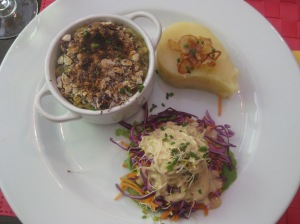 Almost as fancy was Le Potager du Marais, which we could only squeeze in on Thursday afternoon very quickly before hopping on our train to Amsterdam (you really have to check opening times in Paris, most places are only open three days of the week between 2:32 and 4:19, or something equally ridiculous).  As we were against the clock, we’d booked a table for 12pm.  We arrived on the dot, but the waitress was still setting up and spent a good 10 minutes doing so before coming to serve us.  The starters looked tempting, but we simply didn’t have time.  Going straight for the mains, I ordered the cassoulet de la mer, a delicious combination of lentils, smoked tofu, seaweed and hazelnuts.  It had a good salty taste of the sea, and was served with a nice salad and mash (you can choose if you want mash or rice).

There was an ‘aubergine surprise’ on the menu, and my fellow simply had to choose that.  It turned out to be everything he’d wanted in his stuffed artichoke the night before:  sun-dried tomatoes, pesto and fake-cheese wrapped up in aubergine.  Better even than the taste was the fact that when the waitress delivered it, she declared brightly:  “Surprise!”

There were two traditional French desserts on the menu, and I couldn’t resist the opportunity to try them (don’t worry, we didn’t miss our train in the end).  We shared a tarte tatin, which was beautifully caramelised, sticky, sweet and warm, and a creme brulee, which I’d expected to be ramekin-sized, but came in this huge dish.  The top was perfectly caramelised, but beneath the surface the tofu mixture was an unappetising shade of green.  We were right not to be deterred though, for the texture was just right and the taste was sublime, full of ginger.

Yet again, this place really filled up over lunchtime so booking is probably a good idea.  We were delighted that both this place and Gentle Gourmet were all vegan – it’s lovely to see places that really strive to impress with their menus.  Bellies full of food, and a few French classics ticked off, we were ready to bid a sad “Au revoir” to Paris and embark on the next leg of the journey:  to Amsterdam!