For vegans, it’s very easy to get sick of falafel, hummus, and chips. They seem to be the default options on many an uninspired menu, and every takeaway cafe in the UK seems to have a standard dry, chewy falafel wrap or sandwich on the menu. But still – is it possible to get sick of proper falafel? I mean fresh falafel cooked by someone who knows what they’re doing.

Deep fried, crispy, flavoursome falafel with smooth hummus is still one of my favourite meals – and if there are chips on the side, so much the better. For this dish alone, I might have to consider Middle Eastern cuisine amongst my favourites. (I couldn’t find any consensus on where exactly falafel originated, so I’ve stuck with a broad Middle Eastern label.)

I have had some top notch falafel in my time – most notably from Go Falafel in Manchester, and with honourable mentions to Dr Falafel in Vienna, Hummus Bar in Hungary, and L’as du Falafel in Paris. The Czech Republic is notoriously resistant to immigration, and as such there isn’t really a thriving falafel scene here (I genuinely believe that falafel is one of the greatest pro-immigration arguments – it’s right up there with human decency as one of the reasons we should welcome people in). So I was delighted when Paprika opened up in 2017.

It’s a teeny place with some indoor seating, but it’s probably better suited to takeaway, as it’s always jumping. They serve meat, but also have some great vegan options, including shawarma along with the standard falafel and hummus dishes.

Dr HH and I love to share the vegan plate. It consists of hummus, shawarma, tahini, fries, bread, falafel, and salad. The shawarma has a great texture, and is really well seasoned – the best vegan shawarma in Prague by a mile. And the falafel, chips, and hummus are all absolute perfection (in fact, the chips are also the best in Prague).

Oh, and did I mention the bread? It’s so soft and pillowy – sheer perfection! 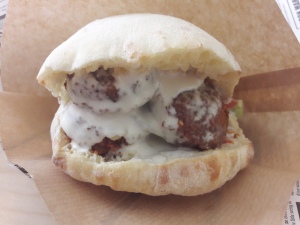 On less indulgent days, I’ve also been known to simply grab a falafel pita. Again, it’s hard to go wrong with this.

One of my most used phrases in this VeganMoFo is probably going to be: “I know chips don’t really belong to X cuisine, but still…” I mean, look at those chips. Beautiful!

VeganMoFo friends, do you ever suffer from falafel fatigue? And where’s your number one falafel spot?