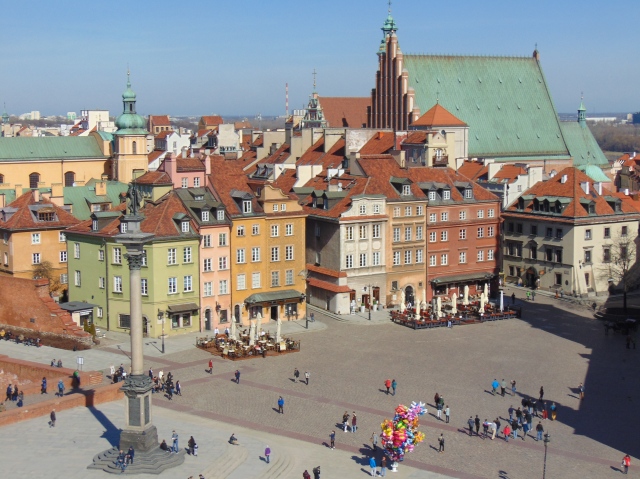 Warsaw was off to a good start – could it continue?  In a word, yes.  And it turned out to be pretty good on the breakfast front, too. 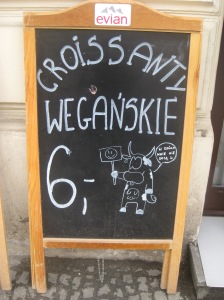 One day while we were walking around, Dr HH excitedly pointed this out to me.  This is the kind of sign that makes my day.  So we picked up a vegan croissant from Petit Appetit (a cafe/bakery) and ate it the next morning with some of the Veganz chocolate spread we had brought with us for breakfasts (chocolate for breakfast is practically the law when you’re on holiday, right?).

It was lovely, of course!  Good and flaky, though not as buttery and luxurious as non-vegan croissants.  I still think that 8th Day in Manchester does the best vegan croissants, but this was a good one too. 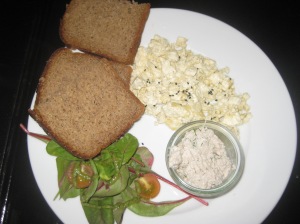 On Sunday morning we went for breakfast at Nancy Lee, a veggie cafe.  It is a blues/rock cafe which is a little cramped downstairs, but also has upstairs seating.  There’s no English menu, but the staff explained the options to us.  There were two vegan options:  the vegan breakfast plate and the vegan omelette.  I got the breakfast plate, which consisted of tofu scramble, pate, bread and salad.  Everything was nicely seasoned and tasty, but it wasn’t spectacular like the omelette, which was cheaper:

Doesn’t that look impressive?  Dr HH reported that it was good and crispy outside, with some sundried tomatoes inside giving it real depth of flavour.  Also, it was massive.  It was topped with rocket, cherry tomatoes and avocado, and we all know that anything with avocado is a winner.  Even though I made the wrong choice with breakfast dishes, I would recommend this place for a visit.  They also serve lunch, and I was eyeing up a tasty vegan chocolate cake on the counter, though it was a little early even for me to have cake.

After a day on the go, we refuelled at Momencik that evening.  It’s a small place that serves nachos, tacos and burritos and is run by a friendly Spanish guy.  Unfortunately we were there on the day of the Warsaw marathon and a lot of people had stopped by to get a fix after the race (good work, vegan runners!), so they were a little low on supplies.  Still, we had a real feast.  We shared the guacamole nachos between three of us for a starter.  It’s a shame the cheese didn’t melt, but it was really delicious and there was a perfect amount of topping.

Then came the burritos.  Dr HH and my mum both had the pastor, which was filled with refried beans, brown rice, soy chunks, avocado and vegan mozzarella.  They both loved it, particularly the tofu which was excellently seasoned.  My mum (who is an omnivore) declared:  “It’s the best burrito I’ve ever had!”

I went for the seitan burrito, because I’m addicted to seitan:  it was packed with brown rice, refried beans, seitan chunks, peppers, and some of that mozzarella for an additional fee.  It was really flavoursome.  I think it was my first time having a burrito that had an actual protein/meaty element, rather than just vegetables.  I like having that option. 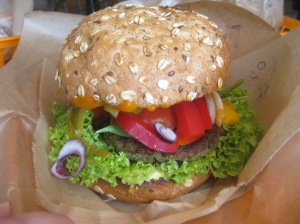 And our last meal in Warsaw was at Mango Vegan Street Food.  It’s a bright, sunny place, yet again with those repurposed crates so popular in the Poland vegan scene, and mostly has burgers and falafel on the menu.  My mum chose the kosmosa burger, which was quinoa with mango chutney and curry.  It was huge!  The curry seasoning was quite mild and didn’t overwhelm the herby quinoa patty.  There were lots of colourful peppers in there, and a good toasted bun.  She said it was one of the best burgers she’d ever had, though she couldn’t finish it – it really was gigantic. 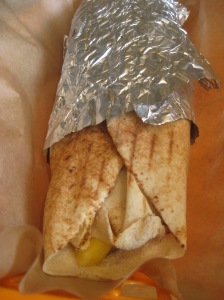 Dr HH and I both ordered falafel wraps.  The avocado and pineapple wrap was reportedly good, though the avocado got a bit lost at the bottom.  Dr HH enjoyed the sweet, sharp explosions of flavour, and the good herby falafel.

I usually don’t like fruit in my savoury dishes, but I decided to trust in the mango theme, and the mango falafel was very good.  The mango chunks weren’t too sweet or plentiful, and they were a nice refreshing touch.

Mango is, unsurprisingly, a key ingredient in this place, and we ordered mango lemonades.  In Poland, as in the Czech Republic, the word ‘lemonade’ generally refers to any soft drink, not usually a fizzy or lemony one.  A lot of establishments offer a homemade lemonade which is generally water with some kind of fruit or ginger/mint in there.  So imagine our surprise and delight when we got essentially a mango smoothie!  Delicious. 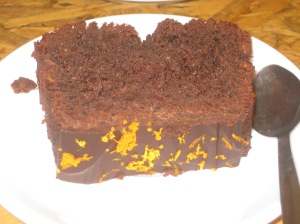 And, as we were trying to fill ourselves up for a three hour train journey to Gdansk, we also had some chocolate orange cake.  It was almost like a brownie, really fudgy in the middle and with a good crust.  It was iced at the top, and was really rich and delicious. 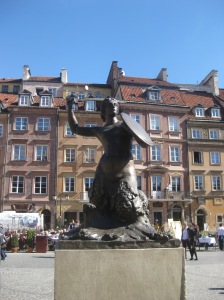 This place was yet another triumph in Warsaw.  Honestly, everything we ate was so delicious.  And despite my initial misgivings that Warsaw wasn’t as pretty as Krakow, it was a great tourist destination.  The Old Town was really beautiful, and we had hours of fun at the Kopernicus Science Museum.

We went on the Alternative Walking Tour of Praga, the “rough” part of Warsaw, and it was really interesting.  At the start, the guide was giving it all that, telling us he was going to take us into dangerous places that most tourists don’t visit, and we were rolling our eyes – but then we did end up in places where I would have felt a bit uncomfortable without a local, so it’s definitely worth a visit.  Praga has quite a few buildings that survived the war, and it was really interesting to see them.  Plus, there was some good street art.

Speaking of getting into dangerous places, Dr HH also found out about an abandoned train station and line that we could explore.  I was fairly anxious about being in a completely isolated, overgrown place, and in my mind I could already read the news reports about my body being discovered there.  Perhaps it would feel different on a bright sunny day.

There was a lot to see and do in Warsaw, and even more to eat.  I would call this the must-visit place for vegans in Poland.  I feel hungry just thinking about it!