It was my birthday at the beginning of April, and my brother gave me Vegan Street Food, which was written by Jakcie Kearney, a former Masterchef contestant who used to run a food truck at a pub in Chorlton (I think I’m right to put that in the past tense).

The book covers a few Asian countries that she visited with her family, and veganises some of the traditional recipes of those countries.  I haven’t made as many recipes as I usually do from my cookbook of the month, which is partly because I was on holiday for over a week at the start of April, and partly because it didn’t excite me as much as I’d expected.

For one thing, there’s a lot of deep-fried stuff in the book, as you’d expect from Asian street food.  I don’t trust my electric hob enough to deep-fry anything on there, so I steered clear of all those recipes, as tempting as they looked.  Also, there wasn’t an abundance of soups or salads that could be easily taken to work for packed lunches without breaking Dr HH’s strict ‘no noodles at work’ rule.  (He has a beard and doesn’t want to embarrass himself in front of his colleagues – it can be messy business.)

And then there were some ingredients that I just wouldn’t know where to find in Prague.  My local supermarket doesn’t even sell chillies, for crying out loud!

But I made a few things, and I liked what I made.

The recipe for these banana pancakes vendor-style was a little perplexing, to say the least.  I understood that the desired effect was a roti stuffed with banana and peanut butter, but how to achieve it?  The instructions were frustratingly vague:  “stretch the dough as thinly as possible while continually smearing the dough with oil.”  What does that mean?  Can you imagine how to do that?  How many hands does it require?

And then:  “cook the pancake on one side (do not cook too much at this stage)” – give it to me in minutes!  I recruited Dr HH for his kneading skills, and relied on my memories of him making Indian flatbreads, and in the end I think I did come up with a decent flatbread.  But it was in no way a pancake.  It was a roti with some gooey banana and peanut butter in the middle.  Obviously it was delicious, but a bit too stressful for me first thing in the morning.

The black curry with beetroot and spinach was visually appealing, as well as delicious!  It wasn’t too spicy, and sprinkling cashews on anything is always a winner for me.

I loved the Hungry Gecko’s dal masala.  The dal itself paled in comparison to the aubergine masala on top.  The aubergine was meant to be cooked in 1.5 cups of oil – I scaled it back to “just” 1 cup, and still felt that was a bit excessive.  But of course, it was delicious.  Delicious!  I also switched from the recommended green pepper to a red, because green peppers simply do not exist at my local supermarket. 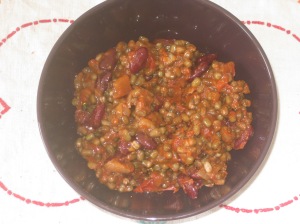 I tweaked the easy makhani dal recipe a wee bit, chucking in a tin of tomatoes rather than the fresh/puree suggestion, and I didn’t serve it with a swirl of cream in the end.  It was tasty, and a bit different from most dal recipes I’ve used before, at least visually.

The marmalade tofu with chilli and cashews was absolutely glorious!  It was so tasty and really easy to make, even after work.  It was sticky, spicy and spectacular.

I made the khao soi noodles (Chiang Mai curry noodles) using shop-bought red curry paste because of a lack of time/ingredients, and my absolute delight at finally finding vegan curry pastes in Prague.  I didn’t deep fry any leftover noodles, and nor could I find any mange tout to add a touch of green, but it was still really delicious.  I used baked tofu instead of jackfruit as well.  It was flavoursome and had a good mix of veg and extras.

I really enjoyed the pad ka prao.  According to the author, European basil leaves won’t cut it with this recipe, but I found it delicious anyway despite my insufficiently exotic herbs.  The aubergine was tender and delicious, and certainly had a kick to it!  I served it with some baked smoked tofu, so I was ready to fend off any “But where do you get your protein?” questions.

The Laos-style roasted pumpkin, coconut and chilli soup was spicy and delicious!  My only complaint is that it was a little too thin, but a bigger butternut squash would tip the scales a bit next time.

Nam rom kho to (mushroom claypot) was one of my default choices when I ate out in Vietnam.  Unsurprisingly, I don’t have a claypot at home, so I just cooked it in a pan.  And it was lovely!  I burned the garlic while I was slicing mushrooms, but it had no detrimental effect on the dish, fortunately.

I don’t usually make sandwiches at home (I like to eat part of a dish separately, and this is impossible with sandwiches), but I make the odd exception.  I couldn’t resist the banh mi buddha recipe.  There were several components:  pickled vegetables, mushroom pate, maple chilli sambal and marinated tofu.  I just don’t have time for all that nonsense, so I only used carrot for my pickled vegetable (and seriously reduced the amount of sugar and rice vinegar in the pan), and skipped the sambal altogether, adding more chilli in the marinade.  The tofu was really tasty, and it made a good, hearty sandwich. 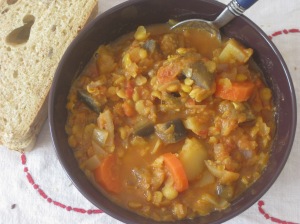 I really enjoyed the roti canai (split pea dal), despite my aversion to split peas.  There were so many good vegetables and spices in here, it was a really hearty meal.  We had this in place of soup for a few packed lunches. 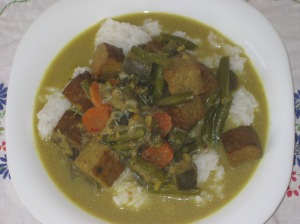 The Hungry Gecko jungle curry was a good green curry.  The baked tempeh chunks were sublime, and there was plenty of veg in there.  I thought it was one of the best dishes of the book, but Dr HH was a bit underwhelmed by it.  Boo, Dr HH! 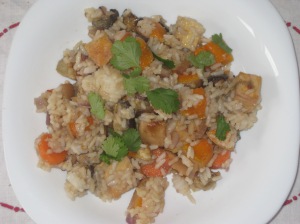 We had opposite views on the nasi goreng as well.  Dr HH loved the good chunks of veg and tofu and thought it was great with a splash of extra sriracha.  I loved the baked tofu, but I didn’t find the butternut squash as exotic as I’d expect this dish to be.  It wasn’t quite what I was expecting.

There are things in here I will definitely make again, partly because I have several gigantic bags of different kinds of dal (there is an extremely well-stocked Indian grocery shop not far from us, which is surprising).  The marmalade tofu has already made another appearance, just because it’s so quick and easy.  And I can see myself experimenting with some of the deep-fried goods once I’m back in the UK with a good old gas cooker.

So this is not an everyday cookbook for me, but it’s one I’ll dip into from time to time.

This entry was posted in Cookbooks and tagged vegan cookbooks, Vegan Street Food. Bookmark the permalink.

7 Responses to Cookbook of the Month: Vegan Street Food