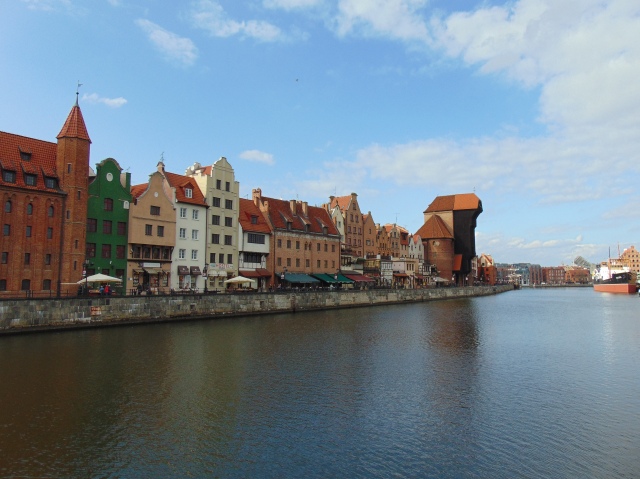 After a wonderful stay in Warsaw, the next stop on our tour of Poland was Gdansk, way up in the north.  We tourist-ed pretty hard in the first week of our trip, but when we arrived in Gdansk we took the foot off the pedal somewhat and enjoyed more leisurely, aimless wandering around – and it’s a very pretty place in which to do that. 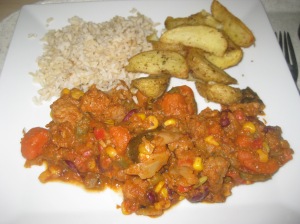 In fact, we were so exhausted from our Warsaw adventure that when we arrived in the evening we couldn’t even muster up the energy for a food exploration.  We stumbled into Bioway, which is just a stone’s throw from the station.  It’s very much a ‘what you see is what you get’ kind of place:  canteen style, quick and convenient.  As long as you’re not expecting the best food of your trip, you’ll be fine here. 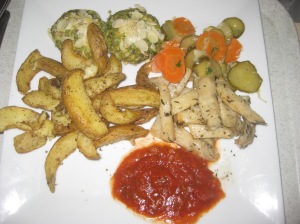 There were menus with pictures showing which options were vegan.  You have to choose your main, which is served to you by the staff at the counter, then pile your plate with as many side as you like for a flat fee.  Vegan options weren’t marked, so I played it safe.  The sides were a little cold, so this was probably a good move anyway.  I enjoyed the soya goulash – it was flavoursome and had really good meaty chunks. Dr HH was really impressed with his broccoli cutlets too – there was some nice soft tofu in there which contrasted nicely with the crunchy almond topping.  We both left satisfied.  It’s not thrilling food, but it’s perfect when you’ve got a bit of holiday fatigue. 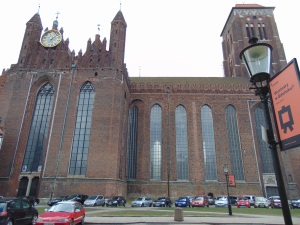 On our first full day in Gdnask we managed to venture out a bit more and found some more adventurous meal options.  Mono Kitchen was the first omni place we’d visited in Poland, and it really exceeded my expectations.  It was in a good location in the Old Town, just opposite this monstrous brick basilica, and was a little fancier and more expensive than any other places we’d visited.  Fortunately, it was worth the extra cost! 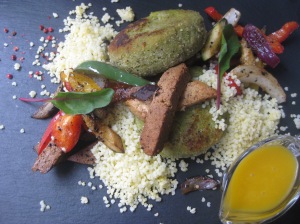 There’s an English menu available, probably due to its good touristy location, and there’s a little vegan section on the menu.  It includes one starter and one soup, two options for mains (although one of them is risotto, which is never tempting), and one dessert (alas, it’s poached pear).  There’s also a vegan smoothie, which was really good.  Unsurprisingly, we both ordered the ‘other’ main, which was a broad bean cutlet.  They really love their vegan cutlets in Poland!

We got two cutlets, which were nice and crispy on the outside and smooth inside, and tasted great.  The roasted vegetables were delicious, especially the aubergine, and I was pleased to see the sauce on the side so I could control it – I like my food pretty dry.  The highlight was the fried tofu.  I’ve never had such good tofu from a non-vegan place, but here we have some omni chefs who know how to season and cook tofu – it was so flavoursome.  I’d really recommend this place. 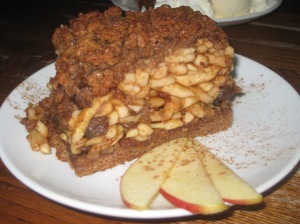 As I think pear is the worst fruit and nobody could convince me that fruit is a dessert anyway, we decided to try a cafe nearby that was listed on Happy Cow.  Retro was just a little way along the same street, and it was a lovely place to have a tea and cake break.  It’s a cosy, old-fashioned cafe with mismatched furniture and doilies.  Vegan options are marked on the menu (including breakfast dishes), and both soy and almond milk are available for hot drinks.  The eco apple pie is vegan, as long as you order it without cream and ice cream.  And good news:  it’s delicious!  The spiced sponge layer at the bottom was especially lovely, and the whole thing was tinged with cinnamon. 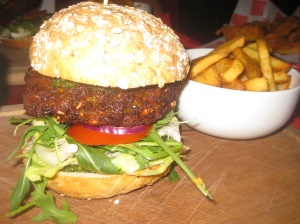 In hindsight, we wouldn’t have gone for that cake if we’d known about portion size at Casino Diner, our evening destination.  It was in the style of an American diner, and was playing the hits of Jon Bon Jovi, much to the delight of Dr HH.  There are two vegan options marked on the menu (English version available, and the staff spoke great English):  veggie burger and falafel.  When you order the veggie burger, make sure you specify that you want it vegan: the white bread buns and the coleslaw aren’t vegan, so they need to know to give you wholemeal and a generous side salad instead.  My interactions with the waiter led me to believe that the staff know what they’re talking about with veganism, which is always reassuring.

The burger was huge!  The patty was made with lentils, sweet potato, sweetcorn and kidney beans, and it was really tasty.  It was topped with a slice of melted vegan cheese, and below it was a good herby dressing.  The bun was toasted, the chips were perfect.  It was good.  The only problem was that it was a bit too greasy.  To my shame, I couldn’t finish the burger.  I’d like to go back on an empty stomach and have another crack at it though!

Gdansk itself was pretty and the food was great.  But I had a problem with it, and it was a problem that I wouldn’t have experienced had I not been travelling with the wonderful Dr HH.

Dr HH is many things.  First and foremost, he is warm-hearted, hilarious and hirsute.  He is, more’s the pity, a die-hard supporter of Manchester United.  He loves rock and metal, and has an astonishing memory for the lyrics of ’90s hip hop and rap.  He is able to fall asleep pretty much anywhere:  at the cinema, at a poetry reading, at the opera, and – my personal favourite – while standing up at a Jack White concert.  He has the coolest collection of t-shirts.  He is also a British Indian Sikh, with brown skin, a turban and a beard.  These things are just part of the package to most normal people, but for many in Eastern Europe they seem to be the only factors that matter.

In the Czech Republic people stare at him, but in Poland people actually commented.  In Warsaw a crazy woman started shouting at us when we kissed in the street.  Dr HH was also shouted at in a church and ordered to leave.  And the further north we got, the worse it got.  Gdansk was pretty rubbish in that regard.

My personal favourite incident involved a trio of louts about ten years younger than us, drinking beer on a bench.  They stared and sniggered as we walked past, then called “Muhammed Ali!”  Good work, chaps!  Wrong race, wrong religion, and, let’s face it, not really an insult.  This led us to a discussion on whether people ten years younger than us even know about Osama Bin Laden.  (Don’t get me wrong, that’s still the wrong race and religion, but at least he had a turban and is a more offensive comparison than a man whose nickname was “The Greatest”.)

My blood boils at these encounters, and I left Gdansk feeling quite bitter.  I always ask Dr HH:  “How can you be so calm?  I’m fuming!”  To which he replies that it is not his first time at this particular rodeo, and I should count myself lucky that I’ve enjoyed thirty years of white privilege on my travels.

So as much as I enjoyed the sights and meals of Poland, I won’t be in a hurry to return, particularly to the far-flung north.  It’s a little exhausting dealing with the ignorance, and it’s hard to maintain enthusiasm as a tourist in those situations.  The trouble really peaked here in Gdansk, though fortunately our last stop, Poznan, was plain sailing again (in the sense that nobody said anything – they still gawped openly though).  I’ll end my Poland posts on a high next time with that trip to Poznan.

8 Responses to Vegan in Gdansk