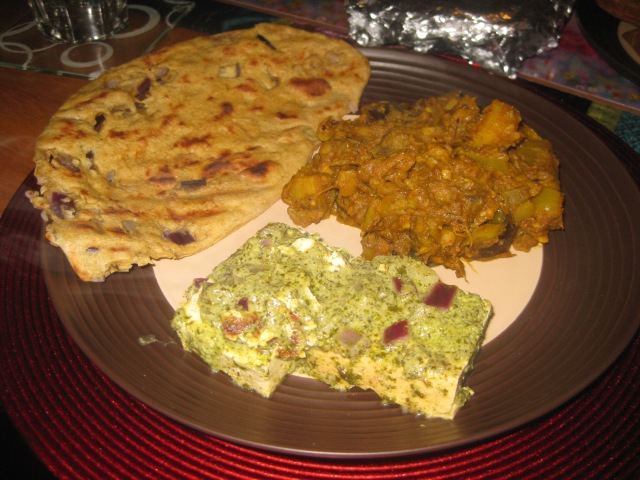 Recently I told Dr HH:  “I’d be sad without you.  What would you be without me?”  To which he replied, of course:  “Hungry.”  But he has been known to take to the kitchen occasionally (as documented here), with consistently outstanding results.  It’s been a while since I’ve shone a spotlight on his cooking skills, so let’s see what he’s been up to recently.

Last summer when we first arrived in Prague it was too hot to cook, or move, or do anything.  Dr HH handles the heat a little better than I do, so he battled away in our Airbnb kitchen to make this pasta dish.  Most of his meals include mushrooms and olives, and I can’t say I’m complaining. 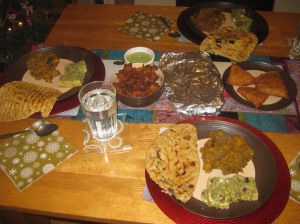 And for New Year’s Eve, he whipped up this Indian feast at my mum’s request.  Aubergine curry is probably his go-to dish – he cooks the aubergine till it’s just about melting away in your mouth.  He’s had a few experiments now with herbed tofu, in the style of paneer.  It’s coated in thick, green, herby deliciousness (better viewed in the photo up top).  I’m a big fan of this!  He is adept at making his own flatbreads, this time with some red onion chunks in as well.  There are some pakora and samosas on the table too, though we can’t give him all the credit for this:  this is his mother’s work, though he claims he helps with the construction. 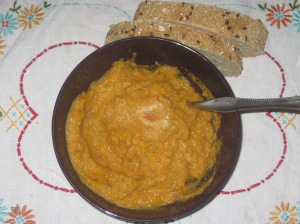 Sticking with winter time, this soup is a classic Dr HH recipe.  It’s so thick you can almost spread it!  And it’s full of sweet root vegetables and spicy paprika goodness.  This is a great winter dish that he served in bread bowls back in the UK, but packed into flasks for lunch on the go in January here.  It also gives him the opportunity to wheel out this line:  “I like my soups like I like my women:  thick and sweet.”  What a charmer!

Another classic:  he took his usual breakfast scramble recipe and served it with pasta, making a delicious dinner (and the leftovers made a tasty pasta salad).  He added chunks of tofu instead of the feta he used to use for himself.

He also frequently rustles up this salsa-type dish which we scoop up with tortilla crisps or pile onto bruschetta on weekends when we we’re too lazy to cook. 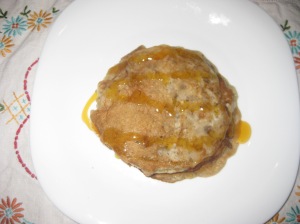 Dr HH took the helm with some of February’s cooking from Thug Kitchen.  These were his first ever pancakes.  He offered to make them on Pancake Day so I could put my feet up.  It’s quite difficult to relax, of course, when your loved one pops in every minute with a question:

“I can’t find the plain flour, is self-raising ok?”

“Did you say baking soda is bicarbonate of soda or baking powder?”

“Should I use a spoon or a whisk?”

“Does this look right?”

“How many minutes do they need?”

He was so delighted with the finished product that he proudly proclaimed he can take over as chief pancake maker in our home.

And he even followed through with these pancakes from Chloe’s Kitchen!  Another job well done, and with fewer questions this time.

He also made some savoury dishes from Thug Kitchen, which is more familiar ground for him.  Here’s the baked Spanish rice, which was used to make…

…and then served alongside these roasted sriracha cauliflower bites.

And he made a lasagne!  Apparently his vegetarian lasagne is his ultimate dish, and whenever he goes home, his family request it.  It’s so good that they actually eat it on Christmas Day.  Or they intend to, anyway:  the plan usually fizzles out as they decide to visit other relatives instead.  I find the updates on this almost too much to bear, as I like Christmas Day to be meticulously planned.  I imagine he enjoys getting this string of messages from me as much as I enjoy fielding the pancake questions above:

“Is the lasagne for dinner or tea?”

“What time are you starting the lasagne?”

“Have you started it yet?”

“What are you having with it?”

“Shouldn’t you have started the lasagne by now?”

“You’re going out?  But what about the lasagne?”

Anyway, I’m happy to report that he makes an excellent vegan lasagne as well.  Maybe I should start getting him to wheel this out for our special occasions too, though he needn’t think there’ll be any leeway on start times.

And he occasionally throws together some flavoursome mushrooms on toast for a nice light weekend lunch.  Mushrooms and olives again!

Bravo to the talented Dr HH!  As he will be on holiday in August while I will be back at work, we have agreed that he will tackle the cookbook of the month then.  I’m determined that it will be something with a baking section, because now that he’s mastered pancakes I’m sure he can take on anything!

This entry was posted in General and tagged vegan. Bookmark the permalink.