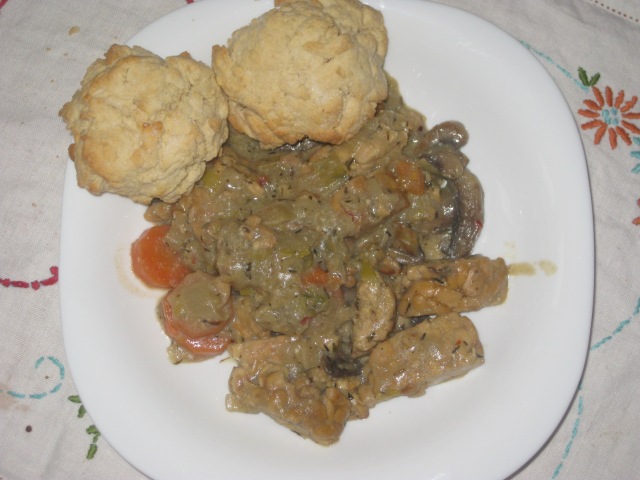 Last May I worked my way through Afro Vegan, so it seemed fitting to delve into Bryant Terry’s other book, Vegan Soul Kitchen, this May.

A few breakfast dishes!  At last!  This is the black brown green granola.  It was my first granola of 2016, and it was nice to get back on it.  It was nicely coconutty from a combination of oil and dessicated coconut, and I loved the different things going on:  figs, raisins, pumpkin seeds.  I’ll make this again.

The maple almond granola was a little less exciting, with only the title ingredients and some coconut oil to accompany the oats.  It was nice and sweet.  I chopped the nuts, as whole almonds are a big much sometimes.  Toasting the oats before adding the liquid is a really nice touch, I’ll definitely do that again. 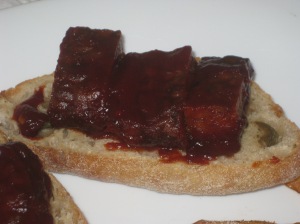 Afro-Vegan introduced me to the wonder that is the po boy sandwich, so I was rather excited to see another sandwich recipe in this book (and I say this as someone who doesn’t much care for sandwiches).  The open-faced BBQ tempeh sandwich was so good!  The spicy sauce was perfect.  I kept the tempeh in quite big pieces, but smaller fingers would work too.  I opted for the baking method rather than grilling, as we don’t have a grill, and it was all cooked to perfection.  Dr HH loves a good sandwich, and he was absolutely delighted with this!  (Alas, I didn’t get a good photo.)

I had to make a few adjustments to Uncle Don’s double mustard greens and roasted yam soup, based on available ingredients in Prague.  So it was spinach and sweet potato soup.  I was worried that there wasn’t enough flavouring in there, but from the roasted veg, garlic and vinegar it was really tasty.  Roasting veg before chucking it in a soup is always a winner.

At last, some good soups!  I simplified the creamy yellow potato soup with rosemary oil and crispy rosemary, by just chucking some dried rosemary into the soup instead – when you’re eating it from a flask, it doesn’t matter so much about a fancy garnish.  It was a lovely soup:  thick, creamy and tasty.  Very simple to make too. 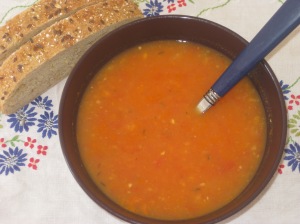 The charred plum tomato soup with sweetcorn was nicely spiced, and the sweetcorn chunks were a good addition.  Roasting the tomatoes was a nice idea, though I’m sure a couple of tins could be chucked in if you were short of time.

I made the succotash soup using cannellini beans instead of lima, as they are yet another thing I don’t know how to find in the Czech Republic.  I really like this kind of soup – quite thick, creamy from the beans, with good bits of sweetcorn.

I adapted the roasted sweet potato puree to make it into a soup.  I roasted the sweet potato in a bit less coconut oil and lots of garam masala to balance out the sweetness, then blitzed it with about a litre of stock.  Dr HH requested some chilli flakes to really make it sing, but I loved it as it was.

And I did a similar thing with the green pea and leek puree, before I remembered how nauseating I find pea soup!  Happily, this one had plenty of leek and thyme for flavour and I enjoyed it.  Dr HH found the soup a little too thin, whereas any thicker it would have reminded me of the abomination that is mushy peas.

I made wild style salad for a nice chilled lunch, and I enjoyed it more than Dr HH did – he found it a bit underwhelming.  I used a combination of wild and long grain rice.  The colours of the peppers are pretty and the dressing was pleasant.  Not mind-blowing, but a solid lunch or side dish.

The spicy mafe tempeh was a big hit.  Since I made this when cooking from Vegan Eats World, Dr HH and I have been obsessed with mafe.  This was the first recipe I made from the book, and it was sublime.  The deep, rich colour came from the red cabbage.  It was peanutty, the cabbage was crunchy and the tempeh was perfect.  It was also easy to make, and we’ll definitely be having it again.

I was a little concerned about the roasted root vegetable Ital stew, because having wintry vegetables (parsnips, squash, Brussels sprouts, for crying out loud!) in a coconut broth feels a little weird to me.  Fortunately, it was a hit taste-wise, and would be good with whatever veg you had around the house.  I made this on one of those scorching days where you can’t beat to stand near an oven, but it was worth the struggle. 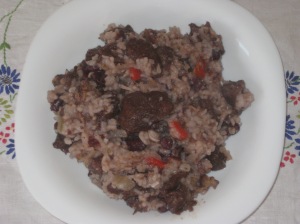 The red beans and brown rice with red wine simmered seitan was another hit, largely because we can’t get enough seitan.  I used white rice, because that’s all they have in the supermarket.  I simplified it by using tinned kidney beans.  It was good and filling, and the seitan chunks were unsurprisingly flavoursome.

I made the tempeh, shiitake mushroom and cornmeal dumpling stew with simple savoury scones rather than the cornmeal dumplings suggested.  This was perhaps the most delicious meal from the book.  The stew was so flavoursome and the tempeh cooked perfectly.  I would eat this again in a heartbeat.

The spicy chocolate cake from Afro Vegan is one of the best cakes I’ve ever made, but I only had chance to make one dessert this time around and it was not so cakey.  The chocolate-orange pudding was easy to make, and quite effective.  I used orange juice rather than orange extract, and it clearly wasn’t strong enough because we picked up the flavour of the coconut oil but no orange.  Still, it was creamy and chocolatey, and really improved with keeping.

I would recommend Bryant Terry’s books to anyone, and while I think Afro Vegan edges it a bit, this is still a really good book.  It’s not the easiest book to use in Central Europe – it has some very American ingredients (grits?!), which you might be able to find in the UK but not really in the Czech Republic, so that was a small hindrance for me.  Some creativity might be needed with the ingredients, but even with my various substitutions everything worked out well.

As in Afro Vegan, each recipe is accompanied by a suggested song/film/book, which lends a nice touch, and the descriptions of each recipe are really warm and inviting.  It’s good food and well-written to boot!  I’m not sure if I can wait until May 2017 to try his other book, The Inspired Vegan.

This entry was posted in Cookbooks and tagged cookbook of the month, vegan cookbooks, Vegan Soul Kitchen. Bookmark the permalink.

2 Responses to Cookbook of the Month: Vegan Soul Kitchen