Is there anything better than a buffet?  You get to try loads of different dishes, eat an obscene amount of fried food (if you’re lucky) and don’t have to worry about any unpleasant ingredients turning up on your plate (like celery *shudder*).  Prague has a plethora of pay-by-weight vegan/vegetarian buffets.  Buffets are great for tourists as, if you play it the right way, they fill you up for a long time relatively cheaply.  So, which ones in Prague are worth a visit? 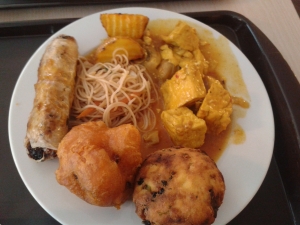 There is no shortage of Loving Hut restaurants in Prague, but the fairly central one on Na Porici is my favourite, because downstairs is a well-stocked shop, World Vegan.  It has lots of the vegan basics (grains, milk, snack bars), but also some pretty unusual stuff.  Cornettos, for example.

There’s always a lunch time buffet on, and we went a few times on Saturdays for some fried, meaty dishes.  There are always deep-fried options, most commonly the spring roll and cauliflower floret pictured here.  Then there are noodles, rice, vegetables and meaty main dishes, and a salad counter too.  However, a lot of the dishes are very similar.  The main dishes are usually tofu-based, rather than a more exciting mock meat for variety.  The spring rolls have the same eggy filling as the crispy ball at the front of the picture, and there was even another helping of this with spicy sauce dolloped over it.

You certainly won’t be hungry when you leave, but it’s not as exciting as it could be.  Also, the food isn’t always hot enough, even when we go at peak hours.  This was always our default buffet choice, until I decided to research the other options.  Now I know that there is a lot more on offer! 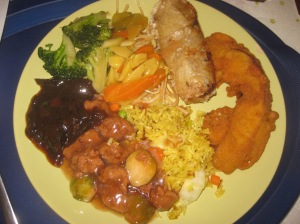 I don’t think Vegetka is affiliated with Loving Hut, though they were showing a video of the Supreme Leader when we visited.  The food is Asian, but it’s much better than Loving Hut:  more variety and creativity.  It’s quite out of the way, in Dejvicka, which means it’s a bit quieter than the more central locations.  The spring roll was excellent, and the battered vegetables were humongous and delicious (they also had aubergine slices).  The fried rice was really tasty and the black bean aubergine was sensational.  My favourite was probably the meaty chunks with Brussels sprouts – quite an unusual combination, but it really worked.

The restaurant is quite small, but it wasn’t busy when we went and the tables are quite well-spaced, so it doesn’t feel as chaotic as Country Life or Beas.  We couldn’t find any water, but we had free tea anyway, so no problems.

Veganland is somewhat off the beaten track.  It’s out in Prague 9, but it’s just a minute from the metro stop at Vysocany, safely nestled in the Galerie Fenix.  It’s also just a stone’s throw from Dr HH’s place of work, so he sees a lot of his colleagues getting lunchtime takeaway and we’d been hoping for a chance to visit for a while.  We managed to meet up for a lunchtime buffet one Friday, and were very impressed indeed.

Veganland is actually a shop as well as a restaurant, so it’s open from 9am-9pm, but only serves the buffet from 11am-7pm.  (I say “only” – you know what I mean.)  It’s another pay-by-weight buffet, and again, it’s heavily leaning on Asian cuisine.  There are always some deep-fried goods (we had spring rolls and cauliflower florets), rice and noodles, and a few vegetable and mock meat based main dishes.  I had some spicy prawn-style dish, flavoursome tofu curry, and good chewy meat pieces.  There was also some fresh sushi when we visited, and we shared a duck wrap as well, which was the real highlight.

Water is freely available:  hurray!  That’s not always a given in the Czech Republic.  The seating area consists of two gigantic tables, a counter at the window and a table for two in the shop area, so you might be sitting close to strangers.  Like any British person, when I’m seated close to people I don’t know I do my best to completely ignore their existence and pretend that this hideous situation isn’t happening.  Czechs, however, like to say goodbye when they get up, and we were even wished a good day.  What is wrong with these monsters?!

The shop has a small chilled section and lots of kinds of milk, grains, and the usual vegan goods.  There’s nothing outstanding there (they sometimes have Vego), but this was the only place I could find agar agar.

We’ve been back to Veganland a few times and always really enjoy it – it’s probably the best buffet of the lot, so if you are out in that area I would strongly recommend it.  (The picture at the top of the post is also from here.)

You may have noticed by now that we are not the kind of people who go to a buffet for salad.  We go straight for the good stuff, and Country Life had plenty of that.  For anyone who doesn’t follow our method, the salad bar looked pretty good.  Next to it was a cold section including the broccoli on the top plate and the burger and meaty chunk on the bottom plate.  They were all things that I think would have been better hot.

Truthfully, all of the food could have been hotter, but the warm-ish section was definitely the best (and we were there dead on noon, so it’s not that the food had been sitting out for hours).  The pizzas were good, and the mains section included a pearl barley and Brussels sprout stew, a layered vegetable bake and a mock-meat stew, which was fantastic with a helping of wedges (though they could have been crisper).

Again, there are water coolers for you to help yourself, and the restaurant itself is in a really nice space with good wooden furniture.  It’s pretty busy at lunchtimes, and it’s right in the middle of the tourist area, which can be a good or bad thing, depending on whether or not you are a tourist.  There was also a dessert section, which looked pretty tempting.

On Happy Cow, Country Life is listed as vegetarian and the reviews say most things are vegan but you can ask for confirmation.  As it’s self-service, though, there was nobody for us to ask.  The sign in the window proclaims it to be an entirely dairy free establishment, so I decided to accept that and help myself.

There are lots of branches of Dhaba Beas around Prague, and they are popular with the locals for lunch.  It’s vegetarian, with all vegan options clearly marked.  Everything I really wanted contained dairy, which was quite annoying, but I still did alright in the end, as you can see.  The samosas were really good, though not quite hot enough.  The chickpea curry was fantastic, and the dahl was nice.  The potatoes weren’t quite cooked through, more’s the pity.

There were lots of Thai dishes as well, but I’d planned on keeping it Indian…until I saw the sushi, and couldn’t resist.  We went to the branch on Belehradska and it was absolutely packed at lunchtime – people are really packed in, and it’s not the kind of place where you can linger after eating.  I found the atmosphere a little stressful, but the food was very good and reasonably priced, and there was a jug of water on every table.  Hurrah!

I’d been quite worried about trying the Etnosvet buffet, because when I emailed to ask if it catered to vegans (their evening menu doesn’t have too many options) they were very vague and told me just to ask on the day.  As it turned out, there were loads of choices.  The dish descriptions are written up on chalkboards, and all vegan options are clearly marked.  There’s a salad bar in the middle of the room, and hot dishes around the outside (alas, no vegan desserts).  The hot dishes are mainly stews, and I had some pilaf rice and rosemary roast potatoes, which were fantastic.  I had some seaweed and tofu, which was beautifully salty, peas and sundried tomatoes, a cauliflower curry and a meaty bean cassoulet.  Everything was good, and the temperature was ok.

The food was excellent and the restaurant wasn’t too busy, but the price would deter me from going too often.

Whatever your hotel location or preferred cuisine, one of these options should keep you happy.  I wouldn’t advise against visiting any, though I would discourage the tourist tendency just to make a beeline for Loving Hut because it’s such an established name.  While it’s not bad,I don’t think it’s the strongest of the bunch, so it’s definitely worth considering the other options too.  Happy eating!